Whoa. Maybe it should not have come as a shock. Well adjusted to the idea at this point, still at times, the inconvenience is overbearing. Not quite an athlete, but athletic for a lifetime, I knew going in that the aging process would take its toll. The answer would be to work out harder, to work out longer. What do they call it... the law of diminishing returns? Does that mean just "giving up"? You all know by now that this very thought burns my tail.

No, instead of surrender, we'll go with "whatever it takes, and then do two more". That's the ticket. So instead of forever chasing personal records for the mile set in high school, a PR for five miles set shortly after, or an all-time best on the bench that had been set well before my shoulders started falling out of their respective sockets, goals had to be reset in five year windows, and you know what?

Every once in a while, when goals are realistic, a "wanna be" athlete can still top a 15 or 20 year personal best... or win an age category in a local street race. Don't look at the times run, or the weight lifted. Compete, even against yourself. Want to feel young again? Try to win. At anything.

Days That End In "Y"

Monday afternoon. Fox Business Network on Sirius Radio. Liz Claman and Connell McShane are discussing record highs across our domestic equity landscape (the global needle is also on rock star mode), and Connell states... something along the lines of... "it must be a day that ends with a Y". Gave your old pal a little chuckle. So much truth in that short message.

The Nasdaq Composite and the S&P 500 have rallied steadily since early October. So it is that these markets have offered up four consecutive "up" days, the last three on truly impressive trading volume. So, it is that the Nasdaq Composite now stands 32.8% higher year to date, the S&P 500 up 27.3% over that time frame. Beyond U.S. shores, the Stoxx 600 as well as the MSCI All-World Index peak at the same time, even if the European macro has just not been as sharp as what we have seen in the U.S., or at least show signs of bottoming as we now see in China.

What markets do have is a Federal Reserve that has deemed it necessary to confront overnight liquidity issues through the expansion of their balance sheet. It is through the implementation of this expansion that the Fed has effectively nailed down the short end of the Treasury curve. Imagine trying to stimulate an economy through suppression of the long end? We really have to wonder about the thought process behind policies that had run for the better part of a decade that simply held back U.S. economic performance from ever approaching potential.

The markets also have a Phase One trade deal between the U.S. and China. While Phase Two might seem like "a bridge too far" at this point, what detail that is emerging from Phase One is starting to look like we can trust it. The Chinese are going to have to aggressively purchase U.S. agricultural goods. The number $40 billion per year has been thrown around. Prior to the trade war, the Chinese would purchase a rough $24 billion or so from U.S. farmers and ranchers. They still need the soy, and other grains, as they always have. The difference is that 55% of China's entire herd of hogs has now died of the African Swine Fever, and now there is evidence that this deadly illness has crept into Eastern Europe. Pigs are dying. People need protein. Pork is such a source. China has a lot more mouths to feed than anyone else, and pork is a dietary staple in that part of the world.

Markets also have the USMCA, where it appears that the U.S. and Mexico may have resolved what arose as a labor dispute. This enables this new trade deal, that is indeed incrementally better for U.S. business than the old NAFTA that drained the U.S. middle class of employment opportunity to be voted on ( and ratified?) by U.S. legislators later this week.

The clarity, and not to mention the decisiveness, of the election in the United Kingdom put the UK on perhaps the most expedient path toward Brexit possible at this juncture. Whether folks like it or not, this removes one veil of uncertainty from that corner of the world, and allows the UK to negotiate trade deals not only with the single market, but maybe also with the USMCA nations. Note that the words "North America" have been removed from the acronym there.

Now we pause. The word "melt-up" is making the financial media rounds. Put on the radio. Read your favorite websites. Talk to your colleagues. You'll hear that word, followed by he question... "So, whaddaya think?"

I don't know what all of the other talking heads think (and I don't care), but I will tell you what I think. I think fourth quarter earnings growth will still come in quite sloppy, perhaps as poor as the -1.3% expected. Beyond that, I think that the animal spirits already quite visibly start to impact the numbers. Right now, first quarter expectations for the S&P 500 according to FactSet are running at earnings growth of +5.4% on revenue growth of +4.4%. For the calendar year, it gets better with earnings growth expected to land +9.7% on revenue growth of 5.5%. Now those are some pretty aggressive numbers for growth in profitability, but those revenue numbers, in this climate? Beat those solidly, and the margin will be there. In size.

But, Sarge... Aren't We Overbought?

Good question. Quite frankly, we are, in the short-term. You are going to see some profit taking ahead of Santa. At least, that's what I think. That's just how algorithms are structured for the most part. Much of this will not be a sentient decision made by very (very, very) handsome traders wearing colored jackets as the cameras flash.

On daily charts, Relative Strength (on daily charts) for both the S&P 500 as well as the Nasdaq Composite closed above 71. For the new kids, the threshold that most of us look at as short-term over-bought is around 70. That does not mean that the condition can not persist for some time as this is a guideline. Through the use of Select Sector SPDR ETFs as a proxies for broad sector performance, one quickly sees that among the 11 sector ETFs, only the REITs now run with an RSI (Relative Strength Index) reading below 50 (neutral), while nine of 11 now stand above 60. Incredibly, the Health Care Select Sector SPDR ETF (XLV) after the street learned that some Obama-care era taxes on medical equipment would be removed, now runs with an RSI of 77. You read that right. 77! I have highlighted relative strength for this fund in blue, for newer traders. Note, that XLV has been technically overbought since mid-November, or about the time that the most left-leaning candidates for the Democratic presidential nomination started to fall behind their more centrist competitors. 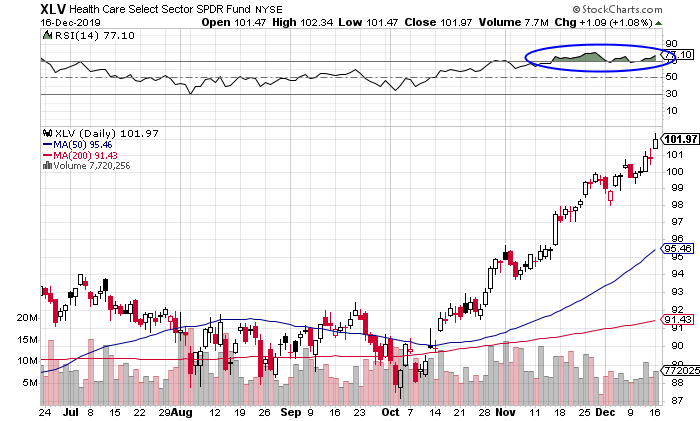 I had just started on Wall Street. I was young. I thought I was tough. There is no doubt that I thought (actually I knew) that I was invincible. This was back when New York City was a dangerous place. Before the gentrification of the 1990's that has only started to abate in recent years. I waited for the uptown "4 train" at Wall Street station. Hot. Humid. Gross.

A flash. He came from behind me on the run. A gold chain snatched off of the neck of the woman to my front. Toward the end of the platform, he ran. My left arm was in cast. This young thug had no expectation that his choices had been poorly made that day. Down on the tracks and into darkness... toward Brooklyn. That guy with the cast jumped down on the tracks and chased him right into the darkness. Some guys aren't so tough when they get caught by a ticked off guy wearing a tie with one arm in cast. Oh, the terror. The pleading. Good times. The woman in the story got her chain back, btw.

I found it interesting to read in the Financial Times on Monday that, according to Refinitive Lipper, a net $156 billion in capital has exited U.S. focused equity funds in 2019. (-$248 billion for mutual funds, +$92 billion for ETFs). That dough landed in money markets and bond funds. You wanted a melt-up? See those four supportive reasons up top? This one here is number five. A whole lot of folks either got scared out of equities, or simply were recipients of lousy advice. This is why I think it key to learn how to manage at least some of your own money. Financial advice is fine. There are very good advisers. There are also some who stun me when I here them speak. Know your stuff so that you'll recognize when they don't know theirs.

Now, market pricing at least in theory is the result of demand and supply, but not necessarily in aggregate. This balance is then sifted through the window of micro-second timing. The suggestion? There will be a pressure on those underperformers to chase the markets, and this pressure will be exacerbated by the January effect, also known as "new money." Just as folks tend to move in June, or pay tuition in September, thus causing outflows, enough folks get paid in late December/early January to make this impact a reality. The jolly guy with the long beard? Yes, Virginia, there really is a Santa Claus. The fat man is coming.

Get an email alert each time I write an article for Real Money. Click the "+Follow" next to my byline to this article.
TAGS: ETFs | Federal Reserve | Investing | Markets | Stocks | Technical Analysis | Trading