May You Live In Interesting Times

Here's a secret for you. Everyone's times are interesting. You and I both know someone who is always sicker than everyone else, always has a tougher job than everyone else, and grew up in the toughest neighborhood... ever. That person, who might be referred to as a toxic personality, always having to one up everyone's story. Our modern society is sort of representative of that individual in a metaphorical way.

Congratulations. You and I are among the many. We may not be living through world wars, or prolonged global plagues, somehow though we manage to exist in an age that might be difficult to explain if not true. Though, my bet would be that if we could go back in time and ask strangers from several different epochs for thoughts about what transpired during their lifetimes versus what we face to our immediate front, they might downplay what concerns us so much. We often see how easy it is for one generation to overplay how much more difficult it was back in "our day", easily overlooking what stresses impact enter the individual thought process of others. Everyone, and I mean everyone believes that their own concerns to be of paramount significance. Guess what? Everyone is right. What matters in every age, is simply what matters. Period. No comparison is necessary. The environment provided is all we need to adapt to.

So, we may not have to deal with world wars, or plagues on the scale of past generations. That said, this week or this month shape up as fairly significant as in relation to what we see in our rear view mirrors. In fact, I would go so far as to say that the market volatility that we have seen over the past four weeks or so, were really just a function of pricing in the probabilities of different outcomes when it comes to:

The six month grace period ended with the stroke of midnight. Now, cheaters could face U.S. sanctions of their own, except for the fact that it looks like as many as eight temporary waivers have been granted to allow certain players more time to re-source their national supplies. These waivers are expected to include both China and India, who just happen to be the top two importers of oil from Iran. There is evidence that sanctions are already starting to hurt Iran a bit as production started to noticeably drop as early as July. It also appears that enough producers are more than willing to step it up in response to Iran's reduced participation.

Typical behavior? A large group of talking heads seem to think so. The time tested pattern of seeing markets sell off running into domestic midterm elections, and then running higher after that election is half way home. We got the selloff. Oh boy. Now that market participants have eaten their vegetables, will they get their pudding? History suggests that should expectations play out that the Democrats gain limited control over the House of Representatives, but not the Senate, that the ensuing legislative gridlock has never been a problem for investors. Should the Republican side exceed expectations, my thought is that there should be an exaggerated short-term reaction to the upside for equities in anticipation of further fiscal stimulus. That this fiscal stimulus must one day be paid for is not this week's problem. I need something to write about in 2019. I would also expect an exaggerated short-term reaction, but in the other direction should the Democrats exceed expectations, as efforts would then be made to put a certain level of regulation back into industries that have made nice progress over the past two years, not to mention the political fallout. This outcome would also be a severe negative in my opinion for a group that I had been wrong on this year... defense and aerospace.

The incredibly strong October labor report produced by the BLS on Friday put monetary policy back in focus. You all know that I have felt that the Fed had been too aggressive. That argument is now pointless. Not that I was wrong on this, I really doubt that I was, but now the hawks at the FOMC have all that they need to stay on point, and posture aggressively. I see what other economists see, a slowing across several slices of this economy, as well as a tariff assisted inventory push into the third quarter. Nevertheless, I can not remember a month where we saw a dramatic upward pop across key areas such as job creation, wage growth, and participation that left no negative impact on the headline unemployment rate. Some readers who have not spent a career studying these kind of statistics may not realize just how special that is. A baseball analogy might be the same player going four for four with four grand slams while also pitching a complete game shut out. Doesn't happen.

The Fed will use this Thursday's policy statement, that is not scheduled to bring with it the entire dog and pony show, to set up just how hawkish the Fed intends to be in December and beyond.

4) The coming G-20 meeting between Presidents Xi and Trump.

This does not happen until the end of the month. Still, let's face it, headlines on this subject matter are possibly what has pressured markets the most overtly. Argentina is where ... the resolution of the trade war between the U.S. and China either meets the beginning of it's end ... or runs into the end of it's beginning. (To borrow from Winston Churchill.) We'll get into this in greater detail as the next few weeks pass. This market-impacting story does not present as tactical to this weeks' trade as do the other three market themes, yet this issue remains possibly the most strategic among them.

Earnings season is not over. Though many of the highest profile names have already gone to the tape with their third quarter results, there is enough juice left in the season to impact the marketplace, and basically all of the retailers are still out there. Of those counting themselves among the S&P 500, 188 companies will report this week. As of now, the season is going well in terms of EPS beats, earnings growth (almost 25%), and revenue growth (more than 8%), as all three key measures are outperforming expectations to a limited degree.

One That Got Away

During the October meltdown, I passed around some advice on getting oneself to a more defensive portfolio allocation. I threw around names such as Verizon (VZ) , Seagate Technology (STX) , KeyCorp (KEY) , and Pfizer (PFE) as hideouts that had good track records on meeting dividend payments regardless of market conditions. I also threw my oil names at you... Royal Dutch (RDS.A) , British Petroleum (BP) , and ExxonMobil (XOM) . Al of these names did help ease what was has been a nasty bout of volatility.

I missed one, not just for you, but for my own book as well, that I really can't believe I missed. My bad, because this name had been one of my staples in the past. That name is Altria (MO) . The name reacted well to Q3 earnings that were released on October 25th. Cigarette volume dropped off a bit, but there was a surge in smokeless tobacco usage. Have an ethical problem with investing in tobacco? That is understandable. Then, this is not for you.

Altria pays out a quarterly dividend of $0.80, good enough at these prices for a yield of slightly more than 5%. The track record? This dividend runs with a five year growth rate of more than 8%, and a ten year rate of more than 11%. On top of that, the stock has performed, but is that move done? This name does trade at less than ten times forward looking earnings, but obviously can not be valued as a normal equity. 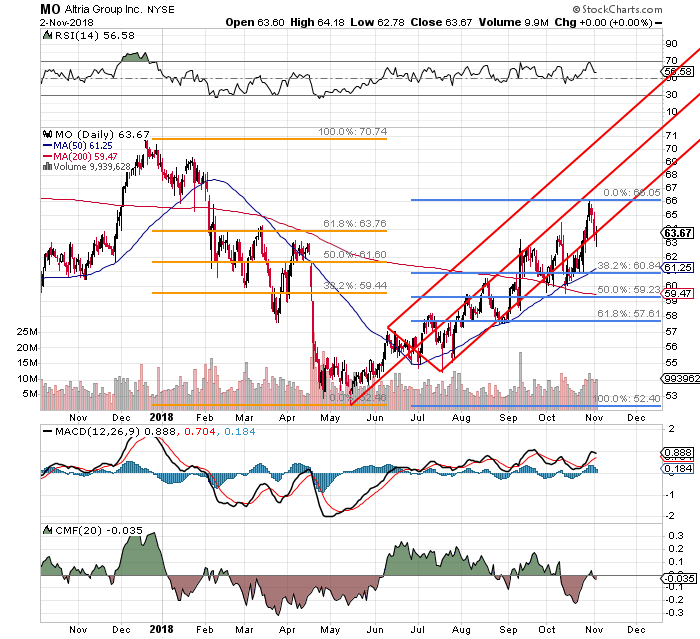 We see here loose adherence to both Fibonacci and Pitchfork models, but not a true obedience. The stock did experience the benefit of a technical reaction to a "golden cross" in mid-October ahead of earnings. I would love to grab some of this stock for my dividend book, but you know that I hate to chase. In fact, I just do not do it. I would love to somehow take a three or four dollar discount. If only there were a way.

You could just buy the equity at or close to the last sale of $63.67. A long-term investor would receive dividend payments totaling $3.20 per year at the current rate. If left alone, this would drive that investor's net basis considerably lower over time. I have another, faster idea. The firm reports again in January.

3) Equity sags below $55 by January: Trader would then be long 300 shares at a net basis of $57.86 (including the dividend payment on 100 shares.) This trader would at that time, sell three covered calls to further reduce that basis.

(BP and WestRock are holdings in Jim Cramer's Action Alerts PLUS member club. Want to be alerted before Jim Cramer buys or sells BP or WRK? Learn more now.)