Jim Cramer focused on some industrial names in his column this morning (Monday). For example, there's 3M (MMM) , which intrigues, with a 3.4% yield, and with a price tag of $170 down 3% for the year. "I like this one as a Trump play because I think it's been held back by worries about old pollution claims that would be sloughed off under a distinctly anti-environmental president", Cramer writes. "Lots of China here, not bad with a 20 P/E."

In this daily bar chart of MMM, below, we can see that prices made a deep decline from January to late March. MMM bottomed and turned upwards with the broad market recovery. The rally from late March is different from many other charts I have reviewed since March. There is a pullback in May that retraces half of the previous rally. Many other charts, especially the tech leaders, had much shallower corrections. There is another correction into early August that retraces a large part of the May to June rally.

In September there is a third retracement that is much shorter in duration and much more shallow than the previous two reactions. This tells me that the rally and the buying interest in MMM has become stronger over time. Prices are now trading above the rising 50-day moving average line and the still declining 200-day line.

The On-Balance-Volume (OBV) line finally made its low in May and its subsequent advance tells us that buyers of MMM have been more aggressive.

The Moving Average Convergence Divergence (MACD) oscillator has been hugging the zero line since July but appears to have turned upward for a new buy signal.

In this weekly bar chart of MMM, below, we can see that prices have broken a longer-term downtrend. Prices are above the still declining 40-week moving average line.

The weekly OBV line has climbed to a new three year high and confirms the price gains this year.

The MACD oscillator crossed above the zero line in August for an outright buy signal.

In this daily Point and Figure chart of MMM, below, we can see that a trade at $173.49 is an upside breakout. The chart indicates a potential price target of $202. 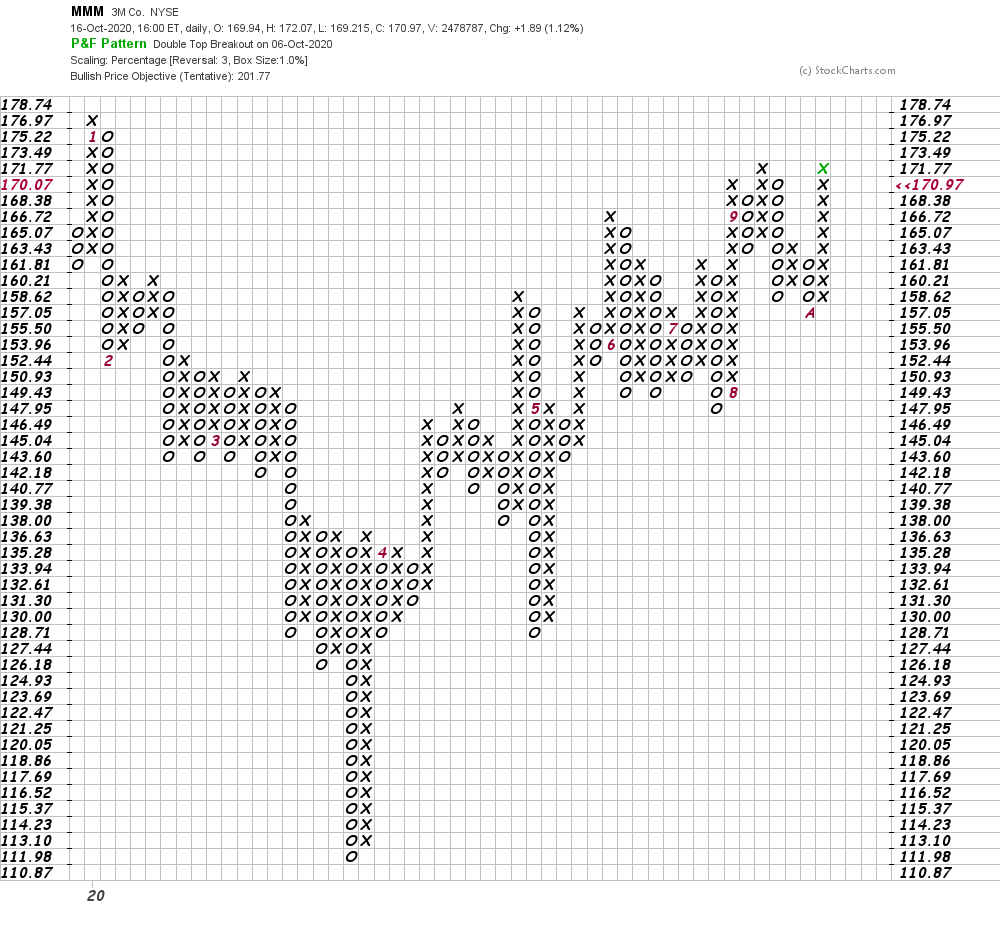 Bottom line strategy: The charts of MMM were showing improvement back on September 17 and now today as well. Aggressive traders could go long MMM around $170 risking a close below $160. The $202 area is our price target.

Get an email alert each time I write an article for Real Money. Click the "+Follow" next to my byline to this article.
TAGS: Economy | Investing | Markets | Stocks | Technical Analysis | Trading | Industrials | Mad Money