Back in the late 1990s, I was living in Singapore. In that expat community at the time -- our social circle -- there were many folks who were the "head of Asia" for their companies. Remember that back then Asia was nowhere near the size it is now in terms of global markets; China had only opened up to the world a few years prior.

Most of those companies were what we commonly referred to at the time as the "old economy." Folks who were around back then will remember the old economy/new economy commentary. It was basically thought that any stock from an old economy world was not worth buying, but new economy stocks? Well, they were the only game in town. Sound familiar?

I even remember Michael Lewis wrote a book titled, "The New New Thing," which was about, well, the new economy. It was published in the fall of 1999.

I can remember that time period rather well, because sometime around Thanksgiving we had a gathering with our social circle and one man, who was the head of Unilever Asia, came up to ask me if I had read the book (I had). He then wanted to express to me that the top brass in his company thought it was ridiculous how much value was put on the new economy stocks when no value at all was put on the old economy stocks (like his).

Shortly, others joined the conversation. The Asian head of an industrial manufacturing company, the head of an energy company, and so on. They were so frustrated with this new economy thing and how their stocks not only couldn't rally but were getting sold on a regular basis.

Something had to give! they said.

I am reminded of this now, as I watch energy stocks unable to catch a bid. Bank stocks languish. Industrial stocks are stuck in the mud. Retailers, paper companies, transports, even drugs (not biotech, though) are all left for dead.

I think there is a difference between now and then, economically speaking, and that is that back then it was the market that was dissing them, but the economy was OK. Now, these stocks reflect the economy, which isn't great. And then there are the new economy stocks.

At some point the spread gets too wide and something has to give. I would like to be able to pinpoint when that will be, but I can't. Back in the late 1990s, breadth actually started to finally improve as the market indexes topped out in the spring of 2000, because all those old economy stocks came alive.

Right now we have so many stocks that are sold out -- they simply aren't even going down anymore, or they are going down by nickels and dimes. But they cannot lift themselves up to find any buyers. In the meantime breadth is not as horrible as it was in 1999, but it continues to lag while sentiment stays elevated with this week's Investor's Intelligence bulls rising to 57.7%, the highest since January when they were at 59.4%.

The Daily Sentiment Index (DSI) did a good job with the Tuesday pullback and the Wednesday rebound took Nasdaq back to 87 and the S&P back to 85. So one or two more up days and the runway runs out one more time. 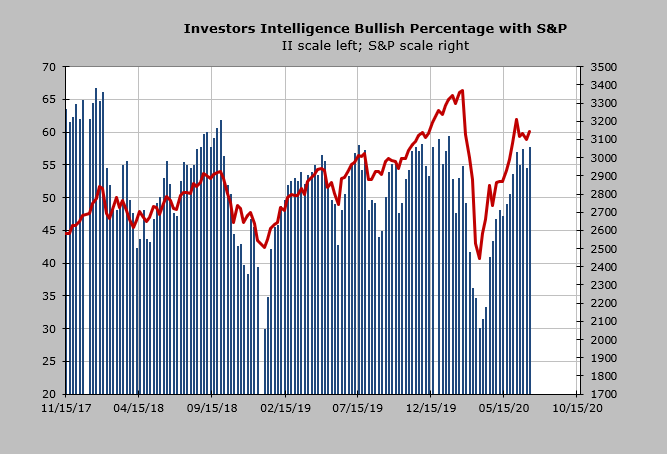 Get an email alert each time I write an article for Real Money. Click the "+Follow" next to my byline to this article.
TAGS: Investing | Stocks | Technical Analysis | VIX | Asia | China |