One of life's simple pleasures for your pal has always been swimming, floating, kayaking, doing whatever, but in the ocean beyond the surf. In the days before keeping my shoulders in their sockets required constant effort, body-surfing was for me, a real joy. There are times though, especially when beaches are deserted that one must pay more attention to certain factors that could turn good exercise into a dangerous afternoon. Things like undertow, rip currents, rough seas, and occasionally wild animals can ruin the day if swimmers allow themselves to become careless.

I found interesting the news that investors in aggregate had pulled $25 billion out of domestic exchange traded funds in January. Why this is interesting is that U.S. equity markets, as we all know, have rebounded significantly in 2019. In fact, if this is indeed your racket, my guess is that you are currently running at year to date performance that would look pretty sharp if only December performance could magically be wiped clean from short term memory. I well understand the balancing of risk, in fact if you're new, I preach on it often, but this smells a little different to me. As this story seems to express a cautious sentiment, investors at the same time also appear to have become optimistic as the central bank has signaled less aggressively, and actual hope has crept into the conversation regarding the trade condition with China.

To me, I take this two possible ways. Both may be true to varying degrees. Since the day after Christmas I feel that maybe something of a sellers' strike has been in effect. In other words, the horrible December selloff stopped when it did because everyone who was willing to sell, sold, and everyone else hung on with both hands. Secondly, perhaps the extreme volatility of the fourth quarter that was at least partially due to the broad strokes that more passive styles of investment paint with. Could a more "do it yourself" style of stock picking have returned to vogue? At least for some folks? That would indeed be nice, as well as in my opinion increase efficiency at the point of sale.

If by chance, markets have rallied only because of the concept of a sellers' strike, even while investment dollars have left the building, then what we still have is a contracted market in terms of size, if only temporarily. That would essentially mean a reduction in liquidity, making the Fed's pause when they did, crucial. Could it be that the real catalyst for the shift in investment is a rapid reevaluation of Q1 2019 by industry analysts in terms of earnings projections? According to FactSet, consensus for the current quarter in regards to profit have not only dwindled, but have gone growth negative, even while revenues appear steady, We have warned on the potential for something like this well ahead, in his column as Q4 2018 (the reporting season now in progress) presents as the last favorable year over year comparison thanks to the changes made in 2017 to the tax law.

Mix that fact in with other margin pressures such as increased business costs resultant of the trade war with China, as well as volatility across the energy space that has certainly messed with not only estimates but margin across other reliant industries. Estimates almost always contract as a quarter draws closer to it's completion. The sectors suffering the most dramatic negative revisions to Q1 profits are that Energy sector as well as Tech and Materials, all growth, or lack of growth stories. Hence, the optimism over China. One note of caution. The EU still beckons. Should President Trump feel emboldened by a China deal that feels like a win/win, that could be the next fight, and that.... could turn expectations for earnings growth of just 1.6% for Q2 into an earnings recession. This is not being mentioned yet in the financial media, but this is in my opinion, the catalyst for the next selloff. Be cognizant. Then again, given just how wrong analysts have been in aggregate on such a regular basis, why take their consensus over anyone else's opinion?

Happy Lunar New Year to those celebrating. While many Asian markets are not participating today, and that could lesson to some degree trading volumes on Tuesday, President Trump will finally be permitted to offer up his State of the Union address well after the close. Word is that the president will call for national unity, while threatening to declare an emergency at the southern border in order to find funding to further the building of his wall. That may or may not impact markets. What will impact markets for sure will be Federal Reserve Chair Jerome Powell's town hall style address on Wednesday evening.

Key to note there would be that the president met with the Fed Chair on Monday evening. For those interested, that town hall address will be accessible to all at the Fed's website.

2) The San Francisco Fed yet again published as research a paper that I doubt I would accept from a freshman economics student. The thesis of the paper is that negative benchmark interest rates might have sped up the recovery post-crisis. Apparently, the European continent was not reached for comment. I could write an entire piece on this, but that would be unfair to readers. See it for yourself at their website, and then you'll understand why academic economists can never be left in positions that imply any kind of authority over policy application.

Okay, when it comes to the Walt Disney Co. (DIS) , I'm biased. Know that up front as I go about my business, and tell you what I think about the stock, and it's potential. First off, Disney is expected to go to the tape with the firm's fiscal first quarter results after the closing bell tonight (Tuesday). Consensus view is for EPS of $1.55 on revenue of $15.05 billion. Those numbers if realized amount to EPS growth of -18% on revenue growth of -2%.Hmm, ugly? Right? Not entirely. Let's dig in.

We'll start with the studios, because that is where the uneven comparison really is. For the quarter, Disney released two 'blockbuster" movies, one being a Mary Poppins sequel. A year ago, the studios released three "blockbuster" movies, one of which was Star Wars Episode VIII, and another a Thor movie. In terms of global box office, the two 2018 high end movies add up to less than did the third place of those three 2017 entries(COCO). Given this, mixed with continued expectations for the impact of cord-cutting across the cable networks, this leaves the firm in a very interesting spot. There will be growth in the resorts and theme parks as they have been crowded and the firm has enforced it's pricing power on the consumer, but that is not why investors will tune into the conference call on Tuesday evening. Any position taken in between publication of the numbers and the actual call would be in my opinion, akin to gambling.

There's a lot going on that CEO Bob Iger will have to get detailed on. Start where you want, but Iger has to discuss in detail, the expected launch of Disney Plus, the streaming service that will compete with the likes of Neflix (NFLX) , Amazon (AMZN) Prime, Alphabet's YouTube, and AT&T (T) . After the success of ESPN Plus, much is expected here, and the fact that the firm is the king of content should position it at an advantage to the competition in terms of expected margin once initial expenses are stabilized. Then, Iger will have to guide on just how well the takeover of the various assets at 21st Century Fox (FOXA) , (FOX)  is progressing. By the way, Fox reports on Wednesday. That deal, by the way, will leave Disney in control of Hulu, another streaming competitor, enhance the firm's broad control over content, and force the sale of the Fox regional sports networks.

As an investor, I need to hear a firm date on Disney Plus, and a precise dollar number as far as cost synergies are concerned on the deal with Fox. 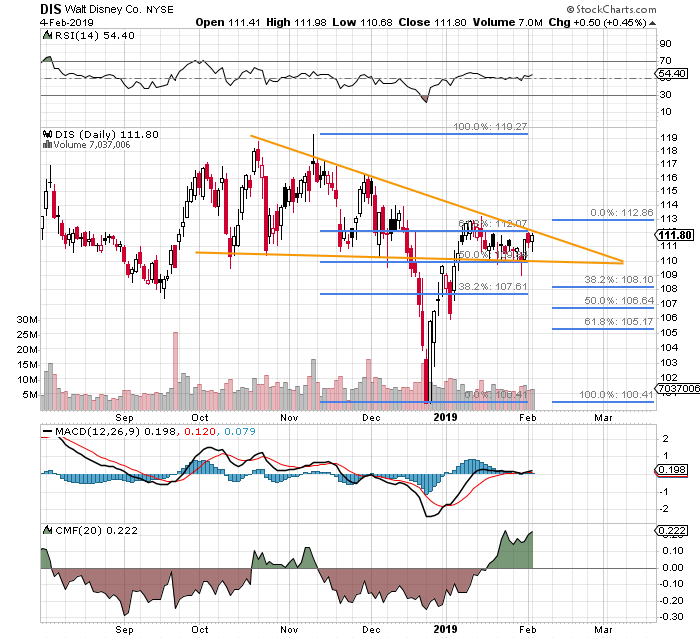 We see here that the stock's rebound off of the December lows has stalled just above Fibonacci resistance as earnings approach. The top orange trend line illustrates a series of lower highs, the lower line a stable base if the sharp selloff is exempted from the model. This may skew the result, but it is how I am advancing. In my opinion, the second Fib model to the right displays various catch-points for the shares should they be displeased with what they hear from Iger this evening.

Get an email alert each time I write an article for Real Money. Click the "+Follow" next to my byline to this article.
TAGS: Earnings | Federal Reserve | Investing | Markets | Options | Stocks | Technical Analysis | Trading