One might think upon first glance that Tuesday's equity market pricing across equities, coming off of a three day weekend, to be inconsequential. After all, the now obsolete Dow Industrials (still a financial media fave) picked up 0.13%, while the far more important S&P 500 and Nasdaq Composite surrendered 0.05% and 0,09% respectively. While these three large cap indices seem to send a quiet message, that message would be incorrect.

How important might it be that large caps reacted negatively to a strong revision made to the May Markit Manufacturing PMI, and then 15 minutes later, as these large caps tried to make a stand, were hit yet again as the ISM (Institute for Supply Management) released their Manufacturing survey for May? How important might it be that the S&P Mid-Cap 400 put together a rally of 0.63% or that our small-cap indices again out-performed everyone else... the Russell 2000 sporting a 1.14% gain, and the S&P 600 an even gaudier 1.57% rise for the session. Demand has been slanted toward smaller caps for a little while now, regaining what luster might have been lost earlier in May. For the year, the S&P 600 is now 24.53% higher, competing directly with the Dow Transports for recognition as this market's alpha dog as that index, now up 26.07% year to date has more than doubled what the S&P 500 (and Dow Industrials) have done, while more than quadrupling YTD performance by the large cap Nasdaq indices.

The smaller names also colored equity market breadth more so than anything those large caps did on Tuesday. Breath was to put it quite simply... excellent. Winners beat losers at the NYSE by an impressive 5 to 2, and at the Nasdaq by almost 2 to 1. Advancing volume crushed declining volume (by more than 4 to 1) at the NYSE on increased aggregate trading volume. That's bullish friends, plain and simple. Advancing volume also easily outplaced declining volume up at the Nasdaq, which is nice, but on reduced aggregate trading volume making the rest of the data less impressive... and symbolizing the "all or none" theme that seems to run through our algorithmically controlled marketplace most days, these days. That make any sense? I think it does.

The ISM survey results released on Tuesday showed us a few trends that, to me, at least appear as potential if not troubling question marks on the horizon. For one, strength in New Orders, the life blood in any manufacturing based report continues to grow, now at an almost 17 year high pace of acceleration. As U.S. industry finds itself unable to meet this pressing demand, "Backlog of Orders" are accelerating even more quickly than are those "New Orders". This has forced delays in deliveries. Wait times are now at their longest since 1974. I was a child. That's a long time. Inventories at manufacturers did somehow manage to cross into expansionary territory even if just by a smidge. However, customer inventories continue to dwindle to levels hard to imagine. "Just in time" ordering appears to have backfired significantly on large swaths of the economy. So precise, so streamlined... so reliant upon nothing ever going wrong.

Growth in manufacturing based employment slowed to a crawl, in fact employment just barely stayed out of contraction. That's a potential problem as this is most likely a supply problem as much as, if not more than, a demand issue as many respondents indicated an inability to fill open positions. Prices continue to scream ever higher at an incredible pace and have done so for 12 months now (which is longer than you thought). What do I think? Higher prices. Inevitably higher labor costs. Demand chasing constricted supply. Wait times that might afford price control over prioritized shipping. All smells like pressured corporate margins to me. Now, throw in an increase in corporate taxes that further pressures margin, and increased taxes on personal income and/or capital gains... that even if placed only on the highest earners will significantly impact aggregate demand... and the picture gets a lot less rosy.

A cyberattack against JBS S.A. (JBSAY), the planet's largest meat producer launched by a criminal organization believed to be running out of Russia (But... this is certainly unclear at this time.) had been discovered on Sunday, and by Tuesday had managed to cripple operations in Australia and across North America. Yet another ransomware attack launched against key global infrastructure... in this case... food supplies and food security. JBS S.A. provides the United States with 23% of its beef supply. Tyson Foods (TSN) for comparison's sake provides 22% of the nation's beef, while privately held Cargill provides 18%.

The shutdowns also scuttled the U.S. Department of Agriculture from releasing wholesale prices for both beef and pork on Tuesday which is something the department does on a daily basis. By early Wednesday morning, Bloomberg News was reporting that JBS S.A. had made "significant progress" and will have the "vast majority" of the firm's plants in operation on Wednesday. This was an update to a story that ran on Tuesday night explaining that the firm was in the process of trying to contain the damage.

Will the seemingly constant ransomware attacks on industry and infrastructure finally lead regulators to a place where there must be some kind of action taken to crack down on the use of cryptocurrencies by those with nefarious intent? Actions such as we have seen with Colonial Pipeline only encourage such activity, and encourage demand for cryptos, in part because the victims of such attacks must then participate in those markets. This is an increasingly common problem that will force the hand of national regulators, who one would have thought might need little in the way of provocation to defend their "turf", their "(monetary) base of power."

AMC Entertainment (AMC) CEO Adam Aron spoke of "playing offense." He wasn't the only one. AMC sold 8.5 million news shares to hedge fund Mudrick Capital Management ahead of Tuesday trading for a cool $230 million (plus) in proceeds at a price just above $27 per share, effectively diluting the firm's shareholder equity. Offense.

Mudrick had reportedly exited the entire stake by day's end. We don't know precisely where, but we do know that the shares traded up 22.7% for the day closing at $32.04 after trading as high as $33.53. Mudrick had taken advantage (as a good trader might and probably should) of the "meme crowd" that poured into the name despite the fact that fundamentally (which means nothing here) the shares should have been worth less after the 8.5 million shares had been added to the float. Offense.

Lastly, there is that meme crowd who are pure momentum players and probably as much if not more, professional and algorithmic in composition than they are the retail trading crowd that the media likes to portray them as. Oh, the retail crowd is there, but they are the caboose. The locomotive would be, most likely in my opinion, high-speed and algorithmic and driven to incite market overshoot. The main body of the train would be those short sellers who are once again being taken out to the woodshed. AMC is up another 30% plus overnight. I see a last sale just below $42 right now. Offense.

Two weeks ago (the last data I have), more than 21% of the entire float of AMC was held in short positions. These positions are being liquidated. This week. What am I doing? I have purchased a few puts at various lower strike prices and across several expiration dates for as close to peanuts as I can get them. There has been a tremendous imbalance in the market value of upside calls versus downside puts for AMC of late. I will likely add today as the shares are trading even higher. Why? Because I am not crazy enough to short these meme stocks, but I do believe that the momentum winds down, so any downside shot I take must be taken with my risk defined.

Abbott Laboratories (ABT) sharply reduced forecasts for COVID-19 testing sales as well as corporate earnings for the full year to levels well below both previous guidance and more importantly Wall Street's consensus view. This is a good thing because it must mean that less and less people are feeling sick enough to go get tested. Is this opportunity knocking for investors?

I took it that way. I initiated the name late, close enough to where the shares closed on Tuesday during the regular session. Not that I know anything for sure, and I certainly am rooting against the virus. Abbott Labs has a strong enough balance sheet, has enough cash on hand, has a strong enough non-COVID line-up, and has a strong enough pipeline to remain competitive. CEO Robert Ford spoke of momentum across the firm's non-COVID business lines on Tuesday.

The firm pays shareholders just $1.80 annually to stick around. The 1.7% yield is nothing to sneeze at, but does not provoke investment. My purchase last night was small, trade sized, not investment sized. 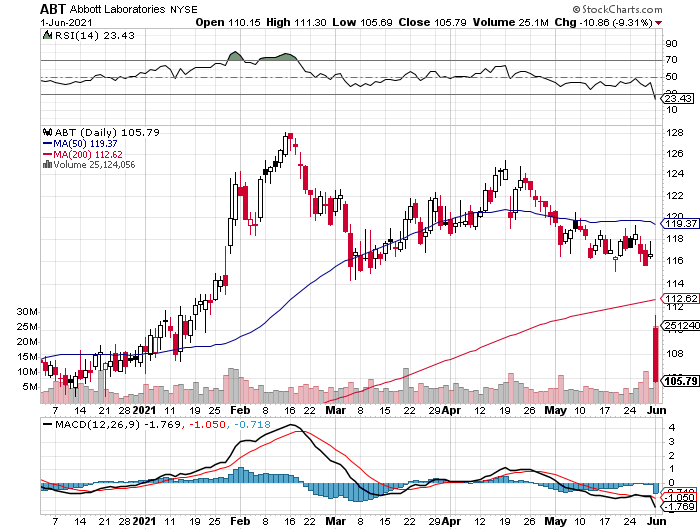 My thinking is that there will likely be in coming days an attempt to fill the gap created on Tuesday that if unsuccessful at least threatens to retake the 200 day SMA at $112. We'll have to see what happens over the rest of the week. Safe to say that at least some portfolio managers took action when the shares opened below that red line yesterday. I do not foresee an add at this level. I would need prices below par ($100) to go there.

Get an email alert each time I write an article for Real Money. Click the "+Follow" next to my byline to this article.
TAGS: Economic Data | Economy | Investing | Markets | Stocks | Technical Analysis | Trading | Manufacturing