I might be the one kid in the neighborhood where I was raised that never smoked pot growing up. I smoked cigarettes as a sophomore in high school, but had what I considered to be a lousy hockey season that year. Whether that was due to my new vice, or simply my own lack of skill, I chose to blame the Marlboro Man, and that was the end of that. I never smoked beyond the age of 15, and I did play organized hockey until I was 38. That was when finally, there was nothing I could do to keep my shoulders in their sockets, or my ribs from cracking when skating against teenagers, and twenty-somethings.

So, you might think that a guy like me would be the wrong guy to write an article about the potential of the cannabis trade. You'd be wrong. I like making money as much as the next guy. Sometimes, I'm even good at it.

On Monday, recreational use of marijuana will be legal in the state of California. California will be the eighth state to legalize such use, and in July, Massachusetts is expected to become the ninth. This past autumn, the Maine state legislature actually passed such a bill, but that failed due to Gov. Paul LePage's veto. The two sides are working toward resolving their differences so that a new bill might be introduced that would make Maine the tenth such state.

Twenty-nine states plus the District of Columbia now have laws that at least legalize cannabis for medical purposes. As someone who has witnessed the suffering of those what might find relief, I honestly feel that the refusal of the legalization of medical pot is simply unethical. That comes from one of the most conservative guys you known

Back to California, easily our most populous state. Legalized recreational pot use in that state is estimated to possibly generate as much as $5 billion worth of revenue a year. The state itself should see tax revenues increase by about $1 billion based on that alone. Small potatoes? Maybe in some circles, but money is money... and the trend is clear.

How to Play This Game

This is not an easy space to benefit from. Danger lurks everywhere. Plenty of names that you probably never heard of, not to mention, murky fundamentals. On top of that, many of these firms, which tend to be smaller in nature, are unable to write off business expenses on their federal taxes, as the use of marijuana is still illegal at the federal level.

Nevertheless, let's take a look at a few stocks in the space that you might actually have heard of.

This one is the most obvious. Scotts Miracle-Gro (SMG) is the name everyone thinks of when they think of the pot trade thanks to its 2015 acquisition of General Hydroponics. Scotts, known for turning our lawns green, has been actively acquiring businesses such as this that specialize in things like creating conditions conducive to growing the marijuana plant.

The company's annual revenue for the past 12 months is about $2.6 billion. About a tenth of that comes from their hydroponics business. That should grow, especially now, one would think.

Growth in the space is necessary, because SMG has more debt than I would like to see. The firm's total debt is roughly $1.4 billion. Cash and cash equivalents on hand come to about $121 million. The current ratio is a healthy looking 1.68, but the quick ratio comes to just 0.75 once inventories are stripped out. Is that problematic? Not necessarily, but it does not exactly inspire confidence either.

The stock spiked into year-end 2017 based on the California news as much as the obvious trend. Take a look. 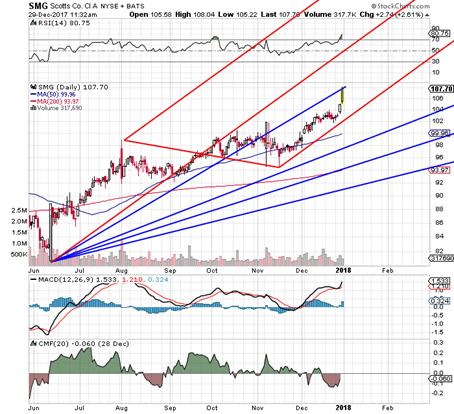 Interestingly, the stock has soared, even as money flow, quite simply, is just not there. This is speculative buying, but possibly for a well-thought-out reason. The stock is overbought, and a buyer might be smart to wait for a pullback. I would not trust the recent action for the MACD (moving average convergence divergence) based on the severity of the price action into Jan. 1.

The Fibonacci Fan (blue) suggests where support might be found should the trend remain intact over the next two months. The Pitchfork (red) suggests resistance down the road will be much, much higher. I would expect the share price to have difficulty respecting this Pitchfork model without at least one solid quarter that shows improved revenue based on the marijuana trade.

Would I buy the shares? I would not, but if my heart was set on it, I would wait for something around $104, and set a stop loss at the $99 level. If that's you, don't forget to leg in. I don't like buying anything all at once.

Kush Bottles (KSHB) was brought to my attention just yesterday by TheStreet's own Kinsey Grant. She went over the fundamental business line for this over-the-counter, micro-cap firm that provides and distributes everything ancillary to the pot trade without actually touching the plant itself.

Though the firm is small, and has turned over just $18.8 million in revenue for the past 12 months, Kinsey points out in her article that the business operates on the Oracle (ORCL) cloud. I thought that to be rather advanced for such a small firm, being that the cloud only has a roughly 10% level of business penetration in this country. This lends itself to the idea that this business can grow with overall growth in this industry. That's positive.

Unlike most micro-caps, Kush Bottles is not buried in debt. In fact, the firm has $916,000 in cash on hand as opposed to just $724,000 in debt. The firm appears to be easily able to meet short-term obligations, but still runs negative balances for both operating cash flow, and levered cash flow. The stock rallied into year-end, and I consider it to be rather attractive. Let's investigate the chart. 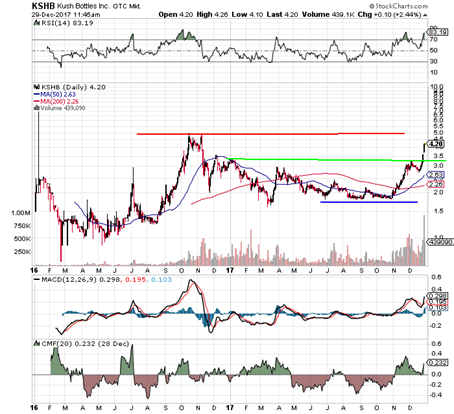 I have used a two-year chart here, because it covers the entire history of the company. Let's put this out there. The stock has spiked. It's a speculative play. All-time resistance is at $5. That spot was tested twice in late 2016. If the stock does continue its run, the algos will see that. The stock did experience a "golden cross" in early December. First line support should come in around $3.25 once the California dreamin' is out of the name.

What do I think? Heck, I co-run TheStreet's Stocks Under $10 portfolio. I kind of like this name's chances. It may even end up in our Bullpen one of these days. I would not chase this, but on a dip it's a definite "maybe."

I have one more for you. Corbus Pharmaceuticals (CRBP) has nothing to do with recreational marijuana use. This is strictly related to medical use. Corbus is another money-losing small cap. This company's fortunes are dependent upon one candidate that will either lead this name to victory, or cause it to fail. The drug in question is Anabasum.

Anabasum, once known as Resunab is a cannabis-based drug that has been designed to treat sclerosis. The drug has shown some potential in trials, and did well in data released from Phase 2 testing this past October. Remember, this is a one-trick pony. Still, I want to show you what is interesting about this chart. 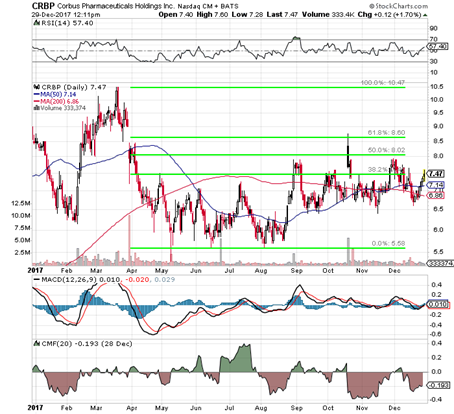 Money Flow is awful. So what? We already knew that. We'll have to take some liberties with this chart to try to validate it, but let's run a Fib model from the highs of March through the lows of May right through August. (We'll exclude that one day in early May because it looks like an outlier to me.) Here you can see that rallies failed at the 50% retracement mark twice, and the 61.8% retracement mark after that successful-looking trial in October.

Now, here's comes another attempt at the 50% mark, or in common speak -- the $8 level. A test there seems almost inevitable. There was a "golden cross" in November. The MACD has just experienced a bullish crossover that put the 12-day, and nine-day EMAs (exponential moving averages) in positive territory. On top of that, relative strength seems to be in good shape, and rising.

Know what? A break and hold at $8 should allow this name to approach $8.60. Positive news on the sclerosis drug, and this thing could go back to $10.50. Know what else? The firm announced last week initiation of Phase 2 studies for that very same drug for the treatment of lupus erythematosus. Hmm. This one might just be what we call an investment.