"The mind is not a vessel to be filled but a fire to be kindled." -- Plutarch

We have now spent a couple of days touching on the retail sector. Many of your favorite retailers did give Tuesday's gains back on Wednesday. Hopefully, you took a little off the top as I suggested (and did myself) in this space Wednesday morning. I still like the two "brick and mortar" names that I mentioned in that Recon note, but that is where "active" management comes in, so you don't take a kidney punch when the worm turns and the wind blows.

Taking another look at retail on Thursday, we'll focus more on e-commerce. We've already discussed the phenomenal 18.1% year-on-year growth seen for the holiday season in this growing slice of the business. The incredible thing is that Amazon (AMZN) is believed to have captured nearly 50% of all on-line sales. Walmart (WMT) , as I have been pounding the table for about a year now, is emerging as serious competition and may have seen nearly a 100% increase in its own holiday e-tail performance, according to GBH Insights. We all know that I'm sweet on Walmart. Back to why I trade around, but stay invested in Amazon.

It's really down to three items for me as an investor. The first is "Prime". Prime membership now stands at 88 million accounts. Prime members are believed to have spent about 22% more this holiday season over last year. By offering certain benefits to prime members, and to ease shipping costs -- more so for members than for non-Prime account holders -- Amazon has found a way to build a moat around its core customers and to instill in them a degree of loyalty that may or may not be in the best interest of the consumer at the end of the day. It does feel good now, though, doesn't it?

The second of these investable items would be Amazon Web Services, to include the company's cloud business, and the third would be the Alexa product line, which seems to be galloping ahead of the competition for home penetration. Clearly, putting a retailer in the home of an individual, or family group, also puts that retailer inside the head or mind of those dwelling there. Win their hearts and minds. Hmmm. Heard that one before.

Why else do you think the likes of Action Alerts PLUS charity portfolio holdings Alphabet (GOOGL) and Apple (AAPL) are chasing so hard in that space? And those two are not retailing giants, although Alphabet is teaming up with the already mentioned Walmart. By the way, I am not really favoring any one stock here. I find the whole development of this space fascinating from an intellectual perspective, and am currently long every stock named in these last few paragraphs. This development in the path of human behavior, though... Trusting? Lazy? I don't know. Amazing? Certainly.

One item that went by sort of quietly on Wednesday was the news that smart-beta funds have now surpassed the $1.0 trillion mark in terms of assets held. I will never tire of learning of the development of the needs and wants of human beings, as well as the creative ways that markets simultaneously develop to meet them. It is this that makes us great.

As the investing universe seems to lean further and further toward passive investing and away from active management, a sort of hybrid investment vehicle would start attracting attention. In fact, year to date, this kind of vehicle has seen new investment of $69 billion, according to ETFGI, representing year-over-year growth of more than 30%. That would be the fastest growth rate since the global financial crisis.

What is a "smart-beta" fund? Some of you might know them as "strategic beta". Usually an ETF. What they try to do is juice a passive strategy through the modification of certain factors. Those factors can be financial in nature, or maybe political or social. Let's say an individual wants to focus on a specific item or avoid some kind of investment that they disagree with on any level.

For example, such funds might track and index such as the S&P 500 but weight the individual stocks differently than does the index, so as to attempt to maximize performance. So, instead of weighting by, say, market capitalization, a fund might weight by revenue growth rate, or dividend growth. Maybe the fund avoids firms that profit from certain perceived vices.

These funds come with slightly higher fees than do passive funds, but still those funds are usually far lower than would be said funds attached to something actively managed. I think you need a certain amount of exposure across all mediums. While I certainly advocate active management, I like to be my own manager as much as possible. I would prefer my success, or lack thereof, to be the result of my own actions. That said, I see not only a place for, but a need to "line" one's book with passive benchmark type funds, and a place for hybrid vehicles such as this to add increased direction to a portfolio based on current macro, and/or one's own gut instinct.

Copper rises for a 15th consecutive trading session; 15, gang !! Gold pushes up against $1300. Silver threatens the $17 level. Obviously, it's not just dollar weakness. That's a factor, but for copper, this is also a Chinese demand story. Copper now trades at the highest levels seen in three years. Hooray for Freeport McMoRan (FCX) . Anyone else notice the Dow Jones Aluminum Index break through resistance that had been in place since 2009?

If you read me, then you know that I'm an energy bug at heart. Loving the recent action in the oil patch? Yes, I am. Natty Gas? Don't get me started, though, it is cold outside, and finally that commodity is off the mat.

It's oil services that I have been focusing on of late. I have long touted and traded (unsuccessfully all year until December) Schlumberger (SLB) , as I have felt that this is the best in class firm in the space, and that the stock would do well, when markets turned for the better. Well, markets have seemingly turned for the better. WTI Crude seems to have found footing above that crucial $58 level. A quarterback sack of the $60 level is where the next hurdle lies. Tax reform is obviously good for the sector, and especially good for SLB as the firm currently has an effective tax rate above 41%.

The fact that Saudi Arabia is shopping around the Permian to possibly increase Saudi Aramco's exposure to U.S. shale prior to any possible public offering is only a good thing for companies like this, and that would include Halliburton (HAL) . SLB is currently trading at 31 times next year's projected earnings. HAL might just be the value stock in the space, and sports a forward-looking PE ratio of just 22 to show it. Cheaper dollar, OPEC re-balancing ... Is it too late to get involved if you are not already there? Do I still prefer SLB? Let's take a look.

Charts of the Day (SLB vs. HAL)

What I have tried to do here is make an apples-to-apples comparison for oil services giants Schlumberger (SLB) and Halliburton (HAL) . To do so, I have placed both stocks on a 13-month daily chart so as to catch recent extremes in market pricing. While both stocks seem to be breaking out with their group in response to higher crude prices and more favorable tax treatment, there are stark differences.

Let's take a look at the Fibonacci models that begin with the highs of late 2016 and run through the lows seen this year. For one, HAL bottoms out in August, SLB not until November. HAL has also broken through a 38.2% retracement with some violence, and is threatening to reach the 61.8% level. As for SLB, it is earlier in its recovery, and has not yet hit a 38.2% move. Expect some resistance there.

Both firms saw their daily moving average convergence divergence (MACD) turn bullish in late November. Again, though, when taking a look at money flow, HAL is further along in its recovery than SLB, and is actually starting to show some green. That has led to relative strength that indicates an overbought condition. SLB is not quite there yet.

My conclusion is that should WTI Crude take and hold the $60 level, both of these stocks should do well. My preference remains SLB, which I am already long, because I believe it to be well behind HAL technically, and could still realize similar movement. Both the Fibonacci levels and the Pitchfork suggest that HAL is likely to hit some resistance at $50. A break there allows a move into the high $50s. Failure, and you are looking for support around $45. 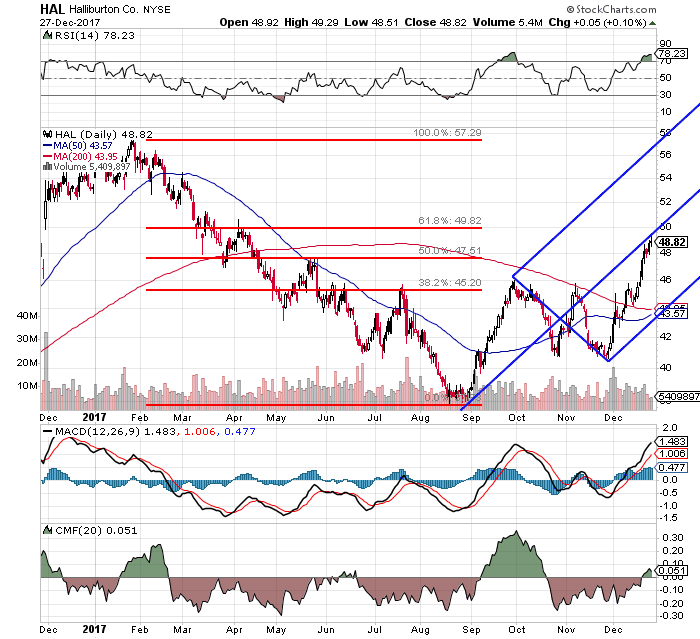 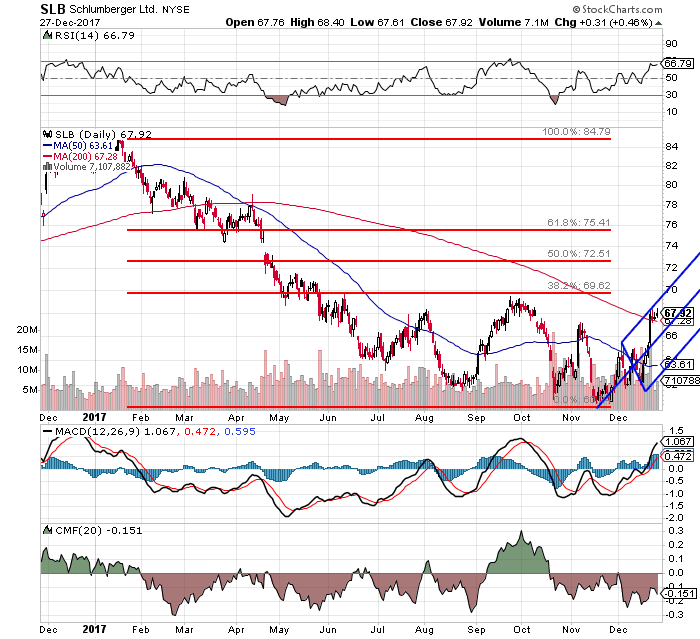 SLB is going to be tested at the $70 level. At that spot, the nature of the Pitchfork would have to be adjusted, but a move of another $5 to $6 to the upside would not be crazy. Support here upon failure would likely be found above $64. Winner, winner... chicken dinner.

Get an email alert each time I write an article for Real Money. Click the "+Follow" next to my byline to this article.
TAGS: Investing | U.S. Equity | Energy | Consumer Discretionary | Markets | How-to | Oil Equipment/Services | E-Commerce | Risk Management | Stocks