"The curious task of economics is to demonstrate to men how little they really know about what they imagine they can design." -- Friedrich August von Hayek

You all know that President Trump signed that $1.5 trillion tax cut into law last week. You all know that Congress is working on increasing government spending in 2018. Disaster relief. Infrastructure build. Defense. All costly. All to add to the deficit at a time that federal revenues, thanks to the already mentioned tax cuts, will likely sag. That is unless those cuts provoke enough increased growth to be worthwhile.

Call it late-cycle stimulus. Call it whatever you want, but this is certainly a different approach from the fiscal side than we have ever seen before, particularly in an economy that is growing and appears to, at least of late, have picked up increased momentum.

The first move in Congress will be to remove spending caps that have been in place since 2011. How much help will all of this stimulus provide? Most economists seem to agree that there will be a small boost, but to "their models" for 2018, which still seem to languish in the low to mid 2% range, not to the annualized 3%-plus type growth that the U.S. economy has enjoyed since the first quarter of 2017. Most economists also seem to expect the growth to tail off after 2018, while simultaneous growth in the budgetary deficit does not let up.

Will this leave the government in a bind at some later point? Unable to react to a crisis? Unable to borrow? Just be cognizant of what goes on here. Wall Street economists as a group, when painted broadly are often wrong, sometimes wildly so. While I often preach living within the environment provided, and trying to excel within that environment, I also preach diversification. Part of diversification, in my opinion, is the holding of some physical gold. Barbaric relic? Sure. Still, the original alternative currency has been used as a store of wealth (not to mention as a medium of exchange) for 5,000 years plus.

Bitcoin has recovered over the long holiday weekend. The leading cryptocurrency has regained levels above $15,000. I cannot knock the lofty levels that bitcoin trades at. Obviously, a lot of folks feel that this product is worthy of a large chunk of their fiat cash. It's your money. Do with it what you think proper. I just know that on the day that the lights go out, and don't come back on for a while, that on that day, I'd rather have physical gold than bitcoin. Just might buy your kid a rusty can of beans.

Will the markets experience the famous "Santa Claus Rally" this year? Has tax reform already stolen that thunder? What is known to traders as the Santa Claus Rally generally is a post-Christmas phenomenon that encompasses the final week of trading in U.S. equity markets plus the first two business days of January as new money finds its way into the marketplace. After that though, markets are on their own, and sometimes mid-January can get a little rough.

This late December move usually does work, and you can often score gains of more than a percent this week into next. I just have to wonder, though, with the Dow Jones Industrial Average already up more than 5% in December, and with the S&P 500 up more than 3%, just how much juice the euphoria over corporate tax relief might have brought forward?

You might have thought that tech stocks could run here. After all, the Nasdaq Composite is only up roughly 1% over the past month, it's just that this index is the leader for the year, up nearly 30%, so this highly publicized rotation that we have seen does make perfect sense.

What am I going to do? I will play this market as if we will see old Saint Nick this week, but I will also probably pull in my panic points, or stop loss orders a little tighter on my less confident names. The names that I have my highest levels of confidence in, I will let run, unless they should show weakness. Then I am more likely to add. Should tech show weakness, that for me would be names like Intel (INTC) , and Microsoft (MSFT) (an Action Alerts PLUS holding).

Algorithmic trading is being blamed for a selloff of 3% for the euro versus the U.S. dollar late on Christmas Day, and the subsequent recovery. One euro is once again worth more than $1.185, as if nothing ever happened.

Holiday retail sales are looking pretty solid according to Mastercard (MA) . E-commerce was particularly strong this year, increasing by a reported 18.1% year over year. How much market-share in that arena was captured by the current champion, Amazon (AMZN) ? How much were the likes of Walmart (WMT) , and or Target (TGT) able to capture remains to be seen, but will be of key interest at least to this guy. Overall, retail sales for the season showed year- over-year growth of 4.9%.

At the time of print, bitcoin was trading at a last sale of $15,088, up 9% on the day, and apparently surviving last week's harsh selloff. This was key, as this was the first real test for the cryptocurrency since futures trading began in Chicago, and since the sale price went parabolic in mid-November.

Chart of the Day: Relative Performance vs. S&P 500 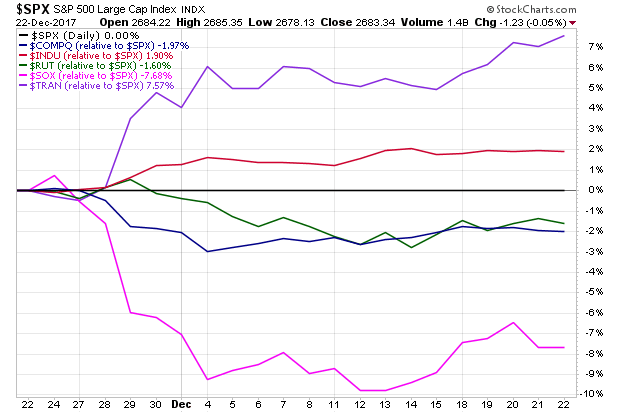 Over the past month, using the S&P 500 as a constant, the performance of our other widely used indices versus what I consider the benchmark for U.S. equities is varied to an almost startling degree, and truly illustrates the rotation that we have seen.

Industrials vs. Tech? Growth vs. Value? I think the most illustrative comparison here is the performance of the Transports vs. the Semiconductors using the S&P 500 as the base. This tells more of a story than simply saying "Industrials vs. Tech".