This commentary originally appeared on Real Money Pro at 9:00 a.m. on Dec. 23. Click here to learn about this dynamic market information service for active traders.

Retail stocks have had a great run since the U.S. Presidential Election. The S&P Retail SPDR (XRT) , an ETF that acts as a bellwether for the sector, jumped by nearly 20% in the month following the election.

However, just two weeks after XRT reached a multi-year high, it is breaking down. Worse, the damage is being felt across the retail spectrum.

First we'll look at XRT. The retail ETF has broken down from a bearish head and shoulders pattern (L-H-R). It has also received a sell signal (shaded yellow) from its MACD (moving average convergence divergence) indicator, which has formed a double top.

All is not lost for XRT, as it is still trading above its 50-day (blue) and 200-day (red) moving averages. These indicators should provide support in the near term. 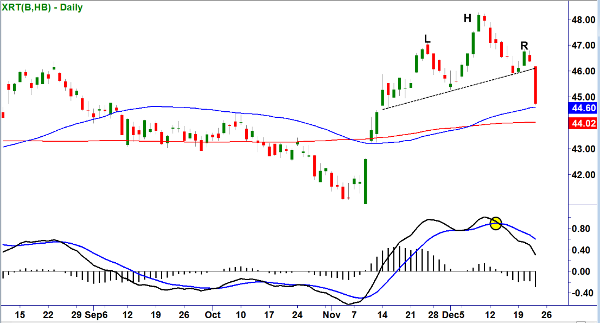 Which portion of the retail sector is responsible for this breakdown? Damage at the high end is evident in Coach (COH) , which yesterday lost nearly 4% to close at its lowest point in nearly a year.

Coach's chart shows bearish double tops in both its stock (semicircles) and its MACD indicator. The chart also features a nasty bear flag breakdown (shaded yellow), which projects further losses to about $32. 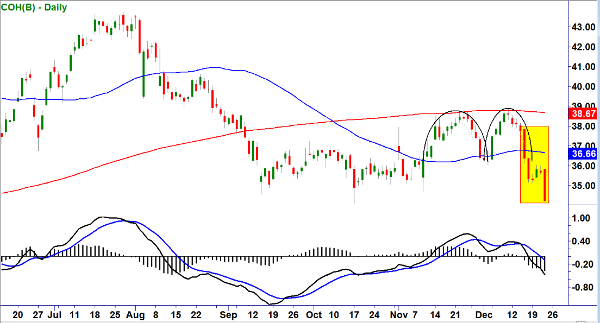 However, the damage on the low end is just as severe. For example, Dollar Tree (DLTR) closed at its lowest price in over a month, losing 5.65% in one day. This comes on the heels of a 17% gain in November. The stock fell on nearly double its average volume, an indication that sellers are serious. 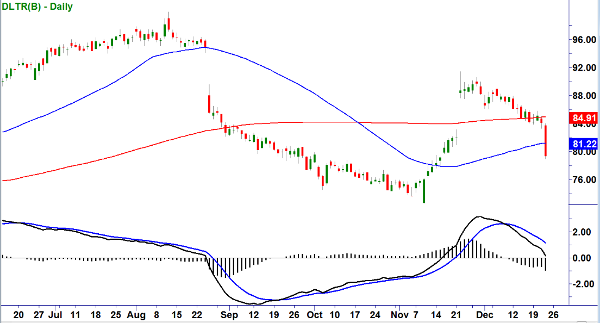 What is going on here? The likely culprit is the appointment of Peter Navarro, a University of California Irvine professor, as a trade policy advisor to the Trump administration.

Navarro authored a book titled "Death by China", which is highly critical of that country's trade practices. His appointment was accompanied by reports suggesting that Trump's economic team is considering a 5% to 10% tariff on all imported goods.

It's been said that nobody wins a trade war, but it's entirely possible that we're about to witness some gamesmanship. I think it's unlikely that such a tariff would ever be implemented. However, since the U.S. runs a trade deficit while China runs a surplus, it would seem that China has more to lose.

If the retailers continue to slide, I'll do some bargain hunting of my own. For example, Tiffany (TIF) reached a one-year high earlier this month, and has now fallen back to its 50-day moving average (blue). If that moving average holds, I'll pick up shares of this high-end retailer at a discount. 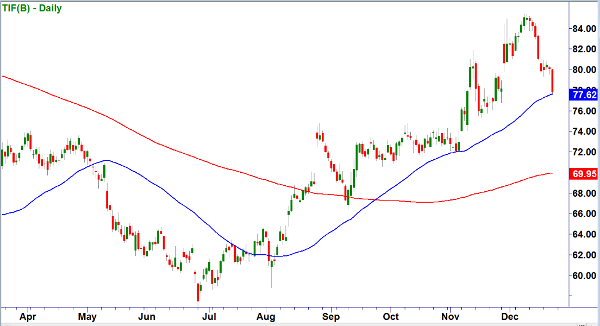 Get an email alert each time I write an article for Real Money. Click the "+Follow" next to my byline to this article.
TAGS: Investing | U.S. Equity | Consumer Discretionary | Technology | Stocks