"'Elf' has become this big holiday movie, and I remember running around the streets of New York in tights saying, 'This could be the last movie I ever make." -- Will Ferrell

Volatility. That's what. If you have been following the Bitcoin story, or the broader crypto-currency story, only recently, you might have thought that these "assets" only went up in value. Well, Bitcoin is at this dark hour of the morning trading above $13,800. Down 12% from Thursday, you say? Up 10% from the low, I say. Mr. Toad's Wild Ride. At one point overnight, the most famous of all digital currencies had lost about a fourth of its value versus the U.S. dollar.

The beat-down was widespread. Ether, Litecoin, and Bitcoin Cash were all significantly lower. In fact, on my tracker screen for crypto-currencies, 24 of the 25 tracked are lower than they were 24 hours ago, and the one that is actually higher in value, I have never heard of, and has not yet traded on the day.

Over the last two weeks, Bitcoin futures contracts have started trading on both the Cboe, and the CME. Both contract types appear to be pricing in lower prices for Bitcoin going forward at this time. Perhaps the broader access to exposure that futures trading allows for the masses has done precisely what it was expected to do, which was to alleviate the condition of scarcity for the underlying commodity. Over the last few days, several broker-dealers have made trading these contracts available to their clients. That should further extend the normalization process toward the crypto-crowd, despite elevated margin demands.

What caused last night's panic, though? Security concerns regarding Korean markets? Maybe. Perhaps this was simply the case of a wide stampede toward a small doorway. It does appear, at this time, that the selloff has attracted buy side. In the meantime, it would seem that adding the word "Bitcoin" or "blockchain" to the name of a struggling firm is now a popular business strategy. It would seem.

Back in the day, I used to trade "P-Gas" -- PG&E Corporation -- professionally. Easy stock to trade. Usually stayed in a range. Paid a nice dividend. No matter what you caught on one side, you could find the other side. Big trades. Double billing. There was always customer interest if you had the axe, or if you knew who did.

Gang, there was an axe in the name yesterday, but nobody was running a trading crowd. It was the company itself that suspended the dividend. The stock bottomed out below $42 a share after trading around $52.50 on Wednesday, and in the high 60's back in October. A bargain? Easy money? Not so fast.

The potential for legal liability for the October wildfires in Northern California is unknown. We do know two things. Insurance claims for property losses due to those fires are up to $9.4 billion, and funds mandated to invest in dividend-type stocks would now be forced to sell the shares.

Your old pal likes to get involved when a stock gets crazy, sometimes; when he understands the playing field. That said, your buddy is no Evel Knievel. Always willing to put two heads together, your pal, Sarge got on the horn with the smartest man he knows -- the Colonel. The Colonel has been through it all. He asked his son if he was thinking of getting involved. His son hesitated, then was clear: "No way". Too much baggage here to spend actual money on equity.

Now, the Colonel is more of an options guy than an equity guy. Your pal asked his dad: "You getting involved?" Hmm. "I don't know. You can still get a January 19 $45 straddle for a rough five bucks... taking a directional shot might just be foolish at this point." Enough said. The phone call ended. No need to risk a good year being speculative on Dec. 21. No need at all. What looks like easy money might just be fools' gold.

There would be no Evel Knievels among us this day. News broke last night that Moody's had put the firm on review for a downgrade. You know, PCG may or may not be oversold, but Evel Knievel was really, really cool.

That $58 level for WTI Crude is no joke. That is the spot that I have told you about repeatedly for so long, and it is so true. The commodity can pierce this spot, but we'll never move on form here unless we see support right here on a severe test from above. That chance comes this morning. Energy names have obviously received a boost from the recently passed tax bill that lowers the headline corporate tax rate from 35% to 21%.

For those still wondering, over the past five years, the energy sector has broadly suffered effective tax rates right around 35%, and long-time Sarge faves Schlumberger (SLB) , and Apache (APA) -- which are also holdings of the Action Alerts PLUS portfolio, which Cramer co-manages as a charitable trust -- were both among yesterday's leaders to the upside. Schlumberger, obviously, for the relief that name will experience next year coming off of a bombastic 41% effective tax rate, but why Apache?

APA is far more dependent upon natural gas than some other energy type names due to its Alpine High holdings, and natural gas has been severely beaten with the ugly stick. Could it be the rumors spreading around trading desks that Saudi Aramco has been shopping around for assets in the Permian, like a Wall Street Journal story suggested earlier this week? Hmm. That's very interesting. Has the worm turned on the giant? Either way, those who do own large properties in the basin could see a nice, even if speculative, pop here. Huzzah.

Chart of the Day: PG&E Corp. Meets the "Ugly Stick"

I will add no pricing models to the chart of PG&E Corp. (PCG) at this time. I just want you to take notice of what news events can do to performance and why, in my opinion, it is often best to avoid a name until you know the news is all out and the market has absorbed that news, even if sometimes that means giving up some potential gain. Impulsive behavior is counter-disciplinary, and I think will hurt a trader more often than not.

You can see here incredibly weak relative strength, and an ugly moving average convergence divergence MACD. There was indeed some positive money flow at Thursday's lows. Still, that "death cross" that the name experienced as October turned into November still looms large. There is nothing on this chart suggesting anything positive just yet. One last thing -- check out the volume bars. Much higher on the selloffs. Much smaller on the few up days that we've seen. Very telling on sentiment. 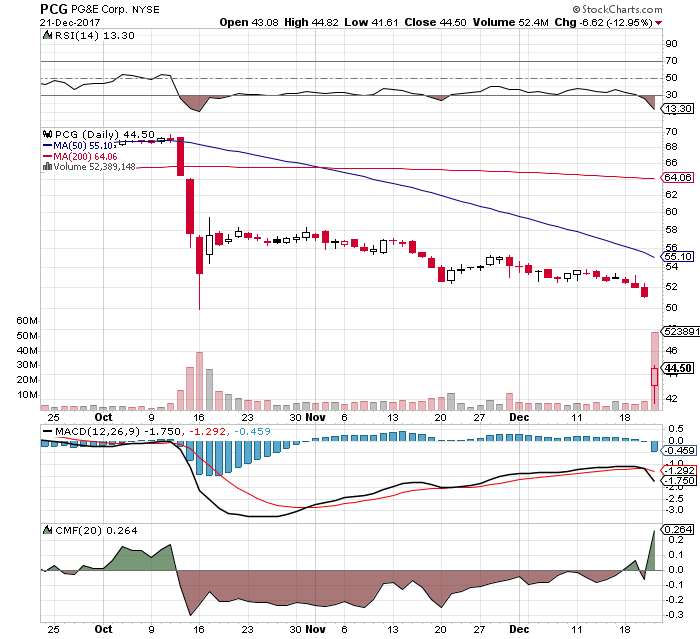 Get an email alert each time I write an article for Real Money. Click the "+Follow" next to my byline to this article.
TAGS: Investing | U.S. Equity | Cryptocurrency | Energy | Markets | FOREX | How-to | Options | Risk Management | Stocks

Adani Delivers Tome in Response to Short-Sale 'Attack on India'

As the founder slips down the rich list, the Adani Group says Hindenburg Research report is an attack on the very nation of India.