Looking at Eric Jhonsa's latest forecast for technology companies and trends for 2017, I culled out the best looking stocks for each of the 10 predictions.

The first of Eric's forecasts is that he anticipates that a new regulatory regime under the Trump Administration will be more M&A-friendly. Everyone has their list of possible takeover candidates, but looking over a number of tech names I found that Applied Materials (AMAT) , KLA-Tencor (KLAC) and Yelp (YELP) looked the "most interesting" on the charts. I have no knowledge that there could be discussions in some boardroom somewhere, but I do see a pattern of accumulation on these three names. Let's look closer.

In this 10-year weekly bar chart of AMAT, above, we can see the 2008 decline followed by a four-year base pattern. Then we have an upside breakout in 2013 and a rally to early 2015. Prices correct in 2015 and climb to new highs this year, besting 2007 and 2015. Notice the movement of the On-Balance-Volume (OBV) line, which rises during much of that four-year base and turns up again in late 2015. This kind of accumulation seen through the OBV line is really impressive. 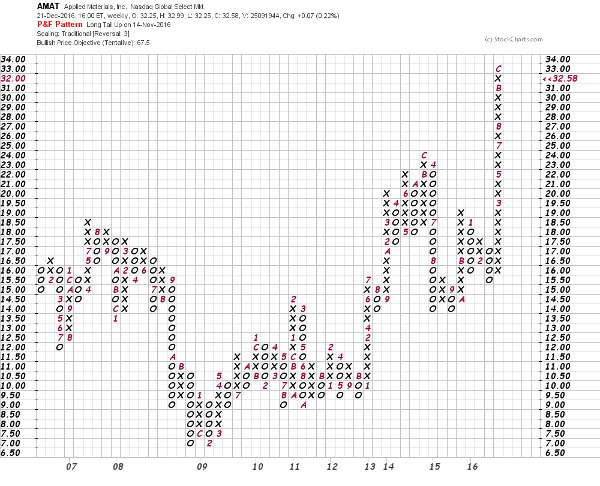 We have included this long-term Point and Figure chart of AMAT, above, to show the large base and the breakout. Even though prices have doubled in recent months, this chart yields a long-term potential price target of $67.50. Something to think about.

In this 10-year weekly bar chart of KLAC, above, we can see that the best time to go long KLAC was at the depressed levels of 2008 and 2009 when prices were in the teens. A six-year rally followed, with only normal corrections along the way. 2015 turned out to be another buying opportunity, and in 2017 we could be looking at new highs. What is very impressive is the steady rise of the OBV line. Even when prices declined sharply in 2015, the OBV line held steady. Investors like this stock. 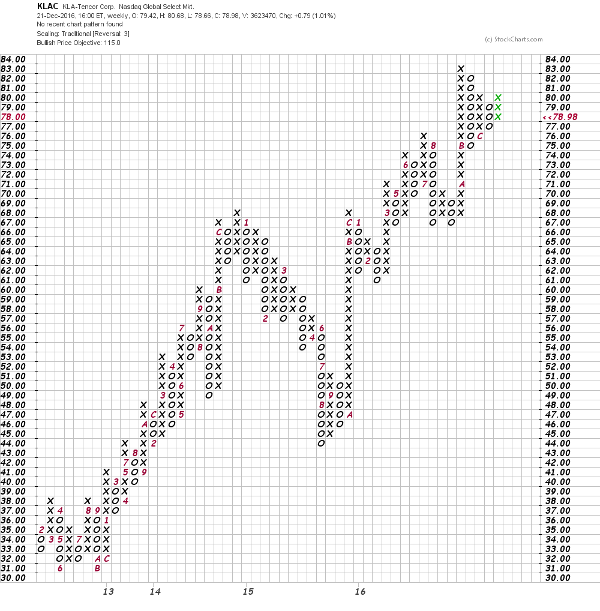 In this long-term Point and Figure chart of KLAC, above, we can see a recent consolidation pattern. A breakout to new highs could start KLAC on its way to an $115 price target.

In this weekly chart of YELP, above, we don't have as much price history to look at compared to AMAT and KLAC, but look closely at the strong rise of the OBV line in the past year. Investors with vision have been accumulating YELP. 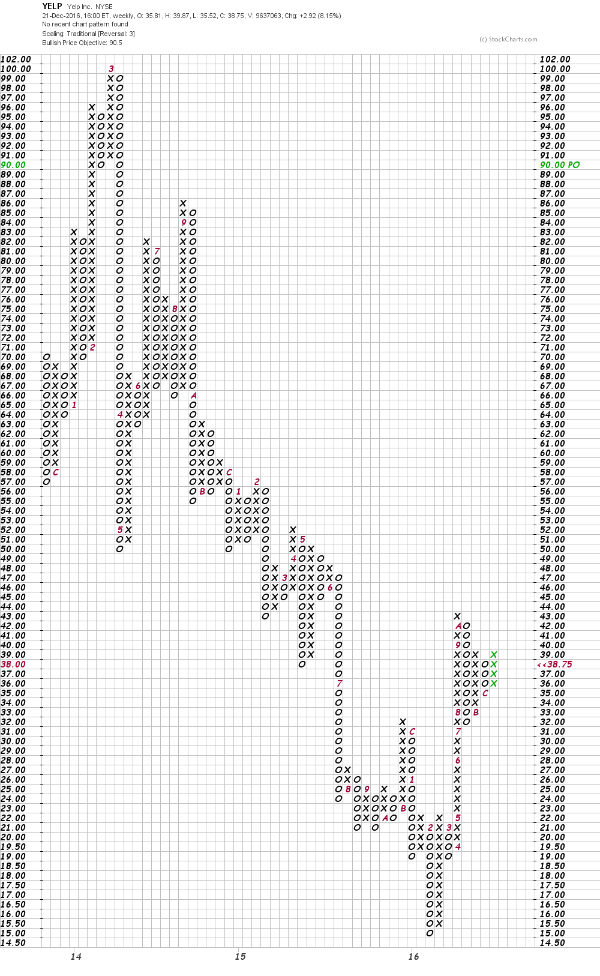 In this Point and Figure chart of YELP, above, we can see a very strong reversal of the longer-term downtrend. Prices look to be poised for an upside breakout and the long-term potential price target is well above the market.

Salesforce could see value both in how Slack is used to collaborate with co-workers and in how it's increasingly used to engage with customers.