"Getting information off the Internet is like taking a drink from a fire hydrant." -- Mitchell Kapor

Not signed? The House voted 224-201 on Wednesday in their do-over attempt to pass the GOP tax reform bill. The House and the Senate have now both passed the measure. All Democrats yesterday voted against this legislation; 12 Republicans did as well, mostly from high-tax "blue" states. One might say that these 12 put the best interest of their constituents above party loyalty. What then, would one say about Democrats from red states? Hmm. As for the signing of this bill by the president ... that could actually take a while.

The president is waiting on the outcome of budget talks as congress tries to maneuver their way around automatic spending cuts that would be triggered by the tax cuts, and do so while avoiding a government shutdown. The expectation is that the president will sign this bill on or around Jan. 3; by holding off until then he will protect programs that people depend on, such as Medicare and Medicaid.

Currently, the sands of the hourglass are running low. The House of Representatives worked into the evening on Wednesday, putting together plans to keep the government up and running past the Friday night deadline. Obviously, they would like to put off the big budgetary fight into 2018, and not take the political luster off their recent legislative victory.

I see the rotation. I will trade the rotation when I see opportunity. I recognize that the tech sector stands to gain, perhaps, the least when compared to other sectors, in response to the passage of this tax reform bill. That said, tech has been a top performer for a long time. You can go back a year, three years, even five or 10 years. Tech is almost always in first or second place in terms of sector performance. There's a good reason for that.

Every business is, to some degree, a technology business in 2017, or at least it depends upon technological support in some way. The high-fliers will likely see a few hiccups as energy names, financials, transports, industrials, and even some retailers see some inflows. That's an overall positive for the marketplace, and nothing says that you can't reinforce the time-honored discipline of diversification by investing across these platforms. I have no position in Micron Technology (MU) , but Micron's first-quarter earnings released on Tuesday evening told us a tale worth understanding.

Micron's quarterly EPS screamed to $2.45 on revenue of $6.8 billion. Both up huge year over year, both beat expectations. Micron also projected a sequential gain for the second quarter. What does that mean? Well, at least to this guy, that means despite the contraction seen across the semiconductor space over the past month, pricing is not in the rough shape that some analysts apparently thought it was.

Many across the industry have conveyed their belief that NAND Flash memory prices were past peak. Those same folks have also said that DRAM pricing was headed the same way. If true, this could indeed be where the semis headed into the bust part of their well-worn boom-bust cycle. These chips are used in smart phones, PCs, autos (self-driving, as well as human-driven), crypto-currency mining, and the cloud ... yes, the mighty cloud. Guess what, gang? the cloud ain't goin' anywhere.

Refresher -- For those wondering, but afraid to ask.

DRAM is 1,000 times faster than NAND. DRAM is more durable. DRAM is cheaper.

Now, About the Cloud

As pointed out by Jim Cramer in one of his columns several weeks ago, cloud penetration is only about 10% right now across American business. Globally, the cloud is still insignificant. Chinese penetration is running in second place on this planet, and there, the number is only about 3%. Think Chinese business is still growing? Me too. Think American business is in a good spot? Me too. Think European, Japanese, and Korean businesses are going to have to find storage and software solutions going forward? See where I'm going? We're not going back to floppy disks, kids. I like pencil and paper myself, but I'm not going to invest in notebooks.

There are three kinds of services sold by the main players in the cloud space. There's Infrastructure as a service (IaaS), there's Platform as a Service (PaaS), and then there is Software as a Service (SaaS). The data can be broken down in several ways. Leaving out software, Amazon (AMZN) would appear to be the dominant player in the space, with a 51% share of the market. However, including software services, it is Action Alerts PLUS charity portfolio holding Microsoft (MSFT) that comes out on top by a plurality, and with a higher growth rate than AMZN. Remember my December trading note. I let you know at that time that I was dissatisfied with my long position in Oracle (ORCL) , which had been my cloud play.

It was at that point that I started migrating my allocation in this space toward Microsoft. I remain long both, but put a few more marbles in a few more holes. I also believe that while some of these stocks trade at discount prices, maybe it's a chance to leg in. I said leg in, don't just buy and pray. The money will still be there to be made for these businesses. For American firms, the new tax plan allows for offshore earnings to come home un-penalized.

Alibaba (BABA) is also a player here, with only a rough 3% market share. Hmm, wasn't China's cloud penetration running at about 3%? Not significant, huh? What if I told you that BABA's revenue along this business line was experiencing a rough year-over-year growth rate of 92%? Hmm. Yeah, you can trade these names, but I think you still need to be invested in the cloud, and in semiconductors.

If we're wrong, make sure you have some clean water and canned food in the garage.

A six-month daily chart of Microsoft is telling. At least, I think so. Take a look at declining Relative Strength, a suddenly softer moving average convergence divergence (MACD), and the money flow heading toward the Mendoza line. Negative, right? Hold on, cowboy. I see something else.

Now, let's take a look at the Pitchfork. You can now see that the euphoric late October earnings pop was unsustainable. You can also easily see that the channel providing a range between the lower and central trend lines is very much intact. Not only that, but the lower trend line is supported by the 50-day simple moving average (SMA). Know what, gang? The algorithms and the simpletons who write them see this, too. I could be wrong. Maybe I'm the simpleton, but I bet we see support right there. 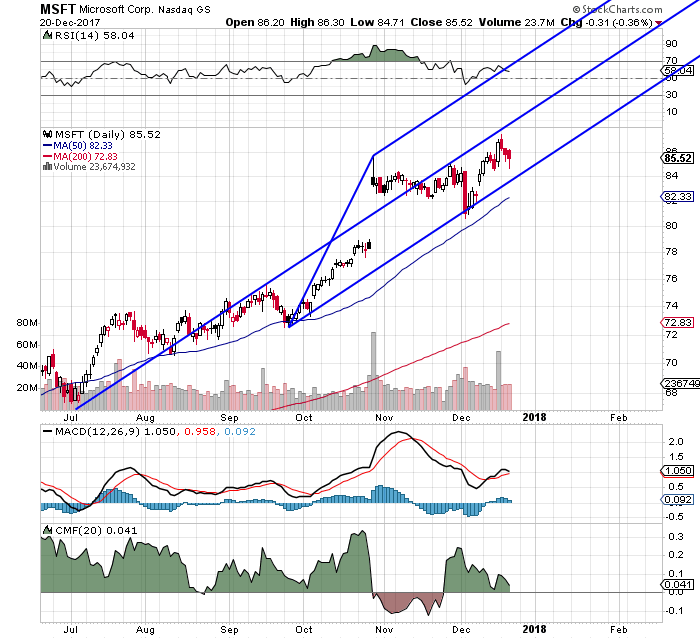 Is every firm across the space currently investable? Easy question. No easy answers. I have already told you that I was not thrilled with my decision to invest in ORCL a while back. Not that it cost me anything, but there will be no parades scheduled based on that investment either.

Now, let's take a look at Salesforce.com (CRM) . No doubt, trading at a discount. Should we dive in? I wish you hadn't asked me that. What I see here is declining relative strength, eroding money flow, and a recently failed attempt at a bullish cross-over for the MACD. Positive? Like what we see with MSFT, there does seem to be support at the 50-day SMA. 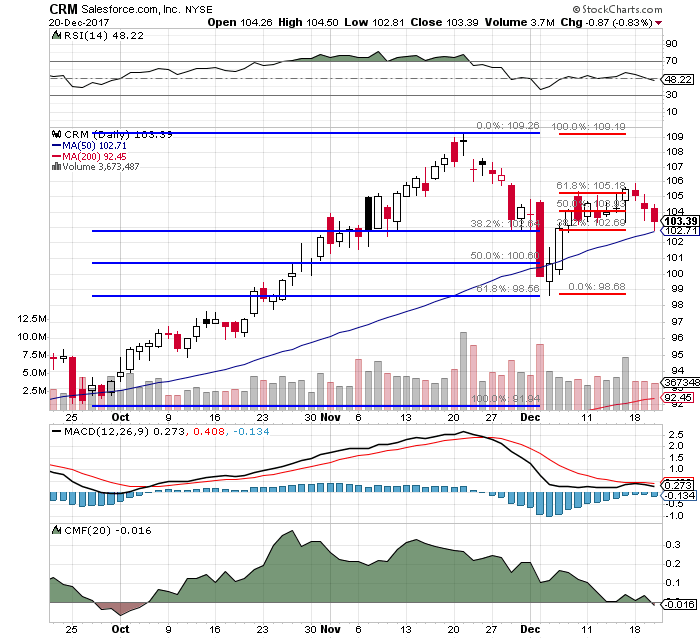 That tells me that CRM is possibly developing a narrowing trading range, smart kids might call that a pennant. Pennants typically run a few weeks, and end violently. I am just not yet sure which way the violence will run.

Get an email alert each time I write an article for Real Money. Click the "+Follow" next to my byline to this article.
TAGS: Investing | U.S. Equity | Financial Services | Technology | Markets | How-to | Politics | Risk Management | Stocks