"Nobody gets to live life backward. Look ahead, that is where your future lies." --Ann Landers

When you were a kid, you likely played the game Simon Says. I don't know if everyone did, but if you were an eight year old street urchin growing up in the boroughs of New York City in the early 1970s, you did. The premise of the game was simple. Follow instructions correctly, or you had to start over. You could only follow these instructions if "Simon" said. Without that say so, whatever you were told to do was to be ignored. If you proceeded without Simon's say so, you felt kind of stupid. Maybe that's how the GOP leaders in the U.S. House of Representatives feel this morning.

Earlier this morning, The U.S. Senate passed the Republican tax reform bill by a vote of 51-48. The one abstention was Arizona's John McCain, who was unable to attend the vote due to health reasons. The House of Representatives was thought to have passed this same bill on Tuesday by a count of 227-203. Once the House was thought to have passed the bill, and it was sent to the Senate, the Senate parliamentarian found provisions within the bill that broke budget rules. These are not considered to be material in nature to the bill, and were stripped out. However, now the House must re-vote on the "newer" version of this bill today. Somewhat embarrassing, I would think, but much like the children's game... nobody will care about how the game was played once the game is over.

Easy. The bill, once passed by both legislative bodies, heads to the President's desk where it will most likely be signed into law. This could happen as soon as this week. And what happens to our money? Well, let's dig in, gang.

I will not get into the individual side here, as I live in a highly taxed blue state, which definitely impacts how one looks at this bill. From a corporate perspective, the bill is pretty close to a home run. This bill cuts the headline corporate tax rate from 35% all the way down to a much more competitive 21%. This will be the driver for higher earnings expectations going forward. Then there's the immediate expensing for business investment. That should provoke increased capital spending. However, new rules will also limit the ability to write off interest paid. That will counter the increase in capital spending, at least among the economy's more debt-laden firms, particularly if interest rates continue to rise.

On top of this, U.S. corporations with international businesses will have the opportunity to repatriate cash stockpiled abroad at 15.5% (I was hoping for something closer to 10%). A real positive as these businesses move forward (more so than the repatriation, though that could pull forward repurchase programs and dividend payments), will be that many will face no U.S. taxes on foreign income. This type of behavior is already considered business as usual in much of the world.

It would appear that this tax law will boost expectations for corporate earnings. You will see this as analysts go about boosting EPS projections for 2018, particularly across sectors where effective tax rates were closest to that headline rate of 35%. For a group that has paid notoriously low tax rates, such as information technology, the law's passage is not so much a negative as it is less of a positive than it will be for, let's say financials, industrials, transports and energy names. The energy sector, by the way has averaged effective tax rates of 35% over the past five years. My thought is that if you have steered clear of this space, you need to rethink your exposure here.

Exposure to the transports is also key at this time. Lower corporate taxes equals growth, no matter what political talking heads try to tell you. That is common sense. Increased deficit spending could blow up on us later. That's not what we are discussing here. We will trade that eventuality if and when it happens. For now, people and cargo are going to move from point A to point B more often. If not for pleasure, then definitely in the name of commerce. Elementary. Know what I mean?

You know what comes with growth, and deficit spending? Higher yields in the deep end of the pool, that's what. Especially if the ECB and the BOJ start moving toward less accommodative policy. Fat chance? We know that the ECB has to make decisions as they move toward September. The BOJ? Never know with these guys. Japan is finally growing. Bottom line is that you need exposure to U.S. banks.

The leaders should all be good choices. JPMorgan Chase & Co (JPM) appears to be best in class of late. I am already long Citigroup (C) based on valuations and international exposure. That stock appears to have absorbed the news of an expected $20 billion smack down that will be dished out thanks to deferred tax liabilities and repatriation. This is still a quality name that will still benefit as traditional banking once again becomes a viable business. Besides, the firm currently pays an effective tax rate of 31%.

Yes, they did. Will they sell tech because of the new tax law? They might, rabbit, they might. A few weeks ago, I changed gears. I had been trading ranges based on my well-worn disciplines developed over something like a thousand years in the business. A few weeks ago, I started buying tech on days that the market tried to move on this "on again, off again" rotation. I did that yesterday, as well. Not aggressively, mind you. When the water is cold, you move in slowly.

A tax-law-provoked selloff in FAANNG -- Facebook  (FB) , Amazon  (AMZN) , Apple (AAPL) , Netflix  (NFLX) , Nvidia (NVDA) and Alphabet/Google (GOOG) , (GOOGL) -- names (Cramer added NVDA) that pushes investment toward the already mentioned industries that will see much lower tax rates, will be counteracted for tech, in my opinion -- by economic growth. (FB, AAPL, NVDA, GOOGL and C are holdings of Action Alerts PLUS)

Most of these firms do a majority of their business overseas. Growth is global right now. Besides, every industry buys from tech in this modern era. You make widgets? Great. You probably need semiconductors to run business models based on big data and machine learning. You probably also do at least some of your business in the cloud. This economy is not going to travel very far down the tracks in my opinion without tech as a leader. Therefore, I will trade my tech names based on daily, weekly, or monthly flows. I will not be cashing in the group wholesale. That might just be a fool's errand. 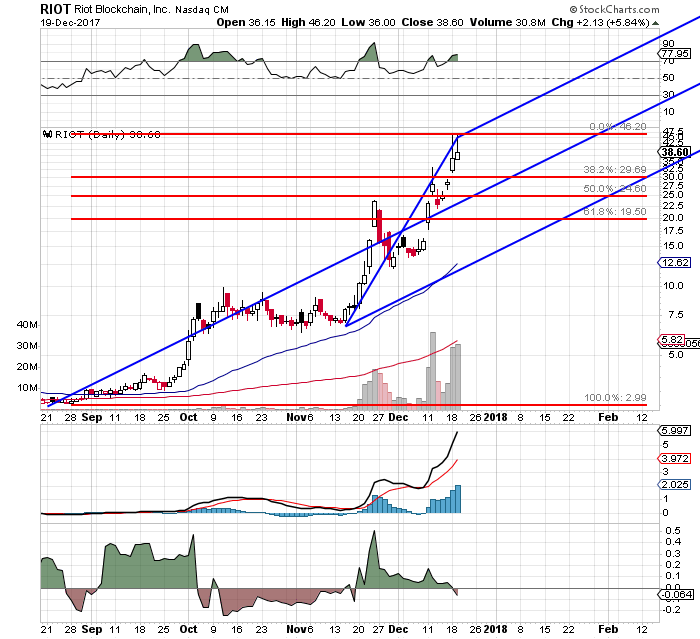 Some background is warranted. This firm has been around in varying forms since 1998. The firm has posted negative earnings per share in every year of its existence, and until recently, was considered a biotech operation, with no institutional investment, and arguably, no hope.

On Oct. 4, the firm announced a strategic investment in Coinsquare. On Oct. 19, the firm changed its name from Bioptix to Riot Blockchain. Oct. 19, for the kids out there who don't know, is an ominous day for market participants. In November, this firm purchased 1,200 Bitcoin mining machines. Now, RIOT is one of the fastest-moving stocks associated with the crypto-currency craze.

Is there a legit business here? I don't know for sure. There certainly is a certain level of marketing genius. The firm was able to raise $37 million in a private investment in public equity deal announced yesterday. The investors were offered a 20% discount on the equity. That said, there are certainly believers, as well as non-believers. The short sellers. Short interest has been rising almost as parabolically as the stock price for two months. Given that the fundamental picture is indeed tough to translate, let's take a look at the technicals.

This stock did close well off of its highs in yesterday's trade (above). There are several characteristics of this chart that stick out. One is the almost ridiculously positive looking Moving Average Convergence Divergence, coupled with the consistently overbought condition that this firm's relative strength has, and still is, existing in.

Cash flow seems to have finally turned, but be cognizant that the stock has experienced outsized trading volumes mostly on "up" days. The Pitchfork model, and even the Fib levels, appear to be almost farcical in the areas where those models might suggest target prices, or support.

I am flat this name. The only itch that I am getting is to get myself short. Given that many have obviously used this stock as a proxy for Bitcoin itself, there are irrational bets on both sides of the market, and I suspect that emotion will drive future pricing more so than traditional analytics.

My best thought is that we eventually see a 50% re-tracement from yesterday's high of $46.20. That is still above where the $37 million investment was made. That investment makes it very difficult to ascertain just how much support there might be in the low $20s. In addition, if a trader were to take that shot, said trader might just have incredible tolerance for risk.

Last thought... Can you even get the borrow on this thing?