Kellogg Co.  (K) was last reviewed way back in August of 2016 where we said, "It would not be unusual for a stock like K to trade sideways to lower over the next several weeks to digest its strong gains. Dips towards $78-$77 are likely to find support and renewed buying."

As things turned out the support in the $78-$77 area did not last long and it reversed to resistance. Kellogg continued to decline until late October this year with prices nearly touching $58 per share. In the past six weeks the chart picture has improved and K is worth another look.

In this daily bar chart of K, below, we can see very heavy trading volume in the end of October. Prices gaped up and then quickly pulled back for a retest of $60 or around the recent low. K rallied above the 50-day moving average line and by early December the slope of the line had turned positive. Earlier this month K rallied to the underside of the still declining 200-day moving average line. K is likely to break the 200-day line on the next attempt.

The daily On-Balance-Volume (OBV) line turned up from a decline and shows more aggressive buying since early November. The trend-following Moving Average Convergence Divergence (MACD) oscillator is above the zero line in bullish territory but recently crossed lower for a take profits sell signal.

In this updated weekly bar chart of K, below, we can see that the November rally failed at the underside of the declining 40-week moving average line. A close above $68 will break the moving average line. The weekly OBV line shows improvement from the middle of October and the MACD oscillator on this time frame gave a cover shorts buy signal. 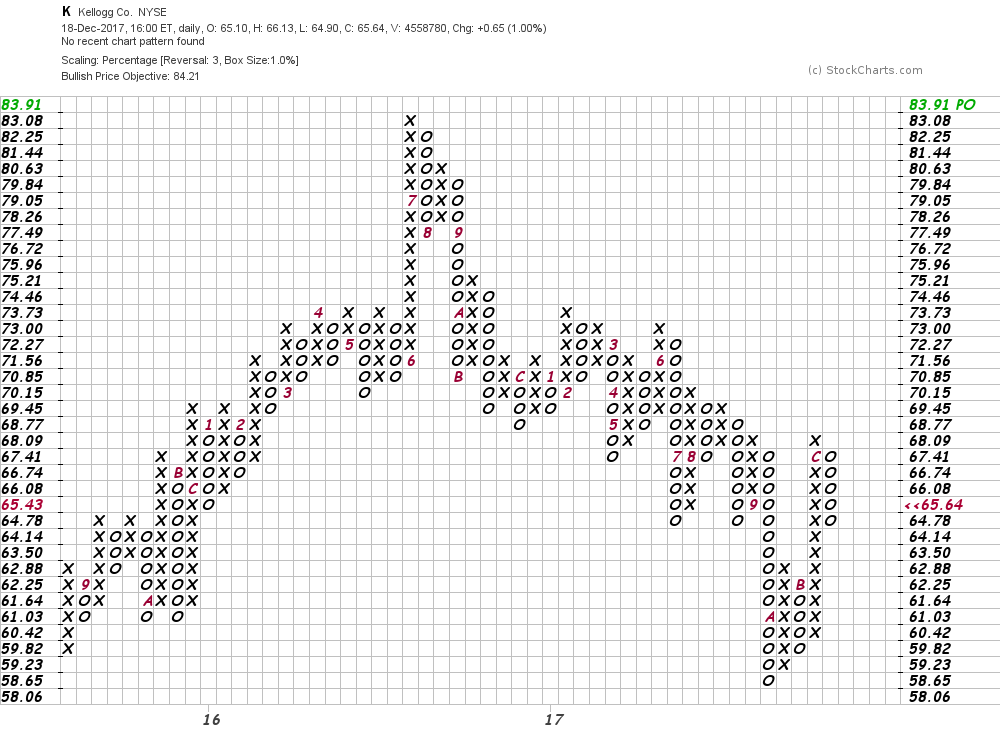 Bottom line: I think K made a tradable low in late October and traders should consider the long side at current levels risking to $62 or on a close above $68 risking a close below $64.