If you're looking for a present under the tree as a bull, then don't sleep on Apple (AAPL) . Yes, this "unheard of" stock appears ready to push higher yet again.

That's not to say it will be easy sledding. The $117 to $120 area has been a thorn in the side, but this pattern of higher lows has created a textbook ascending triangle. Within the triangle, we have a bullish "W" pattern. Ultimately, Apple should grind its way higher to the $127.50 area by the end of the first quarter. 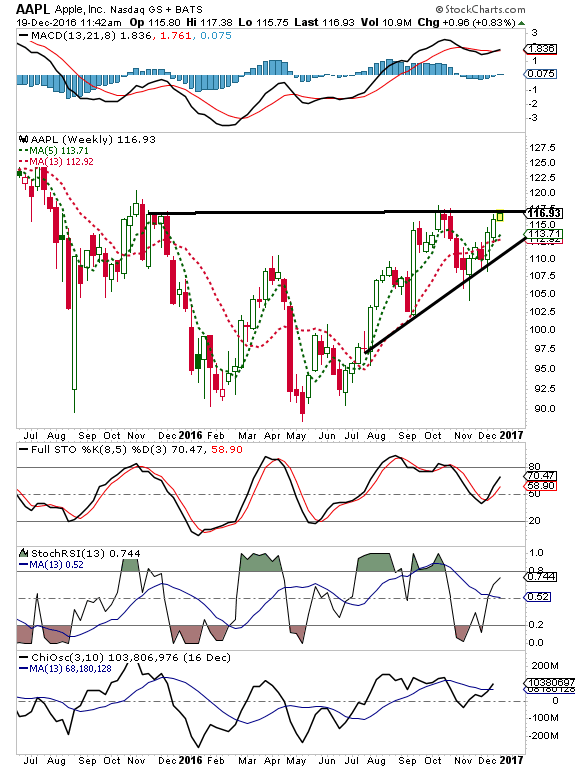 My hope is we'll see it happen before the next earnings announcement. It's not that I'm bearish on Apple's earnings, but the company has been transitioning, at least temporarily, into just an upgrade company. The newer products don't have the shine or the bang of what we felt with the iPad and iPhone. I'm sure we'll get there again, but iWatch certainly isn't it. (Apple is part of TheStreet's Action Alerts PLUS portfolio.)

For whatever Christmas cheer Apple may be trying to offer, Tableau Software (DATA) is delivering the Grinch antithesis. DATA has already been cut in half for 2016, but the bounce in the first half of the year is playing out more like a bearish flag than some strong-hand bargain buyers. For all the technical strength I see in the Apple chart, I see weakness in DATA's chart. The only saving grace for DATA may be the grossly oversold StochRSI and Chaikan Oscillator, but the bounce in the technicals is failing, as is the hope for a bullish divergence. 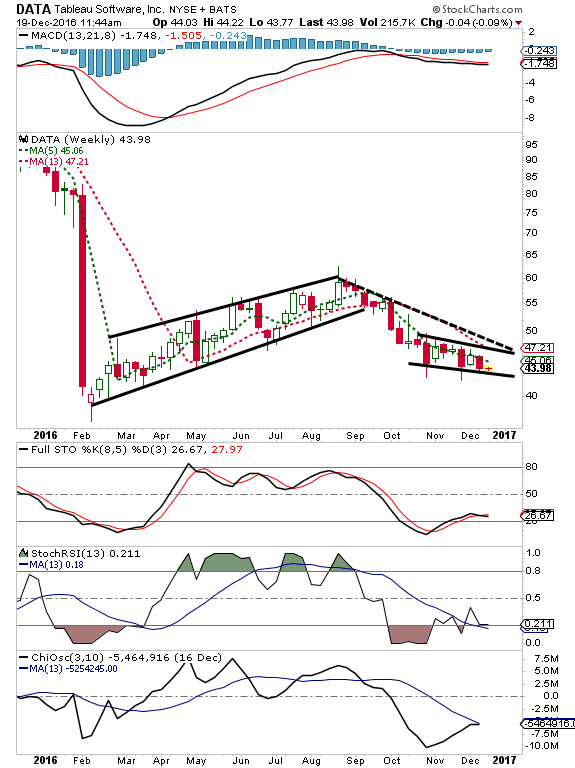 Until DATA prints a close above $47, this one is neutral at best. A close under $43.50 sets us up with a quick test of $40, but I would not consider nibbling on this stock until the mid-$30s at that point. There are simply better opportunities out there.

For now, I'll take that opportunity in some Apple around $117.

Smartphone Demand Appears to Be Getting Hit Hard

With retail stores shut and many consumers viewing smartphone upgrades as discretionary purchases, signs are mounting that smartphone demand has fallen sharply in recent weeks.

As we continue to implement social distancing, keep in mind that it will happen commercially as well.

INTC has seen continued buying, and what draws me to AMD is the very different price pattern.

A technical strategy for the cyberscecurity giant.

Should growth expectations have to come down for more than a few months due to macro headwinds, tech companies sporting high valuations will likely see multiple compression.