NetEase.com (NTES) is one of China's top internet and online game service providers and a review of gaming stocks today wouldn't be complete without it. Let's check the charts and indicators.

In this daily bar chart of NTES, below, we can see prices were in a $255 to $315-$335 trading range from February to into November. There were a number of downside tests in the $270-$255 area and a number of tests around $315 or so. Prices finally began to strengthen in earnest in October. NTES stayed above the rising 50-day moving average line and in early November it gaped above the rising 200-day line. In the latter part of November the 50-day average crossed above the 200-day average for a bullish golden cross. The movement of the On-Balance-Volume (OBV) line over the past twelve months is interesting. From January to early July the OBV line moved sideways to just slightly lower. In September the OBV line weakened and did not bottom out until late October. In early November the price action turns stronger and the OBV started to rise signaling more aggressive buying. The Moving Average Convergence Divergence (MACD) oscillator crossed to the upside in early September for a cover shorts buy signal. By late October the MACD oscillator moved above the zero line for an outright go long signal.

In this weekly bar chart of NTES, below, we can see that NTES traded below the rising 40-week moving average line from August through October. In November NTES rallied above the 40-week line where it still is today. The weekly OBV line has been neutral since last October and a new high from this indicator would go a long way to confirming the new price highs. The weekly MACD oscillator in the lower panel crossed to the upside in early November for an outright go long signal.

In this Point and Figure chart of NTES, below, we can see that a rally to $376 on NTES will be a fresh upside breakout and open the way to potential gains to the $411 area. A decline to $348 would weaken this chart. 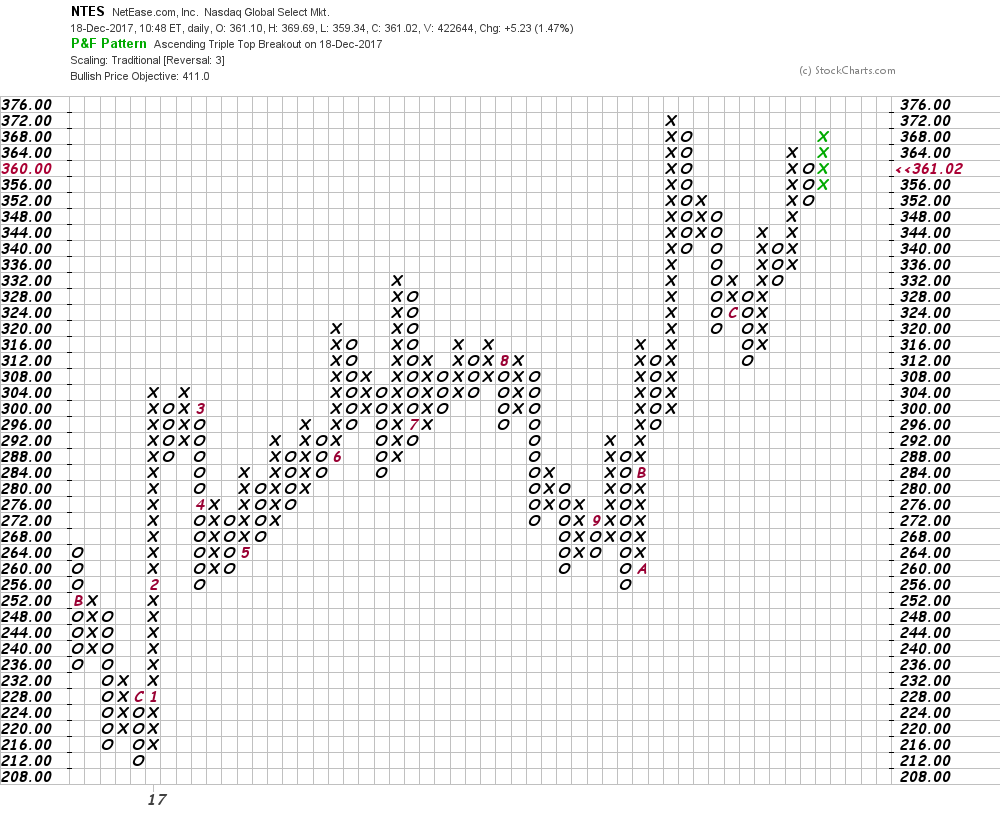 Bottom line -- NTES looks like it has turned higher and could reach the $400-$411 area in the days and weeks ahead. Trade NTES from the long side on available weakness. Risk a close below $330.