With British game development studio Sumo Digital going public this morning in London it looks like a good time to review some gaming stocks such as Electronic Arts, Inc. (EA) . We last reviewed EA's charts and indicators back around the middle of July, where we said, "The daily and weekly indicators on EA are mixed -- some bearish and some bullish. Strength to $116.52 will open the way on the upside while a decline to $104.44 is likely to precipitate further declines." With some hindsight we can see that EA has done both -- first it rallied above $116.52 for an upside breakout and reached a high of $122.79 before rolling over and declining to $100 earlier this month. What do the charts and indicators of EA look like now?

In this daily bar chart of EA, below, we can that prices are below the declining 50-moving average line but finished above the rising 200-day line on Friday after trading below it for a couple of weeks. The decline to around $100 earlier this month filled most of the price gap from May. The daily On-Balance-Volume (OBV) was declining from early June until early December signaling more aggressive selling than buying. It is early but it looks like the OBV line is turning up again. In early December the trend-following Moving Average Convergence Divergence (MACD) crossed to the upside from below zero line for a cover shorts buy signal.

In this weekly bar chart of EA going back three years, below, we can see that EV has spent the majority of time above the rising 40-week moving average line. In the past three weeks EA has twice closed below this long-term trend indicator. The weekly OBV line only shows a three-month decline. The weekly MACD oscillator is in a bearish mode and pointed down toward the zero line. Depending on the future price action of EA we could see the lines cross upward or we could see the lines go below the zero line for an outright sell signal.

In this Point and Figure chart, below, we can see what will be a more positive chart if we see EA trade up to $109.77. That would be a small double-top breakout. There is potential overhead chart resistance but in this bullish stock market environment we could just rally right through it. 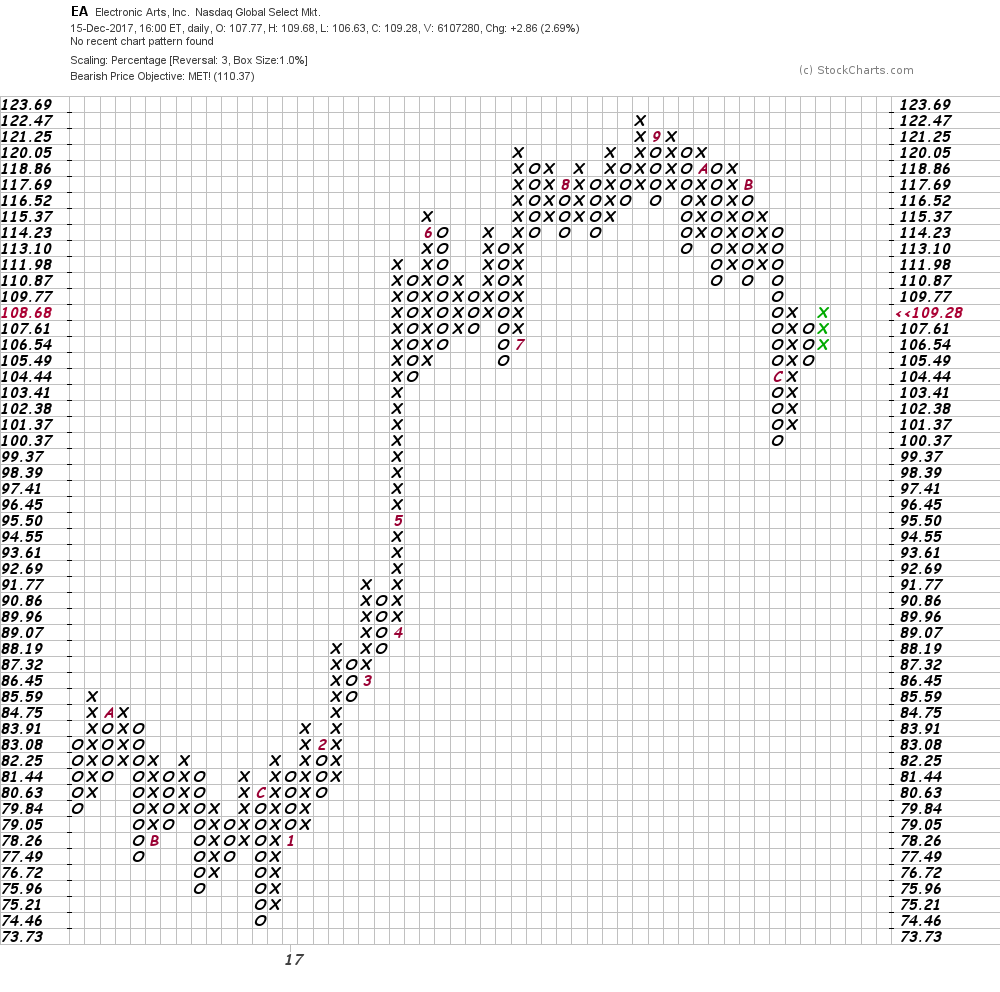 Bottom line: Aggressive traders could go long here risking a close below $101 or just above the recent low. A close above the 50-day moving average line around $111 would be a technical reason to add to longs. A retest of the highs around $120-$121 would be the initial upside price target.

Get an email alert each time I write an article for Real Money. Click the "+Follow" next to my byline to this article.
TAGS: Investing | U.S. Equity | Technology | Entertainment | How-to | Stocks