The best way to find stocks that are likely to produce superior gains in the year ahead is to identify a technology theme that is likely to gain traction. New technology themes are not easy to find, but one that gained some attention in 2016 and looks to gain further traction in 2017 is the technology that merges the cloud with mobile phones. Companies that want to reach their customers through the phones are faced with building extremely expensive infrastructure, but there are now solutions that make this much simpler and less expensive.

The technology is known as CPaaS, which stands for "Communications Platform as a Service." This technology allows a business to integrate communications with customers into its business. For example, a company can use Twilio (TWLO) to send a million short messages to customers' phones for a minimal expense. There is no need for the costly telecom infrastructure.

Another example of CPaaS is a video-enabled help desk. Chat, text, speech recognition, multimedia messaging, etc. can all be built into a business application with this. A company can send pictures and video to a mobile device over a cellular network in a simple and cost-effective manner.

So how do we capitalize on this theme? There are two stocks that may offer good potential. Twilio was a high-flying IPO that ran straight up and then straight down. With a customer list that included Action Alerts PLUS holding Facebook (FB) and Uber it was a glamour play.

Vonage (VG) is an old-timer with a profitable legacy niche that made a strategic acquisition to reinvent itself as a CPaaS provider.

TWLO put CPaaS on the map when it had its IPO in late June. It was expected to price at $12 to $14 with Goldman Sachs (GS) and JP Morgan (JPM) serving as underwriters. It opened at $23.99 and proceed to run up to over $70 by September. A combination of a small float and wild momentum made the stock the king of momentum for a while, but a combination of another offering, fears of competition and lockup reversed the momentum. Now the stock is hitting the same prices it hit on the first day that it traded publicly.

One of the big reasons TWLO has to regain its luster is that it has a huge lockup of shares expiring on Dec. 20. Ten million shares that have been locked up for six months will begin trading then. In addition, there is tax-loss selling occurring as essentially anyone who bought after the IPO now has a short-term loss. Many book that loss now to offset gains.

TWLO is still not cheap, but its revenue grew 62% in the third quarter. About 30% of its revenue comes from 10 large customers, which causes a little concern. On the other hand, it is a fast-growing, innovative name close to offering a good entry point.

I expect that with the lockup overhang expired and the conclusion of tax-loss selling it can enjoy a positive January effect and see renewed momentum. 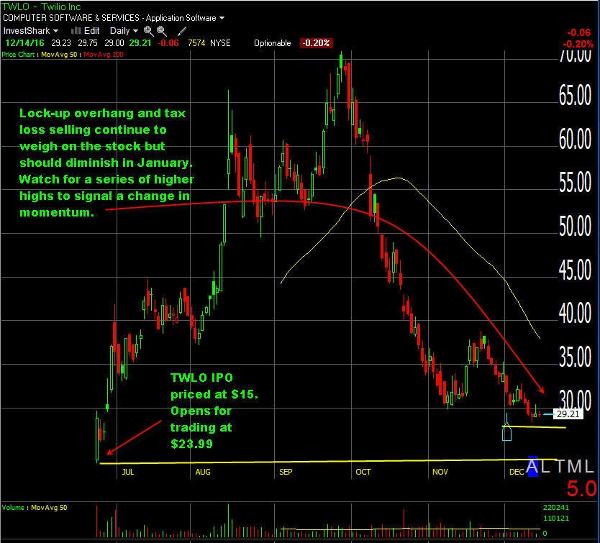 Vonage Holdings (VG) is a less obvious play on CPaaS. Its legacy voice IP business has been driving it for years but development of its Nexmo platform under CEO Alan Masarek, former Google senior director, is driving a major change in the business focus.

VG's consumer business is dropping, but in the third quarter its business sector jumped 24% and its profits tripled on a GAAP basis.

VG serves smaller companies than TWLO and has less risk due to concentration but also less potential for big moves. Technically a move over the $7 level should trigger some momentum and I'm holding a position now. VG offers a much easier entry, but it is not going to move the way TWLO will if it catches fire again. 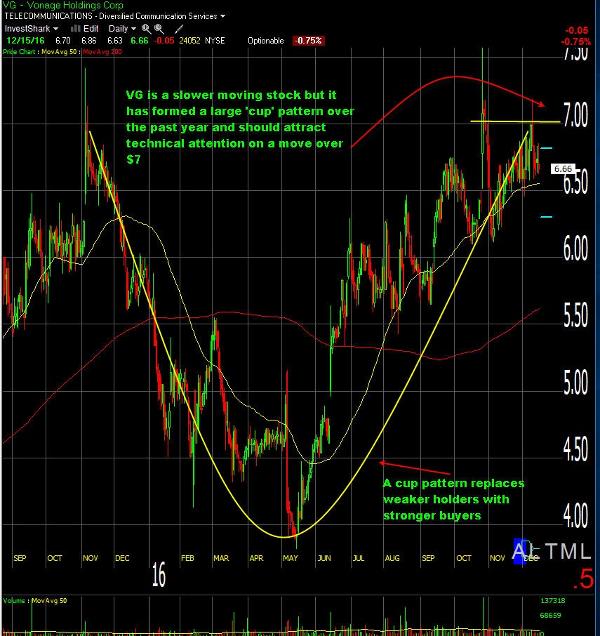 Catching the right theme at the right time always makes for good trading and CPaaS may be a niche to watch in 2017.

Get an email alert each time I write an article for Real Money. Click the "+Follow" next to my byline to this article.
TAGS: Investing | U.S. Equity | Technology | Telecom Services | Markets | Stocks