"Adaptability and constant innovation is key to the survival of any company operating in a competitive market." -- Shiv Nadar

My office is set up just the way I like it. Many offices are designed so that the occupant's desk faces the door. Sort of welcoming. Not mine. My desk faces the window. I like the option of being able to see the street (I am on the second floor) while I work. Just to the left of my window is a television that I almost always have tuned to the financial networks. To my right? The radio, same purpose. There is a trend developing, and intensifying outside of that window late in the holiday season. It just keeps getting worse. The constant flow of delivery trucks. The United States Postal Service. United Parcel Service (UPS) . FedEx (FDX) . They're all very busy. Sometimes two trucks bearing the same corporate logo are represented within my field of vision at the same time. Interesting. Very Interesting. Amazon (AMZN) .

I conduct my informal poll. That means that I asked my spouse of 28 years what percentage of holiday shopping she thinks that she done over the internet this year. She laughs at me. "I don't go to stores anymore." Her answer: "100%". I ask her how much of that was done at Amazon. Her answer is less precise this time. "Most of it." She also names four other websites, the only one of those that I even heard of was Walmart (WMT) . Hmmm. So, my brain wonders. I know that e-commerce is the way that retail has gone. I actually have gone to the mall near my house on Long Island twice over the past week. No crowds. No crowds at all. Very un-December like. There are other people walking around the place. Not too many, though, and they all seem to be middle aged men driven by habit, much like myself. Interesting. Amazon.

Nike (NKE) is one of the most valuable brand names in the world. Who would argue that point? Over the summer, Nike became an official first party seller on Amazon. NKE, the stock, is up a rough 25% since late August after what had been a very tough first half. Hmm. Ever hear of Simeon Siegel? Siegel is an analyst at Instinet who was quoted earlier this week regarding Amazon's intrusion into this space. "We believe Amazon has the largest TAM (total available market), doesn't carry socio-economic retailing stigmas, can stock a limitless number of goods on its virtual shelf and knows customers better than they do." Artificial intelligence? Machine learning? Big data? Siegel went on. "Amazon's path to book dominance provides a potential road map for apparel success, with the fiscal 2007 media progress sharing similarities to its fiscal 2017 apparel achievements." Whoa.

Analysts at Wells Fargo were even more upfront this week. "As mall traffic continues to decline and department stores are falling out of favor, vendors need to look elsewhere for growth and Amazon is the most compelling and obvious vehicle for this." No kidding.

Survival of the Fittest

Retail as an investment has come around this holiday season. The SPDR S&P Retail ETF (XRT) had rallied hard since mid-November. That fund has also come in rather hard this week. There are signs of panic. On Wednesday, Amazon announced that the firm will be delivering packages for Prime and Prime Now members until 11:59 pm on Dec. 24 through its free same-day and one-day shipping options. On Thursday, Target (TGT) , which has rallied and is pressing up against resistance, announced that the firm was acquiring a same-day delivery service known as "Shipt". The only way to compete is to simply compete. Evolve or die.

Those who follow me closely know full well that I have long embraced Walmart as the one who could possibly stand up to Amazon's growth. Walmart has done this quite well by acquiring several online businesses aimed at a clientele that might normally be attracted to a Walmart store as well as clients who stray, demographically far from the typical Walmart shopper. Walmart has also reached out and made alliances with the likes of Action Alerts PLUS charity portfolio name Alphabet (GOOGL) and other retailers in a way that try to create a virtual shopping mall, and leave open the possibility of voice ordering so as not to be left behind should Amazon's Alexa devices make huge inroads in that arena.

I have also championed Kohl's Stores (KSS) for a far different set of reasons, and been rewarded nicely. Not only does KSS pay a very nice dividend yield, the firm prepares to sub-lease space inside its "non-mall" standalone stores for struggling retailers, so that the firm might maximize its own potential for real estate use. This also offers these other competitors a way to reduce overhead. Kohl's has also cozied up to Amazon in the way that a smaller kid might befriend a bully so as not get beaten up. KSS is, in some locations, now accepting returns on behalf of Amazon -- returns that have nothing to do with any transaction made at Kohl's. In some of these locations, Kohl's is also offering Amazon devices for sale in store space that has been set aside solely for Amazon. Interesting. This could be a way for Amazon to decide if it needs to have a brick and mortar option itself. This could, in my opinion, make KSS even more interesting as time passes.

Then there are other "specialty retailers" that I feel might just survive better than multi-line retailers, simply because it is difficult to replace their brick-and-mortar experience. For one, I think of the Home Depot (HD) . Yes, many planned home improvement jobs can seem susceptible to internet purchasing. That said, how about when there's water in the basement, and you need a sump pump right now? How about the homeowner who sets about completing a project on a Saturday morning only to realize that he or she does not quite have everything they need? There will be a continued need for the likes of this kind of store to maintain a physical presence.

I am actually long most (not all) of the names mentioned in this article for the reasons already mentioned. Then I got to thinking. What has moved into the malls as old-school retail has moved out? Gyms. Ding ding ding. How about a stock like Planet Fitness? A discount gym. My brain didn't even go there on its own. Brian Sozzi, who you all know and love, actually mentioned it. That stock has ramped up a couple of times this year, most recently upon its early November earnings release, when it raised guidance. The stock price is a bit rich, trading at 32 times next year's projected earnings, so you may want to watch the name before plunging right in. But the projected growth is indeed there, and both the quick and current ratios paint the picture of a firm able to manage its debt situation. Planet Fitness sees full year 2017 revenue at between $425 million and $430 million. An average of 12 analysts see full-year 2018 revenue at more than $471 million. Hmm. Let's take a look.

The stock of Planet Fitness (PLNT) has taken a breather in December after a meteoric rise. Is this where fortunes turn, or is this maybe the pause that refreshes? I am considering this stock for myself, so unlike much of the drivel you'll hear in financial media today, this is the actual homework of an actual investor. A couple of things here tell me to slow it down. The first thing I notice is the drop off in money flow. The second is the bearish crossover of the 12-day exponential moving average (EMA) over the 26-day EMA in the moving average convergence divergence (MACD). The fact that they are both so far above the zero line does somewhat ease that significance to me. Relative strength has eased, but I want to see that before I purchase anything anyway.

You can see that a Pitchfork model fits this chart quite well. The November breakout pressed the stock up against the resistance offered by the central trend line. The stock price has stooped there, but has not cracked. A traditional Fibonacci model suggests that any fall back in price might be caught by the market above $27, a level that already served as stiff resistance from September through November. You can bet your tail that the algorithms know this, so you should too. My thoughts? 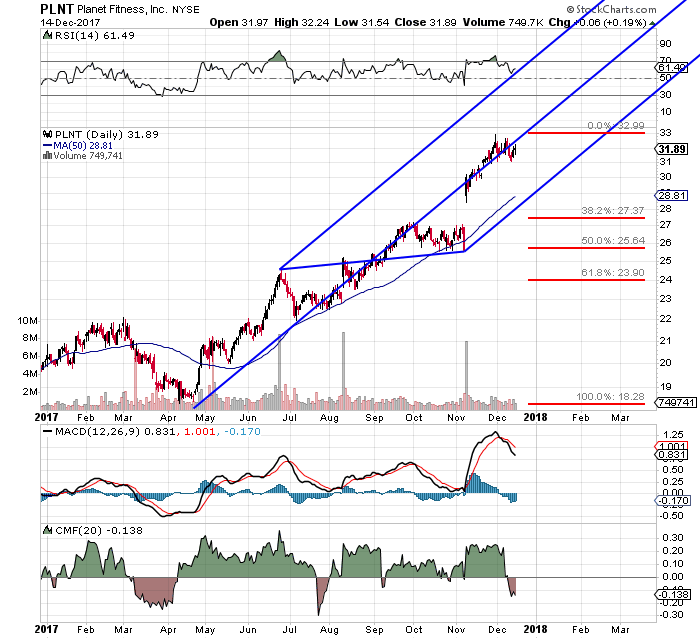 I will hold my fire at this level. I am interested in the business. On a move above $33, I likely initiate with an eighth of an intended long position. On any move lower, I wait until the algos take the stock close to $27. That is where I become aggressive, should the fates allow. My version of aggressive is initiation with a third of a position. For now, though, I wait, and set my alarms.

Guess you kids might have noticed the Walt Disney (DIS) deal with 21st Century Fox (FOXA) ? I am long Netflix (NFLX) , just small, but the name is still on my book. Time to take a hike? Let's take a look.

Two things jump straight out at the investor on this chart. The suddenly ugly money flow, for one. The series of lower highs and lower lows (orange trend lines) suffered by this name since October, for another. The good news for the hopeful is that this stock has already shown standard support at a 38.2% re-tracement off of the highs at $181.

There is also the matter of a decisively positive moving average convergence divergence (MACD) crossover taking place right now. My thought? If you want out of the name, you might still get $193 for the shares in the short term. I would set my stop-loss for the stock at the $181 level though, as a re-test of that spot could be dangerous. The loss of Disney content was already an issue. Now, the potential fold-up of Fox content into Disney compounds the issue for Netflix. Self-created content gets expensive fast. 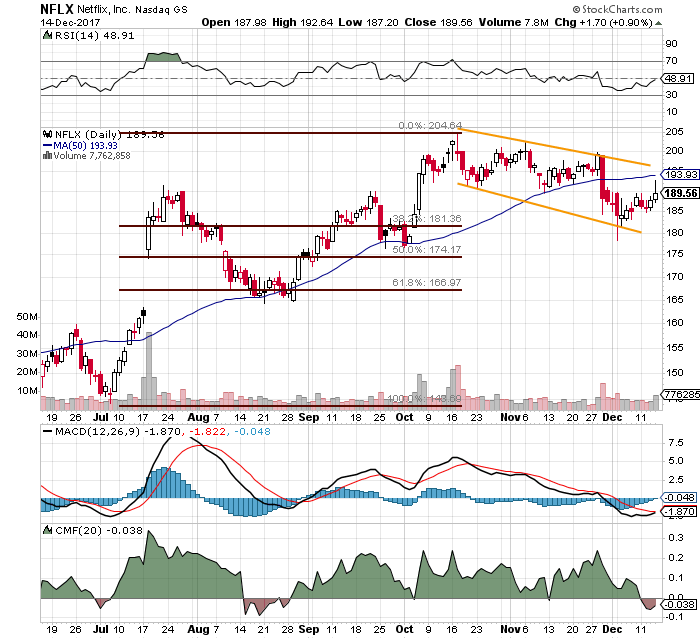 All that said, I don't see the need for a fire sale. If the stock is no longer investable (which it still may be), then it certainly is still tradeable. I am not panicking here. Then again, I never panic.