"If you're gonna play with rattlesnakes, you better know what rattlesnakes do" -- Smokey Yunick

Equity markets seemed to move higher on the FOMC policy announcement, or was it the enhanced likelihood of tax reform? Perhaps there were expectations for an ECB policy change Thursday morning? Regardless, markets cooled off prior to the closing bell, taking some shine off the day's performance. The violent moves were seen in U.S. Treasury markets, and that put a nasty hurt on the financial sector. Those moves too, abated somewhat overnight. There is a lot to take in and to understand when considering how to position oneself at this time. Then, for traders, keep in mind that Friday brings not only a quadruple witching of expirations, but a host of equity indices will rebalance themselves for year's end as well. This should be a very high-volume event.

The headline? The fed funds rate takes another baby step to the upside, now sporting a range of 1.25% up to 1.5%. Wednesday's policy statement and press conference were seen as dovish, despite the general expectation of three rate hikes in 2018. These things are almost impossible to predict, as those serving at the Fed over time have proven. In fact, when taking a look at the revised dot plot offered yesterday, one can see that two Fed officials actually see a 4.1% Fed Funds Rate in 2020, while another sees that benchmark remaining where it is right now for another three years.

That means that of the 16 folks considered worthy of meaningful opinion here, two (or 12.5%) actually see the central bank raising rates four times a year, basically forever. The only reason that I could see for something like that, would be if the nation were gripped in an epic battle versus screaming consumer level inflation. Yet, none of the 16 see anything close to screaming inflation over this period. In fact, the highest that any of our 16 esteemed professional sees core PCE in the coming three-plus years in 2.3%. Kind of leaves you wondering if everyone involved is actually doing their work, or if there are some just mailing it in.

Regardless, balance sheet management continues to hum along behind the scenes, to the point that any mention was left off the official policy statement. I guess that's the way that they want to go with this. I, for one, would like a sentence on that program's progress left in the statement, especially as we approach the point (should be April-ish) when the Fed is a net extractor of liquidity, instead of a net provider. I think that's important. But, I have never lived behind castle walls. What do I know?

By the way, the odds of the next rate hike as priced in by futures markets trading in Chicago have dropped for March from more than 60% to 51%. That's something to keep an eye on, as Janet Yellen's leadership is swapped out for Jerome Powell's. On top of that, both of yesterday's dissenters, Charles Evans of Chicago, and Neel Kashkari of Minneapolis will lose their votes in 2018, while perma-hawk Loretta Mester of Cleveland regains hers.

We'll hear from the European Central Bank Thursday morning. The eurozone economy has been hot. One of the main reasons why monetary conditions have not tightened in the U.S. despite two years of effort by the U.S. central bank have been the aggressive asset purchases made by both the ECB and the Bank of Japan. This has kept the long end of the curve from performing as one might expect, while also keeping planet Earth awash in liquidity. 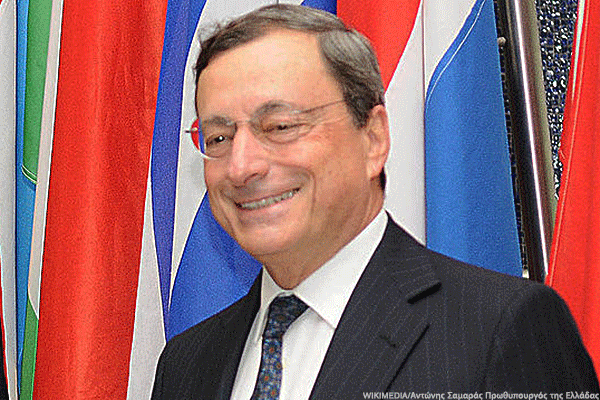 That began to change somewhat in October, as the ECB pledged to keep its quantitative easing program chugging along, at least until September of next year, but halved planned monthly purchases to 30 billion euros ($35.5 billion). We would not expect to see any profound changes made to that plan today in Frankfurt. We will however see the ECB's forward-looking economic projections. More growth? Still no real progress on inflation? Sound familiar? The real discussion for the ECB, barring any surprises, will evolve around what to do as September approaches. Today's dog-and-pony show will merely target, in my opinion, euro valuations. I would love to hear Mario Draghi's answer to some of the same Bitcoin questions that were posed to Janet Yellen on Wednesday.

Ever hear a rattlesnake in the dark? Kind of scary, right? First, you stop moving. Motionless, you try to figure what direction the rattle is coming from, and how far away it is. Very slowly, you try to creep away from the rattle until you know you are safe. What if you hear multiple rattles in the dark, from different directions? Been known to happen. There are some things more terrifying, but not too many. That's kind of where we are on tax reform.

To be sure, there are many positives. Growth-producing positives. The top individual tax rate should drop from 39.6% to 37%. This should help some of the middle-to-high-income folks in the highly taxed blue states that could actually see their net taxes rise. The last we heard on that was a proposed cap of $10,000 on state and local tax deductions. If you live in a blue state, then you know that a cap of $10,000 just barely scratches the surface, and could do serious damage to property values.

The most important slice of information in this bill is obviously the corporate tax rate. This will have the most dramatic impact on the broader economy. That rate is said to have dropped from 35% to 21%, just a smidge above the 20% already passed in each chamber of congress. This has the potential to turbo-charge S&P 500 earnings in aggregate, from the $146 already expected to something in the area of $164, counteracting the potential of liquidity withdrawal should global central banks allow the long end of the yield curve to trade freely. Now, my math is not perfect, and I'm doing this in my head at 4am, but that's big growth from this year's number in the low to mid $130's.

More good news for corporations will be the elimination of the corporate version of the Alternative Minimum Tax AMT. This will preserve for many the deduction for research and development -- a crucial point for tech names. Then, there's the tax on pass-through businesses that is still kind of murky. The deduction there will likely end up being either 20% or 23%. Either way, this is likely to be seen as relief from individual rates, but still as preferential treatment for corporations.

The bottom line is that probably by next week, our legislators (working overtime) will vote on a $1.4 trillion tax cut over 10 years that will possibly add $1.0 trillion to the federal deficit over that time. Infrastructure build, anyone? Hmmm.

Chart of the Day: II-VI Inc.

What to make of II-VI Inc. (IIVI) ? The stock has taken a holiday season beat-down as Action Alerts PLUS charity portfolio holding Apple (AAPL) chose Finisar (FNSR) for a $390 million investment. Apple now plans to buy 10 times the VCSELs going forward than they have in past quarters. II-VI is also a manufacturer of VCSELs. That is not its only line of business by any stretch, but the market reacted to this news with violence to the downside. I am long the name. Still up, mind you, but far less so than I was a couple of weeks back. Time to get out of Dodge? Let's explore.

What is a VCSEL?

A VCSEL is a type of semiconductor laser diode whose laser beam emission is perpendicular from the top surface. This is contrary to conventional edge emitting semi-conductor lasers. Those conventional types emit from surfaces formed by cleaving the individual chip out of a wafer. What are VCSELs good for? Fiber optics, computer mice, precision sensing, and laser printers. Still with me? Good. II-VI also manufactures optics for the military, which reminds me of another story -- but I'll leave that for another time.

Is this autumn's trend broken? That's really the question here. Or was that rise merely the result of misguided expectations regarding Apple's intentions? One who takes a look at this name will immediately see that relative strength and money flow are currently struggling just to keep their respective heads above water. 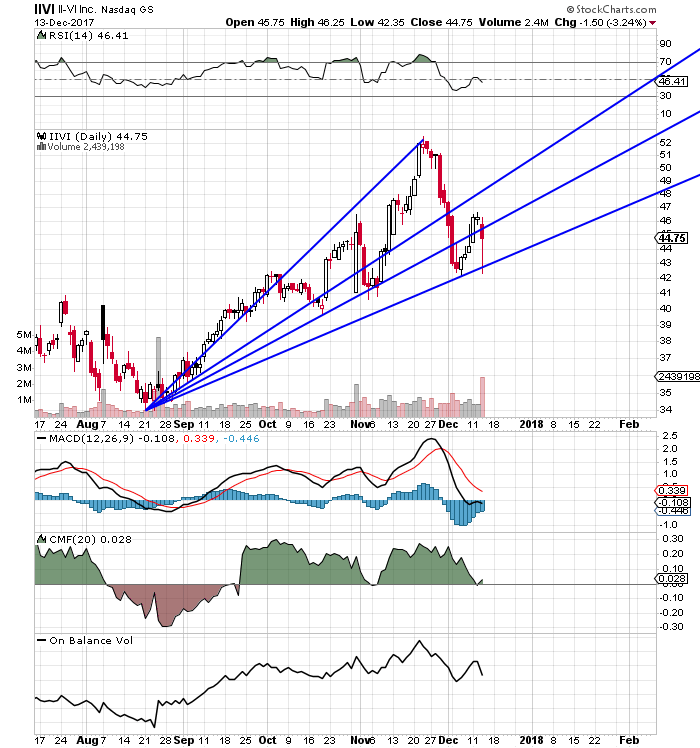 The daily moving average convergence divergence (MACD) took a ferocious turn for the worse in late November, and has not shown any sign of reversal, though the nine-day exponential moving average (EMA) is well off its worst levels. On-Balance Volume pretty much confirms the story told by the MACD. So, what now?

Here is where I go to a tool we know as the Fibonacci Fan. Drawing a line from the start of the trend to the extreme point of said trend, the fan will extend for you the 38.2%, 50%, and 61.8% Fib levels into the future. So, if the trend remains intact, the tool projects support levels (or maybe panic points) over time.

In this case, we can see that our beloved trend has been severely tested at the extreme 61.8% retracement level twice in December, including Wednesday's volatile action. My decision based on this chart is that the name can be added to small in the $43 area for now. I will not be aggressive. Should I see a break of this level and failure by the name to retake the spot at least one time, I take my football and I go home. Notice, as the year closes, the point of action moves from $43 to $44, and as January shuts down, all the way to $47. This is a living, breathing animal; your thinking must not stagnate. Stay focused.

I feel I must raise my hand like I committed a foul.

Is the Market Getting Too Technical?

We're not yet at an either/or market yet, and maybe we won't get there, but the action is starting to look a little be familiar. Let's check the indicators.