Discovery Communications Inc. (DISCA) declined from May until early November. Prices have bounced to the upside the past four weeks, but is it enough to move the needle from bearish to bullish? Let's check the charts and indicators to see what we might discover.

In this updated daily bar chart of DISCA, below, we can see the decline from early May into the November nadir. Early this month, the price of DISCA rallied above the declining 50-day moving average line. The 200-day moving average line is still pointed down and above the price action. There are three volume spikes - one in late July as prices start to cascade lower and then two since early November as prices start to turn around to the upside.

The movement in the On-Balance-Volume (OBV) line gives us the right direction with the OBV line going down from July to early November and then turning up in early November. The Moving Average Convergence Divergence (MACD) oscillator was below the zero line from early May until this month. In the middle of November, we can see a cover shorts buy signal and earlier this month an outright go long signal as the MACD oscillator moves above the zero line.

In this weekly bar chart of DISCA going back three years we can see a decline, followed by a long consolidation pattern and another decline. Prices are below the declining 40-week moving average line. The movement of the weekly OBV line is interesting and generally moves in concert with the price action.

This year, the OBV line moves quickly lower from July to late October and then reverses sharply to the upside. The weekly MACD oscillator crosses below the zero line in May for a sell, and in November crosses to the upside for a cover shorts buy signal. It will probably take a long period of time before an outright go long signal is generated.

In this Point and Figure chart of DISCA, below, we can see a peak in 2014 followed by a decline to late 2016. From May the decline is pretty much straight down to the $16.00 level. DISCA has rebounded recently and a possible $27.50 price target is shown. 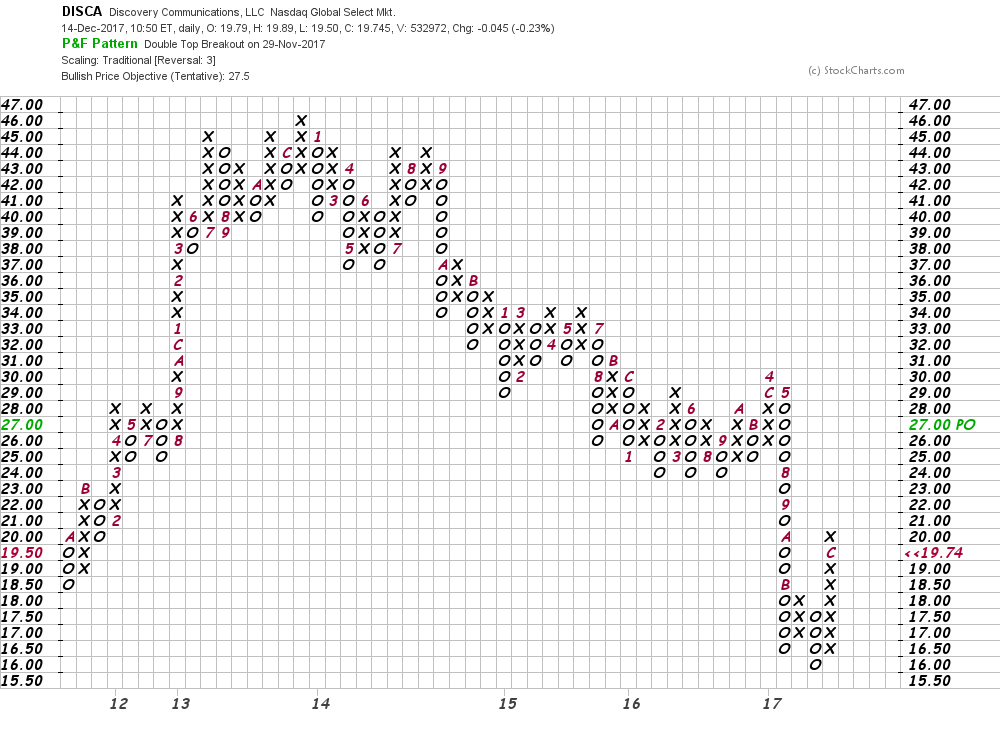 Bottom line: the landscape for media/entertainment companies is changing quickly. A nimble approach is probably required. A strong close above $21 would be bullish for me, and a decline below $17 would reawaken the bear.

Get an email alert each time I write an article for Real Money. Click the "+Follow" next to my byline to this article.
TAGS: Investing | U.S. Equity | Industrials | Consumer Discretionary | Markets | How-to | Risk Management | Stocks

Looking at This Stock Will Give You a Light Bulb Moment

Here's how to play this Acuity Brands, a global leader in light fixtures.

The intertwined companies made healthy gains at the end of the week, though the reason for them wasn't immediately evident.