Alaska Air Group (ALK) recently made new 52-week highs, but do the charts and indicators suggest a rally to cruising altitude or will prices level off soon? Let's take a closer look.

In this daily chart of ALK, above, we can see a downtrend through June followed by an uptrend. The rise from late June to late October was relatively slow, but ALK picked up a tailwind in November. A bullish golden cross of the 50-day and 200-day moving averages did not occur until November. The On-Balance-Volume (OBV) line made a low in June but has risen ever so slowly. Buyers of ALK seem restrained. In the lower panel is the 12-day in December the momentum indicator made a lower high. The pace of the advance slowed just as it broke out to new highs. We also can point out that volume did not expand as prices made new highs. No animal spirits.

In this three-year weekly chart of ALK, above, we can see that prices have broken out over the highs of 2015. The slope of the 40-week moving average line has turned positive. The weekly Moving Average Convergence Divergence (MACD) oscillator is bullish. What has not joined the rally is the weekly OBV line not making a new high with the price action. 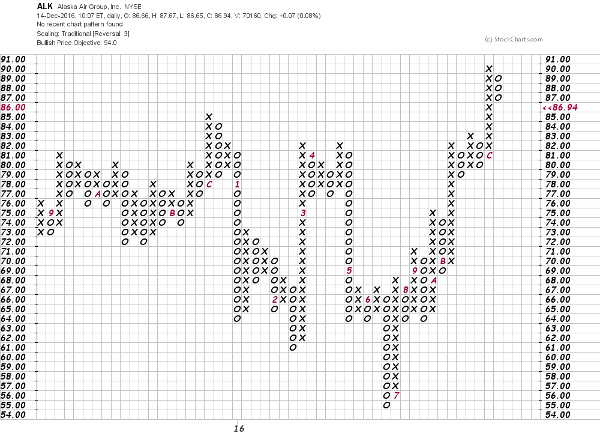 In this Point and Figure chart of ALK, above, we can clearly see the breakout to new highs. The price target is only a few dollars above here.

Bottom line: Can prices go higher without confirmation from volume? Yes, but it does not give me confidence.

ChargePoint Could Bounce, but Is That Enough Juice for Investors?

Let's check on the charts of this company building out an EV charging network.

2 'Off the Radar' Names to Consider

Insiders have been adding to their stakes in Greenbrier Cos and Ring Energy.