"Real knowledge is to know the extent of one's ignorance."   --Confucius

Apparently, as U.S. lawmakers try to mesh the tax reform plans already passed by both the House and the Senate, the corporate tax rate is back in play. You already know that both legislative bodies have passed, as part of their overhaul, 20% rates, which would be down from a headline rate of 35%. The reason is simple --  revenue. Lawmakers are walking a fine line, trying to incentivize corporations to invest here rather than elsewhere.

This is the deal. Without tax reform, expectations for (S&P 500) earnings growth are running at about 11% for 2018 -- or $146. This is with no changes made to the tax environment. For each 1% that you can slice off of the that headline 35% rate, expectations for these aggregate earnings may be increased by a rough $1.40. The downside is that for each 1% that comes off of that rate, you can also probably cut expectations for federal revenue by about $100 billion over 10 years.

Now, in an effort to alleviate the level of deficit spending that will be required to sustain some semblance of a still-to-be-tackled 2018 budget, while effectively reducing revenue, rates as high as 25%, but more likely in the neighborhood of 21% or 22%, are being bounced around -- if not in our nation's capital, then at least in the financial media.

The one caveat: Whatever the final reduction that these folks agree upon would have to be low enough to deter competitor nations from simply offering lower rates still. Not easy at all.

Is there a deal done in 2017? The Senate had planned to put in a full week. Those workaholics. The last scheduled day in session for House of Representatives for the year is tomorrow. This crew may not get their annual two-plus week holiday vacation. Everyone together now... "Awww."

There's a Hole in My Bucket

Last night, the American Petroleum Institute reported in their weekly data that U.S. WTI Crude supplies had drawn down by some 7.4 million barrels, though they also reported a build of 2.3 million barrels of gasoline. These numbers seem somewhat similar to last week's data. Energy traders will look to Wednesday morning's EIA numbers for confirmation.

Yesterday, you probably noticed that British refiner Ineos announced the shutdown of its "Forties" pipeline system for what may be weeks due to a widening hairline crack. This shutdown effectively takes 445,000 barrels of North Sea Crude out of the ballgame for the time being. Yet after spiking early yesterday, the commodity sold off and settled considerably lower.

For the West Texas variety, the spike in prices early yesterday provoked some profit taking, as well as sales of future production. Couple this pipeline shutdown with the rebalancing efforts already announced by OPEC and pals, and then tack on this hedging activity... and suddenly the $58 level seems to be where U.S. production might just make its stand.

For now, that spot remains resistance, and will likely be tested again this morning. One day though, I suspect we may see $58 as support. For me at least, that would change the way I approach both my targets and panic points for this sector. Oil services anyone?

The Deep End of the Retail Pool

If you've followed me for more than a few months, then you know that I have long pounded the table for both Walmart (WMT) , and Kohl's (KSS) for the different ways that they have taken on (or played up to) Darth Amazon (AMZN) , and I have pretty much forsaken the rest of the retailing space. Well, many retailers, in case you haven't noticed, are kind of saving their year in December. The SPDR S&P Retail ETF (XRT) has rallied to the point where that product is now up just a smidge on the year after having been down roughly 14% at one point.

A good time to invest? Perhaps. More likely just a tradeable event. You can see on this chart, below, a dramatic bullish crossover for XRT's daily Moving Average Convergence Divergence just before Black Friday, and a "golden cross" by the 50-day simple moving average over the 200-day SMA just after. So, where is the ugly stick? 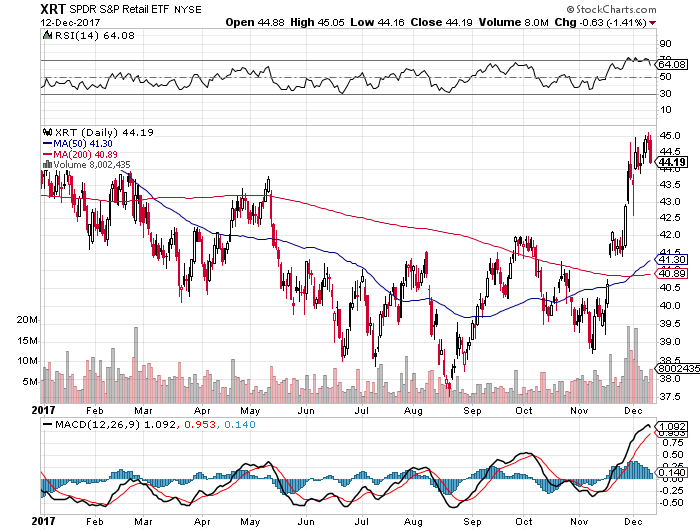 Enough Ugly to Go Around

PetSmart, (not public) reported disappointing numbers earlier this week, adjusted EBITDA came in short of what had been expected, and considerably lower (-34%) year over year. PETM may longer be a publicly traded stock, but the chain is still backed by debt. That debt, due in 2022 and 2025, took a serious trip down a dark and dangerous path in Tuesday trading, which may or may not complicate the company's possible Chewy.com spinoff.

The there'e Sears Holding (SHLD) . Ain't this one a gem? The news here is that the firm was able to reach an agreement with lenders to push terms of $400 million worth of loans from maturing this June out until January 2019. The firm apparently also has an option to extend that maturity by additional six months if need be. LOL.

On top of this, Sears has announced the intention to obtain a credit facility of over $600 million backed by real estate properties. This tranche of dough, if realized, will be used to fund more than $400 million in pension payments, as well as other corporate purposes. The shares fell almost 6% in Tuesday trading to close at $4, and have traded below that level overnight.

For a little background, third-quarter sales at existing Sears stores took a 17% nosedive, and were "outperformed" by the firm's K-mart chain. Existing K-mart stores only saw a 13% decline in Q3 sales.

The future of Sears? The firm says that it continues to explore ways to reduce cash interest payments, and improve flexibility on maturities. Doesn't sound too good to this guy. What downside risk can there be in a $4 stock? Oh, I don't know... maybe about four bucks worth. I am as interested in this one at this discount as I am in a root canal. 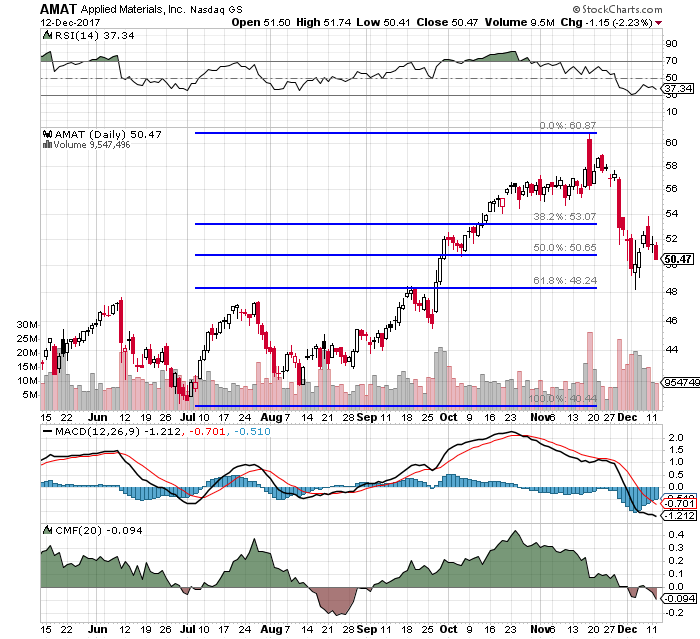 I have done very well in tech this year. There is one name, however, that I had watched and watched, without pulling the trigger. That changed during yesterday's continuation of the on-again, off-again rotation out of tech. In fact, all I bought yesterday were oversold (in my opinion) tech names.

The semiconductors were on sale Tuesday, so why wouldn't I take a swing at a leader in semiconductor equipment.... Applied Materials (AMAT) ? What does this company excel at? The kind of high-performance manufacturing technology that the crowd selling the likes of artificial intelligence and big data need. Yesterday's beat-down left the stock trading at 11x next year's projected earnings. Eleven times!

As you can see, in early December this stock found support just above $48, which also happens to be an almost perfect 61.8% retracement of the July through November rise. I would have liked to have bought it then, but I balked. Not this time.

Relative Strength, the existing MACD environment, and money flow all scream caution, so I am placing a bit of trust in a 12th century Italian mathematician. That said, I am not crazy. Instead of jumping in with both feet, I elbowed my way into this one with about an eighth of my intended long position. My goal would be to add double what I already have on a 48.25 retest, which would still leave plenty of dry powder. I have paid for this expedition by realizing profits in both Lam Research (LRCX) , and Action Alerts PLUS holding Nvidia (NVDA) , and buying back partials in both names, but leaving enough room, so that I do not increase my tech allocation.