On a long-term Point and Figure chart of the iShares MSCI Eurozone ETF (EZU) we can see a breakout over the 2014 zenith.

This represents a major upside breakout from a technical perspective and allows for a much higher potential price projection. However, Point and Figure charts ignore time (and volume) so we need to look at other charts to round out our analysis.

In this daily bar chart of EZU, below, we can see a strong rise over the past 12 months. A gap to the upside in late April adds to the bullish picture. Most of the time EZU has been above the rising 50-day moving average line but lately EZU has traded above and below the line.

The 200-day line has been climbing since early March and is bullish. A bullish golden cross of the 50-day and 200-day averages can be seen back in January. The On-Balance-Volume (OBV) line shows a rise from last December to early October. The OBV line has turned neutral since the beginning of October. The Moving Average Convergence Divergence (MAC) oscillator is hugging the zero line and currently does not indicate much trend strength.

In this weekly bar chart of EZU, below, we can see that prices are above the rising 40-week moving average line. The weekly OBV line has been neutral since May and the weekly MACD oscillator has been weakening since June.

In this long-term Point and Figure chart of EZU, below, we can see a pretty impressive-looking base pattern. Prices broke out over the 2014 peak this June at $41. A long-term potential Point and Figure price target of $72 is shown. 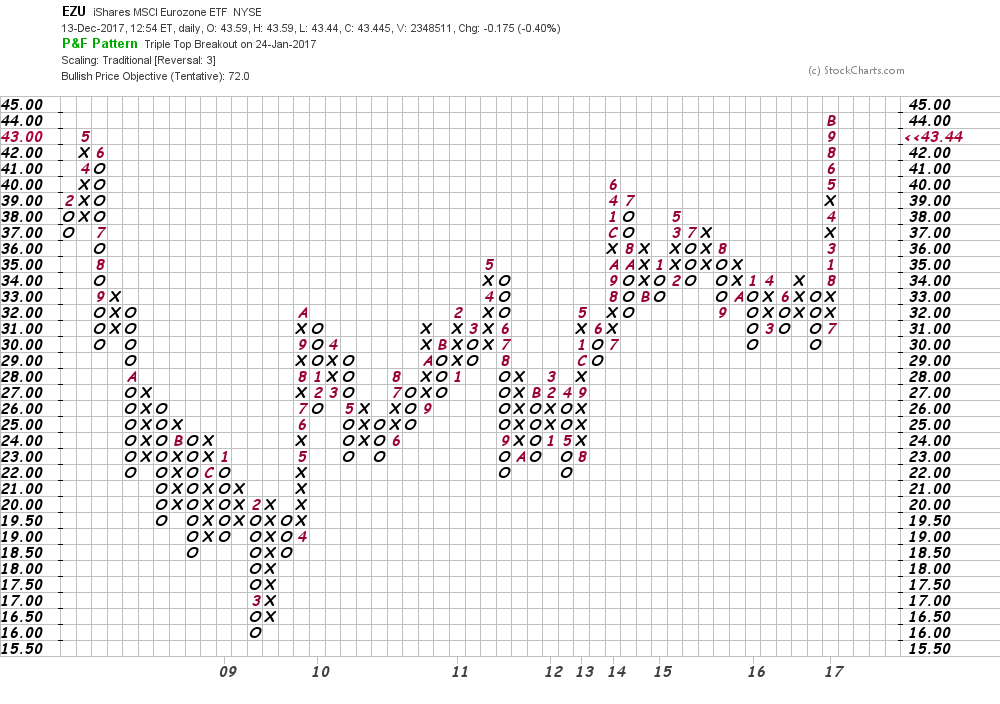 Bottom line: Many investment professionals believe that share prices in Europe could outperform other regions of the world and indeed the EZU has rallied strongly the past two years. In the short run the EZU is likely to trade sideways to correct its overbought condition. Longer-term we have a potential upside price target of around $72.