Biogen  (BIIB) is trading in a rare world of the really high-priced stocks. I don't know how many stocks are trading in the $300s, but I would guess it is a short list. Being a high-priced stock does not mean it is overpriced or overvalued, it just means that buying a round lot gives you a little pause. If you have been considering buying BIIB in the past few months, you may want to hold off a little longer as it looks like sellers are still dominating the price action.

In this daily chart of BIIB, below, we can see two different "phases" for the trading of BIIB in the past year. The first phase is from December to June, where prices traded sideways to lower. The 200-day moving average line is declining in that time frame and the 50-day average is mostly flat.

The On-Balance-Volume (OBV) line rises gradually from January to early June. The second phase of trading, after a sharp advance in July, is from August until now. Prices move sideways with a ceiling around $330 and dips to $280 or so finding buying interest.

Digging deeper, we see that for much of this period the 50-day moving average line is declining, and while the 200-day average is rising, it has been tested in November and December. So far, the 200-day line is acting as support, but the OBV line has worked lower in the past four weeks -- suggesting that sellers have become more aggressive. In the bottom panel is the 12-day momentum study, and it is not showing a bullish divergence.

In this three-year weekly chart of BIIB, above, we can see that BIIB has been testing the rising, 40-week moving average line. The next two panels of this chart are bearish. The weekly OBV line has been declining for two months, and suggests some aggressive selling. The trend-following Moving Average Convergence Divergence (MACD) oscillator is in a bearish mode and pointed down towards the zero line. While not yet at an outright sell signal, the MACD oscillator looks like it is headed in that direction. 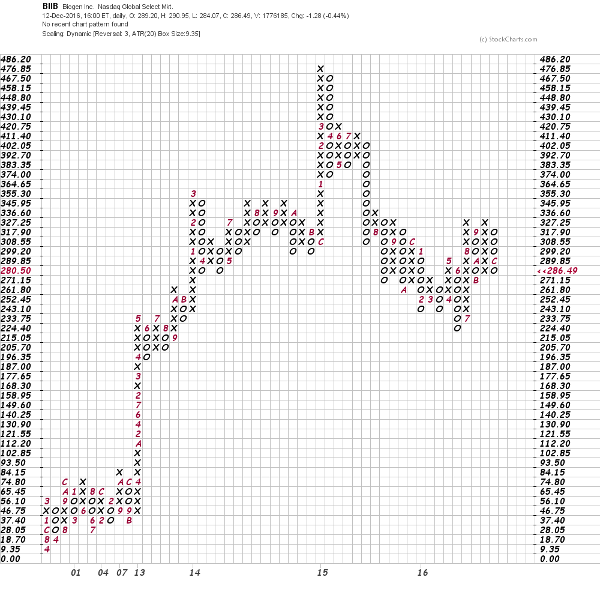 In this Point and Figure chart of BIIB, above, we don't want to focus on potential price targets, but rather what prices might tip the chart up or down. BIIB is in a down column of Os right now. A rally to $336.60 would be needed to make an upside breakout. On the downside, a move to $271 could weaken the chart further.

Bottom line: There are enough technical clues to defer buying BIIB at this time. Shoppers may want to wait until after the holidays to see if they can get a better bargain.

Get an email alert each time I write an article for Real Money. Click the "+Follow" next to my byline to this article.
TAGS: Investing | U.S. Equity | Healthcare | Technology | Markets | Stocks