This commentary originally appeared on Real Money Pro at 9:00 a.m. on Dec. 13. Click here to learn about this dynamic market information service for active traders.

How many times have you been told to allocate investment capital between stocks, bonds and cash? Did you ever question that basic premise rather than simply what percentage of your money should be "at risk" depending on your age and circumstance?

The bar graphs below show the approximate returns on $10,000 for the periods 1946 to 1981 and 1981 through 2015. The latter period covered the most incredible period for bondholders in our lifetimes. Interest rates fell from the mid-double-digits toward zero, thanks to a highly inflated starting point and ending with the Federal Reserve's ZIRP (zero interest rate policies). 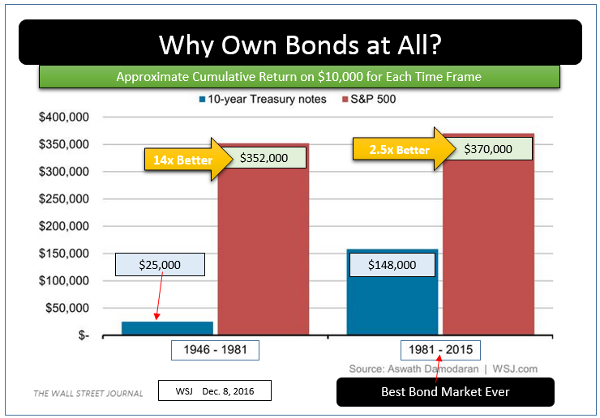 Perhaps you are more than 70 years old and think the previous data didn't apply to your initial circumstance. But the numbers going back to 1926 told the same story.

The 2006-2015 figures include the most severe equity bear market (2008-2009) in decades yet still showed stocks to be far superior to both bonds and cash.

Equities started out 2016 in the worst fashion ever. Many traders sold at bad prices simply to avoid further pain. 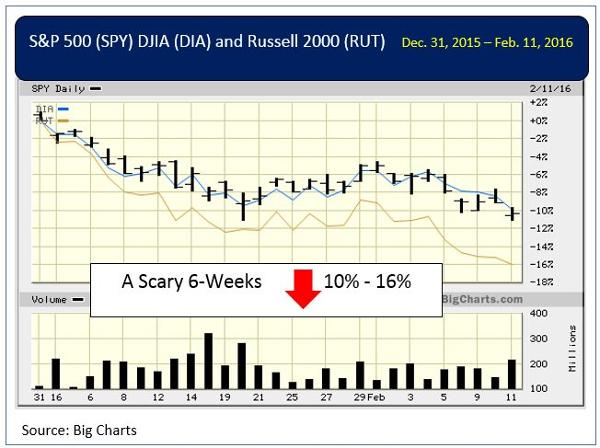 Despite last winter's nervous moments, intrepid investors who simply sat tight were, once again, well rewarded. As of Friday, Dec. 9, the Dow Jones Industrial Average was up more than 13% and the SPDR S&P 500 ETF (SPY) showed an 11.11% gain. Even the lagging tech sector ETF, PowerShares QQQ (QQQ) , was ahead by 6.83%.

The much maligned Russell 2000 small-cap index (RUT) went from worst to first subsequent to the dark days of February. 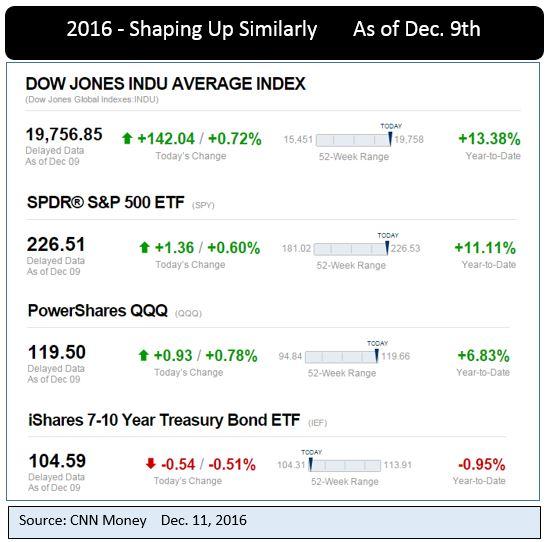 Most fee-based financial planners charge at least 1% annually for recommending you allocate long-term investment capital into segments that are known to underperform over time. Their fees alone could eat up more than 100% of what you can presently earn on money market funds, savings accounts, 90-day government paper and most bank CDs.

With the exception of money you plan to spend over the next few years, there is only one true answer to the question about how long investors' time horizons should extend. We all need to do something with accumulated wealth for the rest of our lives.

Why choose to keep any part of your hard-earned life savings in market segments which have been historically proven to be inferior?

Get an email alert each time I write an article for Real Money. Click the "+Follow" next to my byline to this article.
TAGS: U.S. Equity | Rates and Bonds | Markets | ETFs | Funds | Fixed income | How-to | Mutual Funds | Stocks | Investing

When China Sneezes, the U.S. Will Catch a Cold

The market is all about technicals now. The real buying will only come once the virus is contained or Fed goes all in, as China seems to be willing to do so at all costs.

Where to Put Your Money? Bonds Still Look Good Here

Every minute detail and data point is misinterpreted to paint a positive picture for stocks.

Kraft Heinz, Macy's and Renault have all recently been downgraded, and now the question must be asked: Is this the start of something bigger?

We're also focused on buying bonds that can survive a bad downturn. This gives us a game plan going into a recession.