Cerner (CERN) has broken a key support level on our charts. Is it "done for" or can it make a reversal at this point in time? It is "touch and go" so let's look at the charts and indicators.

In this 12-month daily chart of CERN, below, we can see a significant and hard decline for CERN from early August. In addition to gaping below the declining 50-day and 200-day moving averages in early November and a bearish death cross, CERN has broken key support around $50. More on this support area when we look at the weekly chart.

The volume of trading has been heavy since the gap lower. The daily On-Balance-Volume (OBV) line peaked in August and moved lower until mid-November, suggesting that sellers have been more aggressive. Interestingly, the OBV line has been flat since mid-November even as prices made a new low.

Another potential positive is a bullish divergence between the lower lows in price in November and December and the higher momentum readings. Clearly, the pace of the decline slowed dramatically.

For the longer-term weekly chart of CERN, below, we went back further in time to show why the $50 area is important. There is the low in 2016 and the lows in 2014. The next potential support area on this chart is $45 and then $40.

Currently, CERN is below the declining 40-week moving average line. The weekly OBV line has been down for several months but it is having a small "uptick." The Moving Average Convergence Divergence (MACD) oscillator is in bearish territory and not moving toward a cover shorts buy signal.

In the Point and Figure chart, below, we can see an uninterrupted decline for CERN from $66 to $48. Certainly, prices are oversold and we could see an oversold bounce in the short-run, but that is not a sufficient reason, in my opinion, to go long. 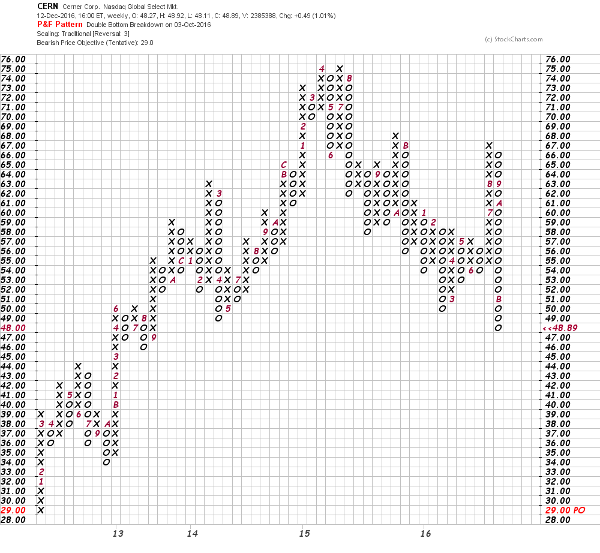 CERN could continue to slide lower or build a base at a level I would not be anticipating. In the meantime I would stand aside.

Charts suggest there could be further downside risk.

Jim Cramer: Let's Give Taiwan a Needed Shot in the Arm

Here's how the U.S. can play a critical part in defending the island from COVID -- and mainland China.

Is Pfizer Ready to Make an Upside Breakout?

Traders could go long PFE at current levels and here's where they can add to longs.

Avoid the long side of GDRX until we see evidence of a durable bottom.