It has been a great year for tech stocks, but not every name has participated. Seagate Technology plc (STX) is a good example of a company that has fallen behind its market peers. Seagate is up a mere 6% this year, while the S&P 500 has more than tripled that figure.

Why has Seagate been a laggard for most of the year? Sales are up at the data storage company, but a drop in the price of storage has caused revenue to decline.

What can the charts tell us about Seagate's next move? Seagate got off to a great start this year, but then the stock collapsed in late April. Since then, Seagate has been in consolidation mode.

Now, that consolidation finally appears to be ending. Seagate is in the midst of a significant breakout (shaded yellow). The stock cleared its 200-day moving average (red) late last week and reached a six-month high yesterday. 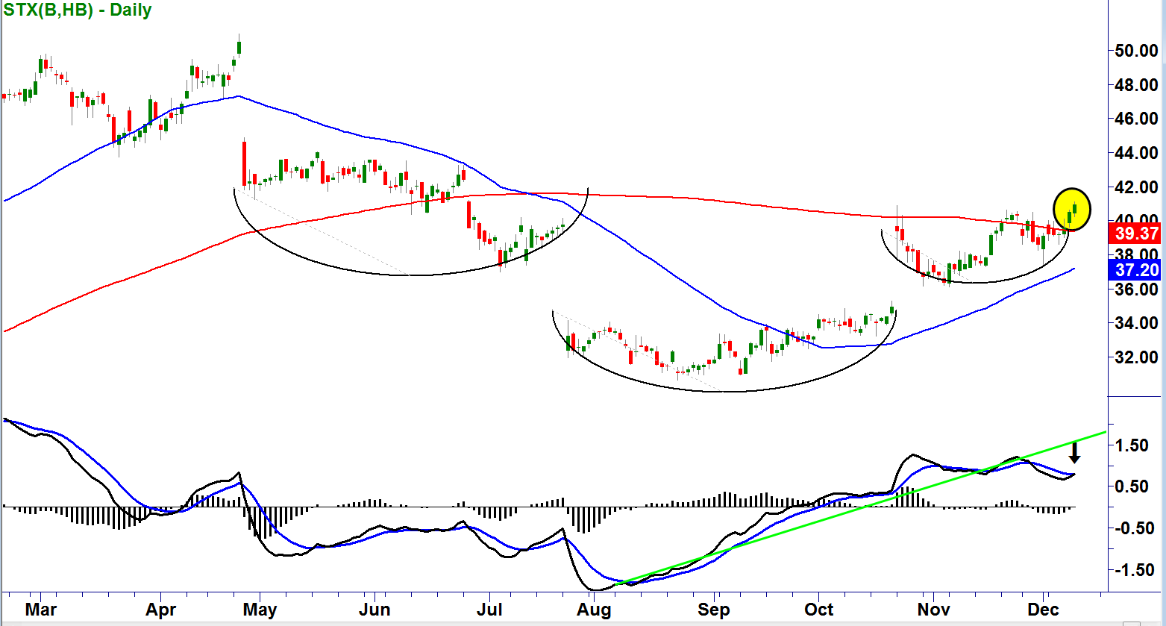 Could this rally continue? According to the chart, it could just be getting started, because Seagate has formed an inverted head-and-shoulders pattern (semicircles). This bullish formation suggests the stock could run all the way to the $48 area.

Seagate's MACD (moving average convergence divergence) indicator also is pointing the way higher (green line). That indicator is on the cusp of a buy signal (arrow).

While Seagate is a tech stock, it also yields a healthy 6.17%. One caveat: When a stock has a high dividend yield paired with shrinking revenue, you must approach it with caution. The ex-dividend date is listed as Dec. 19.

By most fundamental metrics, this stock is inexpensive. Seagate's 12-month trailing price-to-earnings (P/E) ratio is just 15.77, and its forward P/E ratio is just 9.80. Both of these metrics are far below average, indicating the stock is undervalued.

Perhaps most impressive is the stock's PEG (price to earnings over growth) ratio, which is a mere 0.54. A PEG ratio of 1 is considered fairly valued, and anything below 1 is considered undervalued. Currently, only 30 stocks on the S&P 500 have a PEG ratio of less than 1.

My game plan is to buy Seagate here and to close half the trade at about $43, as there is a ton of resistance in that area left over from May/June. Then we'll raise the stop and try to reach $48 with the remaining half, and hopefully collect a substantial dividend along the way.