"Know thy self, know thy enemy. A thousand battles, a thousand victories." -- Sun Tzu

The Sands Of Time

I sit in front of my computer early Tuesday, as time passes. I do my best thinking at zero dark thirty. Always have. Probably always will. Today, I am thinking about what good folks need to read on Tuesday morning as they face the obstacles of the day. What will actually help? Oh, I could write another article about Bitcoin or Bitcoin futures. That does nothing for most people, and might just bore most of my audience half to death. We could discuss tax reform, and we will. That will impact all of us. Same goes for the Fed. You know, maybe I should just tell you what I think. That always seems the best way to engage with all of you anyway. That's just what we'll do. Ready. Set. Go.

You Gonna Tape on the Foil?

As 2017 begins to wind down, thoughts cross my mind, probably many minds across the financial universe. "OK, don't get crazy, don't screw up a pretty good year in December. Play it close to the vest, Sarge". Then other voices enter the brain. "Playing careful is how you get hurt." Maybe that's just because you've changed your behavior. I fault no trader who shuts it down early, but if one shows up to play this sport, then best to go about business as usual. Play the game like you mean it.

We have some tailwinds, gang, as 2017 winds down. Never mind that conditions will evolve and might not produce the same kind of results that we have seen in recent years. Of course, the field we take will change. We will still take that field expecting to win.

1) The U.S. economy. The growth has improved and is still improving. Tax cuts, and the potential for an infrastructure build as well as increased defense spending, are positives here. Maybe not on the deficit side, but we are discussing equities today.

1) The rest of the world is growing even faster than the U.S.

2) This will, for now, sustain demand for U.S. multinationals....

3) ... Especially while the U.S. dollar remains weak. Rock and Roll.

1) Wage Growth. You would think that at some point in 2018, if headline unemployment tests the 4% level, then the participation rate may re-test the 63% level. This will finally increase demand for labor, particularly for middle managers. That will provide wage growth, and with it, some consumer level inflation.

2) The Balance Sheet. Humming along in the background, right? Is that not how the planned roll-off is supposed to work? Now, picture this. The Fed continues to raise the fed funds rate. The Fed continues to whittle down said balance sheet. These facts of life have kicked off somewhat painlessly, as long as the ECB and BOJ continue to devour the long end of the yield curve. What if?

2a) Other Central Banks. What if the ECB continues to taper its monthly quantitative easing purchases, allowing interest rates to budge? What if the BOJ allows their target for the 10- year bond to move off zero? They are both past due.

2b) Different Ballpark. Different Conditions. Does this finally tighten monetary conditions? That is the change. Is that really what the Fed wants?

The way I see it, S&P 500 aggregate earnings for 2018 are projected somewhere in the neighborhood of $146. They say you can slap about $1.40 on to that number for every percentage point that the headline corporate tax rate drops. The S&P 500 is already trading at 19 times next year's projected earnings. The Russell 2000 is even more highly priced, at 20 times.

Now, we have established, we think, the potential for higher earnings. I mean, if we get carried away and nobody stupid nukes anybody else, this could put S&P 500 earnings well above $160. Wouldn't that just be a hoot? Hold on. It will not be as easy as throwing money at a dart board, gang. Now, for the sobering part. As monetary conditions tighten, (domestically as well as globally), PE ratios will be forced to contract. Less liquidity.

Now, think of all of the analysts over the past few years who told you stocks were overvalued by historical measures. Well, duh. We weren't trading these names under historical conditions, were we? As those conditions return to something closer to what those of us older than dirt consider normal, so will equity valuations. (Wasn't that easy?). Increased earnings versus decreased valuations. Know what? Stocks will still be the place to go, over other asset types, but price discovery will regain some importance at the point of sale.

What to Make of Small-Caps

As mentioned above, the Russell 2000 broadly trades at a higher valuation than the S&P 500, based on next year's projected earnings. Small companies have often been named as the group that would benefit the most from the tax reform plan that now seems so close, yet so far. These companies are almost purely domestic in nature, however. This means that in a weaker dollar environment, sales are not positively impacted in the ways that they might be for larger firms.

Many smaller firms are also struggling with higher debt levels than are their multinational counterparts. Normalized monetary conditions mean higher interest rates. This will clearly injure firms reliant upon external help to grow, or worse, just to survive. Then there will be the deductibility of debt interest to deal with. That little slice of pain is limited in both the House and the Senate tax reform plans, and that does not help smaller businesses, either.

Chart of the Day: NXP Semiconductor

This is fun, gang. This is exactly the kind of stuff that makes financial junkies like myself take notice, and then maybe take action. On the chart of NXP Semiconductor (NXPI) , you can see the violently bullish moving average convergence divergence (MACD) crossover. You can also see the return to favor made by the firm's Relative Strength. Money flow still rots. Booo. Oh well, can't have everything. You may also notice that the stock price has been repelled at a 61.8% re-tracement of this issue's November swoon.

That would be important if the firm's playing field had not just been substantially altered. Consider that more than a year ago, NXP Semiconductor had agreed to sell the shop to Qualcomm (QCOM) for $110 a share. Enter the Dragon. No, I mean enter activist investor firm Elliot Management. That operation released a letter on Monday that made the case that a (much) higher valuation should be made for NXPI, perhaps the industry norm of 18.6 times earnings. Currently the $110 take-out price comes to just 16 times. A valuation in line with NXPI's peers would place the equity price at something like $135. 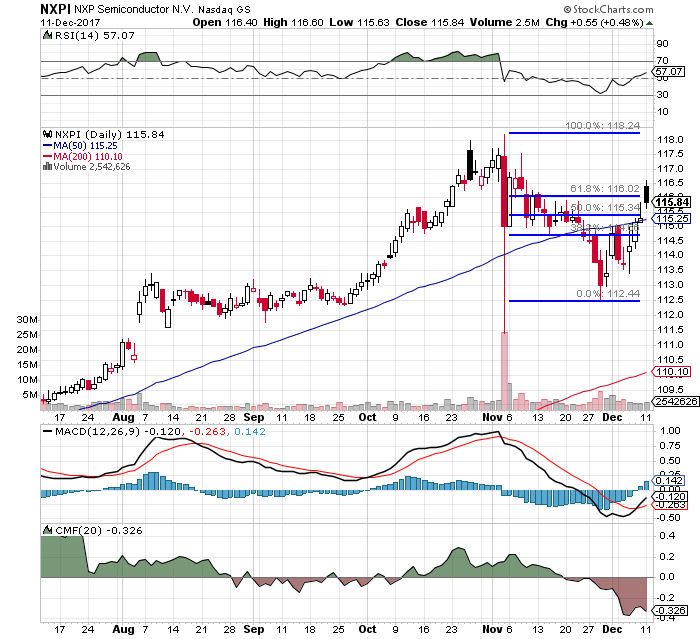 The story is highly complicated from here. QCOM obviously feels that last year's price for NXP Semiconductor -- which, by the way, is held in the Action Alerts PLUS charity portfolio that Jim Cramer co-manages -- is fair. Regulatory hurdles to the deal are expected to clear either later this month or early next year (more likely). Then there's the fact that Broadcom (AVGO) has made QCOM the target of an attempted hostile takeover. Is NXPI a good deal for the investor at the last sale? My guess is that any risk is currently to the upside, even if the firm should be left to stand alone. I am long the shares.

Get an email alert each time I write an article for Real Money. Click the "+Follow" next to my byline to this article.
TAGS: Investing | U.S. Equity | Financial Services | Technology | Economic Data | Markets | Economy | Interest Rates | How-to | Risk Management | Stocks