It is a lackluster day that isn't offering much opportunity for the bulls, but there isn't much concern about it so far. Market players are taking it in stride and aren't in a big rush to hit the exits. If we close near the lows of the day that may cause some concern, but this is nothing other than a pause so far.

We've enjoyed a classic V-shaped move since the election like we have so many times since the days of the Great Recession. These V-shaped moves eventually do come to an end, but how does the process take place? What are the signs that a short-term top may be forming?

Typically, what we see is stalling action. The indices don't just turn around and go straight down. There may be a few minor days of selling first, but no real movement in the indices. This leads to more aggressive selling, but the first round of selling may produce a bounce, then more stalling before another round of selling occurs.

It is the process of stalling and failed bounces that produces the topping action.

Let's take a look at what happened last in 2015, which eventually set up some very poor action in January and February 2016. As you can see, there were three periods of stalling and two dips that were bought before the collapse in January. This is how tops tend to play out. They are a process that takes time. The action today may be a first step, but there is a long way to go before we should be concerned. 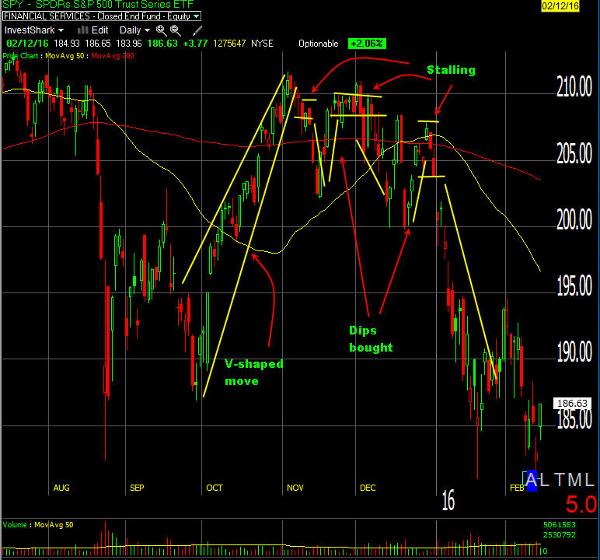