AMC Networks (AMCX) has put out some fantastic shows over the past few years. Breaking Bad, Mad Men and The Walking Dead lead the list. Unfortunately, the channel's original content is feeling more like the last one in the list of three rather than the first.

Admittedly, I'm more a fan of the graphic novel than the show, but even the most loyal TWD fans I know are starting to question whether the show is just dead now. As for the spinoff prequel, I don't know any viewers personally who are still with that show. Things aren't completely dried up as Better Call Saul is solid and Into the Badlands has potential, but the bigger issue here is the top three are dead or rotting ... kinda like the stock.

Often, a trader or investor's initial reaction to a stock that's been cut by a third is that it has come down enough already or it's too late to look for a move lower. While it's a simple notion, I tend to disagree. Last year, Bob Byrne and I dissected stocks above and below their 50-day simple moving average (SMA) when examining large moves. Specifically, we were looking for large moves lower. The results of such led us to one simple conclusion: Bad things happen under the 50 day SMA. AMCX is some $9+ below its 50-day SMA. 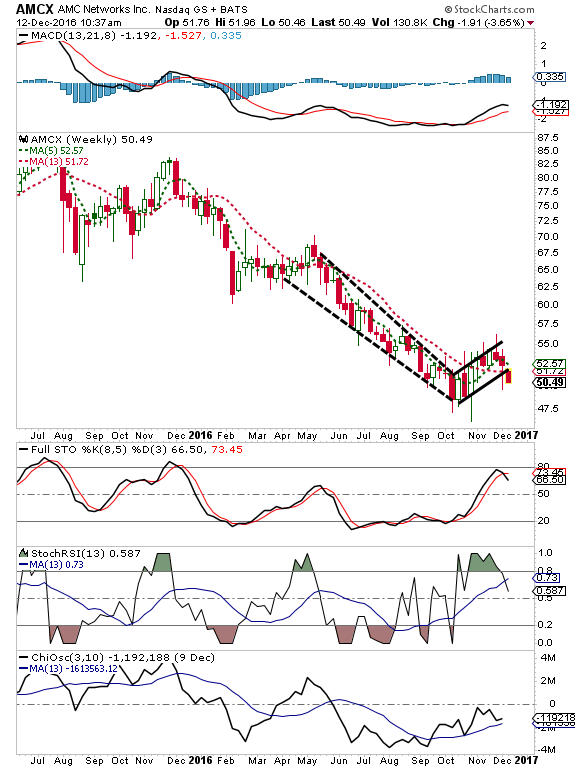 Technically, the stock appears to be in trouble longer-term as well. Price has broken below a bear flag. This is troublesome as the path lower was quite long and a break of the October closing lows puts a $40 target into play. Furthermore, we see a bearish crossover in the Full Stochastics and StochRSI, so all trending higher is lost and I'd anticipate the same will happen with momentum quickly.

If this is a name you own, then I would be aggressive hedging additional downside. If I were already long in the media and entertainment category, this might be a short I use to cut exposure. If I were looking for a short play in this market, AMCX would be one closer to the top of my list and definitely on any short list I held. Only a weekly close above $56 would place me neutral and I wouldn't look bullish until the stock is trading back over its 50-day SMA.

Get an email alert each time I write an article for Real Money. Click the "+Follow" next to my byline to this article.
TAGS: Investing | U.S. Equity | Consumer Discretionary | Options | Short-selling