AbbVie (ABBV) sold off ahead of the U. S. presidential election but has had some rapid moves up and down since. Prices have consolidated in a $58-$62 range recently, poised for its next move. Overall, the next move for ABBV looks like it will be to the upside, but let's check further.

In this 12-month daily chart of ABBV, below, we can see a $58 to $68 trading range for much of the year. In late October, ABBV gaped lower, temporarily breaking below the lower end of the trading range. Prices found support around $56 instead of starting a leg lower, but quickly popped back up to $65 before settling into a tighter range.

ABBV has been above and below the 50-day and 200-day moving averages the past 12 months but right now is above the declining 50-day and rising 200-day averages. The daily On-Balance-Volume (OBV) line moved lower with prices in August through early November. From early November to now the OBV line has been moving sideways.

The Moving Average Convergence Divergence (MACD) oscillator generated a cover shorts buy signal in early November and has returned to the zero line. A push above the zero line would be an outright go long signal.

In this three-year weekly chart of ABBV, below, we have mixed technical signals. Prices have closed right on the rising 40-week moving average line. The weekly OBV line is still pointed down and suggests that sellers have been more aggressive since August. The weekly MACD oscillator is below the zero line so if it continues to narrow to a crossover it will be a cover shorts buy signal.

In this Point and Figure chart of ABBV, below, we get a different perspective on the price action. Here we can see a longer-term uptrend. A rally to $63.57 is needed now to turn this chart positive with a new column of Xs. A rally to $68.46 would make a new high on the chart and this would be a significant breakout. 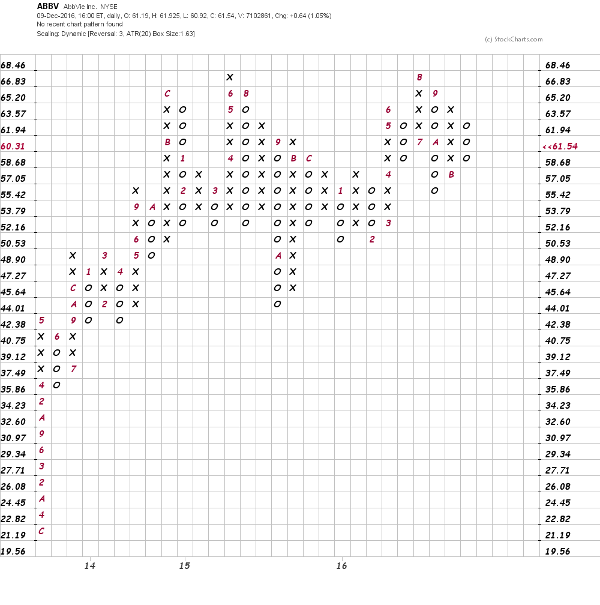