"Let us not bankrupt our todays by paying interest on the regrets of yesterday and by borrowing in advance the troubles of tomorrow." -- Ralph W. Sockman

A new game in town? Friday's November jobs report was good. Not great, but good enough for the Federal Reserve to stay on mission. Even with that policy decision to be made this week by the central bank, even with a fair amount of high-impact types of macroeconomic events scheduled for release later this week. Even as Congress tries this week to mesh the two existing versions of a tax reform bill into one that they could vote on... I know what you woke up wanting to ask. How did the birth of Bitcoin futures trading go this weekend?

The answer, for fans of Bitcoin, would be that the launch of Bitcoin futures trading on CBOE under the symbol XBT at 6pm ET last night went very well. As I sit here banging out this note in zero dark hours of Monday morning, Bitcoin itself is trading close to $16,700. Futures contracts expiring this January have traded as high as $18,800, and futures expiring in March went as high as $19,100. Of course, all of these numbers could change greatly by the time you are reading this. Heck, these numbers can change in a matter of minutes.

How did the existing systems hold up? Well, the CBOE's website experienced some issues unrelated to trading, as curiosity seekers rushed to the site. Other than that, there were two volatility halts overnight at planned circuit breakers in the event of a 10% and a 20% increase in price. The CBOE is the first to market on Bitcoin futures. The CME will also step to the plate in this market next week. By the way, these futures are now being settled in cash, and will be so in the future. U.S. cash. There is no actual Bitcoins involved in the trading of Bitcoin futures. Bet some of you wondered about that.

Will the trading of these futures lead to improved price discovery? Good question. Difficult question. Speaking as a trader, I would be slow to get on the short side of such a beast until I see a stabilized marketplace. I may not see the apparently obvious value in the underlying "commodity", but I do like to claim some situational awareness. It's plain to see that others do, and I'm not one to walk straight into a buzz-saw. Margin requirements will slow down any charge into this product, as well. The CBOE is currently requiring traders put up 44% of the daily settlement price. When the CME kicks it into gear next week, they are said to be planning a 35% margin. For those who do not closely follow futures markets, 10% of total value might be considered normal for more liquid contracts.

Get fired up? The White House is apparently set to dish out the president's infrastructure proposal sometime in January. Remember the $1.0 trillion infrastructure build that was part of the president's campaign, and then his original agenda upon election? Well, the plan is still on, to some degree, in a roundabout way. Though to be quite honest, I don't know how this will fit into a 2018 federal budget, if they actually do somehow get a tax reform bill that increases deficit spending on its own merits passed into law.

President Trump still wants to upgrade roads, bridges, tunnels, airports, and rail systems across the country. The rush, as 2018 is a mid-term election year, will be to get a detailed plan out to the public prior to the State of the Union address on Jan. 30. This way, the plan can already be in the news cycle at that time. Will there be support for such a plan? Yes and no. Polls do show that rebuilding the nation's infrastructure plays well on both sides of the aisle. That probably is at least somewhat before folks consider paying for it.

The plan, or what we know about it, is that it will propose something a lot more complex than raising a trillion dollars and throwing it at a wall. This White House plan, if the president gets on board with it, calls for the federal government to spend $200 billion over 10 years. This spending would be splintered into block grants for rural communities. Lending programs, transformational (innovative) work, and cash for the states. The intent will be to incentivize the states, their localities, and private businesses to spend another $800 billion over the same decade. What could go wrong? Surely, there will be resistance by most involved at some point. Nobody likes to spend money on anything that does not show an immediate and overt return. Why do you think our infrastructure is, broadly, in the shape that it is?

Clearly, the path to increased spending in a previously ignored (one might even say abused) area will lead to a reduction of spending in others. Depending on what is drawn from where, there will be opposition. Everything has an ally somewhere, and that will include not just Democrats, but Republicans as well. There are two ways that the federal government could go about trying to drag in some revenue so that they can foot part of the bill for an infrastructure build.

The first has been widely discussed, and that is a national gasoline tax. Twenty-six states have already "gone down this road" in the last five years, while just last month voters in many of those same states approved funding for state level infrastructure projects. In any incentivization program, those sates will need to have their "proactive" efforts, somehow banked so that they are not penalized for not creating new plans once any federal spending is announced.

Do You Really Need to Play This Game?

I think any plan to improve the nation's infrastructure will hit a lot of brick walls. I would not get overly fired up about heading down that road, though I would not leave myself completely unexposed. You have all seen the materials sector get suddenly hot after what had been a cold snap in response to this story's re-entry into the news cycle. Keep your eyes on Summit Materials (SUM) and Martin Marrietta (MLM) as infrastructure type plays. Vulcan Materials (VMC) seems to be the name that many are discussing, but that stock does trade at 30 times next year's projected earnings, which is a little rich for me, especially if this proposal falls flat on its face.

I like United Rentals (URI) . These guys rent out heavy equipment. I am long this name, getting in later than many, as part of my portfolio's response to the spate of hurricanes that hit the U.S. in late summer. Even with my late entry, I have seen a 28% gain in this name, and even at this last sale ($164), the stock trades at just 13 times forward earnings. The negatives? There is no dividend, and the company has a lot of debt to contend with. Their quick, and even current ratios (which measure how many times current assets cover current liabilities) languish below 1.0, which is something I never like to see. If you are already long this one, you may want to play this game with a trailing stop, just to protect yourself in the event of a sideways-to-lower market reaction to the president's plan. There was one more name that I like, and missed. Maybe I'll get another chance.

Chart of the Day: U.S. Concrete

I like U.S. Concrete (USCR) . On Friday, this name ran 3.8%. I missed it, but that does not mean that the name falls out of my peripheral vision. We are talking about a firm here that is expected by analysts to show significant growth in both EPS terms as well as revenue, with or without a federal infrastructure build. The stock trades, even after last week's run, at just 17 times forward-looking earnings, and sports both quick and current ratios above 2, implying that at least for now, its debt levels will not be sneaking up on the company.

As you can see, money flow has been strong for two months, and really almost since mid-June. Still, until very recently, the stock traded sideways. The moving average convergence divergence (MACD) is emitting strong short-term signals, and relative strength is now approaching a short-term overbought condition.

You can see, painted by the red Fibonacci levels, that the $70 level has performed marvelously as support for this name, should there be a blood-letting as the news cycle evolves. That said, as someone who missed the move and would like to initiate a limited long position, given a chance, I would likely act if I were to see prices close to $78 by New Year's Day. 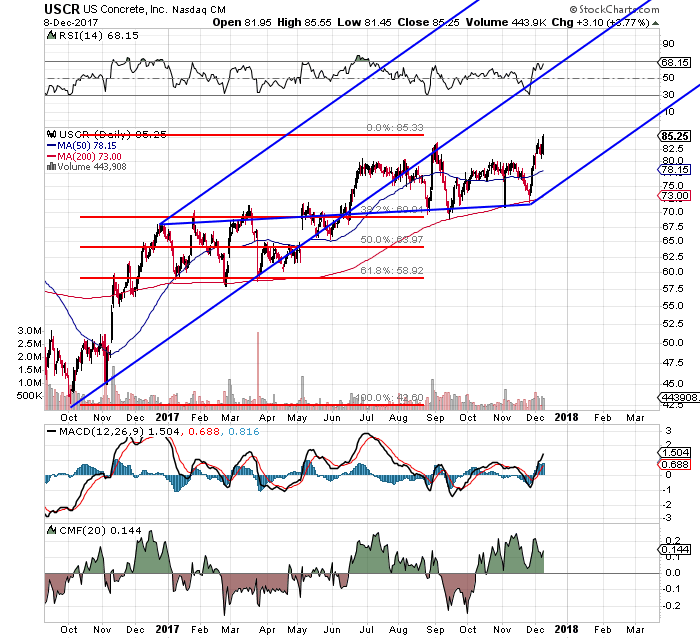 Potential first-line support in that spot can be projected through the blue pitchfork model, and currently backed up by the 50-day simple moving average (SMA). Short to medium-term performance will clearly be driven by the evolution of the news cycle for this name. I will not be getting too aggressive upon entry, not only for that reason, but also that would violate one of my core disciplines. Carry on.

Get an email alert each time I write an article for Real Money. Click the "+Follow" next to my byline to this article.
TAGS: Investing | U.S. Equity | Basic Materials | Industrials | Futures | Currencies | Markets | FOREX | How-to | IPOs | Risk Management | Short-selling | Stocks