Amazon's  (AMZN) stock is up an astounding 51,000% from its May 15, 1997 IPO share price, and yet its shares still have the potential to almost triple from here, according to longtime internet analyst Mark Mahaney.

All it would take is for its current breakout businesses -- e-commerce and cloud services -- to keep growing as fast and to remain as profitable as they have been, and for several of its other big bets to pay off, said the RBC analyst at Business Insider's annual Ignition conference this week.

Amazon's retail business has had 20% organic growth for 23 of the last 24 quarters, Mahaney noted, and if that rate continues through 2021, its retail revenues would hit $311 billion. Of course, as a given business gets larger, it becomes more difficult for it to keep growing as quickly, but working in Amazon's favor is the fact that online retail still only accounts for about 10% of all retail sales, meaning there's still significant room for growth (Mahaney pegged the size of the entire retail market at $21 trillion).

Meanwhile, if Amazon Web Services can continue to grow at a 40% annual clip through 2021, it would be a $65 billion business by then. Working in Amazon's favor here is the fact that adoption of cloud services by businesses is still very early, with Mahaney estimating that only about 5% to 10% of companies are currently using them, and AWS is well ahead of its rivals such as Alphabet's  (GOOGL) Google, Microsoft  (MSFT) and VMware (VMW) .

Amazon's long-term operating margins in retail are about 10% and for AWS, they're a stunning 40%. If the company can maintain those, its net income after 30% taxes in 2021 would be about $40 billion, and given a price-to-earnings multiple of 25x, that translates to a share price of $2,054 -- close to three times its current $767 share price - and a market cap of $996 billion.

Here's a summary of Mahaney's calculations and projections (his entire deck can be found here): 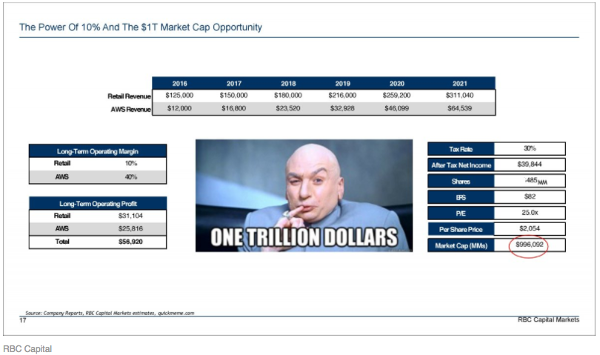 Another key assumption for Mahaney's bull case is that at least a few of Amazon's big bets on large new markets eventually start to pay off, as Amazon Web Services did.

Here Mahaney lists the most promising as business supplies (Amazon Business Supplies already has 300,000 customers), groceries (a huge total addressable market and a business that requires plenty of the logistics expertise that is Amazon's strong suit), shipping and logistics (Mahaney thinks it's a certainty that Amazon will offer its shipping services to other companies and eventually compete with UPS  (UPS) and FedEx (FDX) ), video (Prime Video is becoming a major reason for customers to subscribe to Prime) and Alexa/Echo voice services (Mahaney calls the Echo Amazon's 'trojan horse into the fridge and pantry' that will likely be the biggest-selling product of the holidays).

Investors have started to give Amazon and its CEO Jeff Bezos the benefit of the doubt when it comes to its continual, massive investments in new businesses, and resulting lack of quarterly profits at times. And as an illustration of just how out-of-the-box Bezos and his fellow executives are thinking, Mahaney acknowledged that he himself thought Amazon getting into cloud services was a bad idea when it launched about 10 years ago.

Get an email alert each time I write an article for Real Money. Click the "+Follow" next to my byline to this article.
TAGS: Investing | U.S. Equity | Technology | E-Commerce