I did not like the price action and indicators on Dollar General (DG) back in March, and wrote that, "I am torn between the neutral daily OBV line and the bearish weekly OBV line. But with the bearish moving averages, I have to side with the bears. I would refrain from the long side of DG as a breakdown of the $69-$68 area should precipitate further losses."

DG retested the $68 area a number of times in early April but the stock refused to break lower. There was a bounce higher in late May that fizzled and by early July prices were again in position to retest the $68 level again. Once again prices held and a sustained advance got underway.

In this daily bar chart of DG, below, we can see how the rally unfolded over the summer months. DG rallied above the rising 50-day and 200-day moving average line. The 50-day line closed above the 200-day line in early September for a bullish golden cross. The 50-day line was successfully retested in early November. A rising On-Balance-Volume (OBV) line can be seen since early September and tells us that buyers of DG have finally turned more aggressive. The trend-following Moving Average Convergence Divergence (MACD) oscillator turned up above the zero line in late July and remains in a bullish configuration.

In this weekly bar chart of DG, below, we can see that prices have rallied to challenge/retest the 2016 zenith. Prices are above the rising 40-week moving average line. The weekly OBV line has been rising since June and suggests strong buying and accumulation. The MACD oscillator is bullish on this timeframe.

In this Point and Figure chart of DG, below, we can see that prices broke out on the upside at $85.59 and that a $94.37 price target was reached and exceeded. 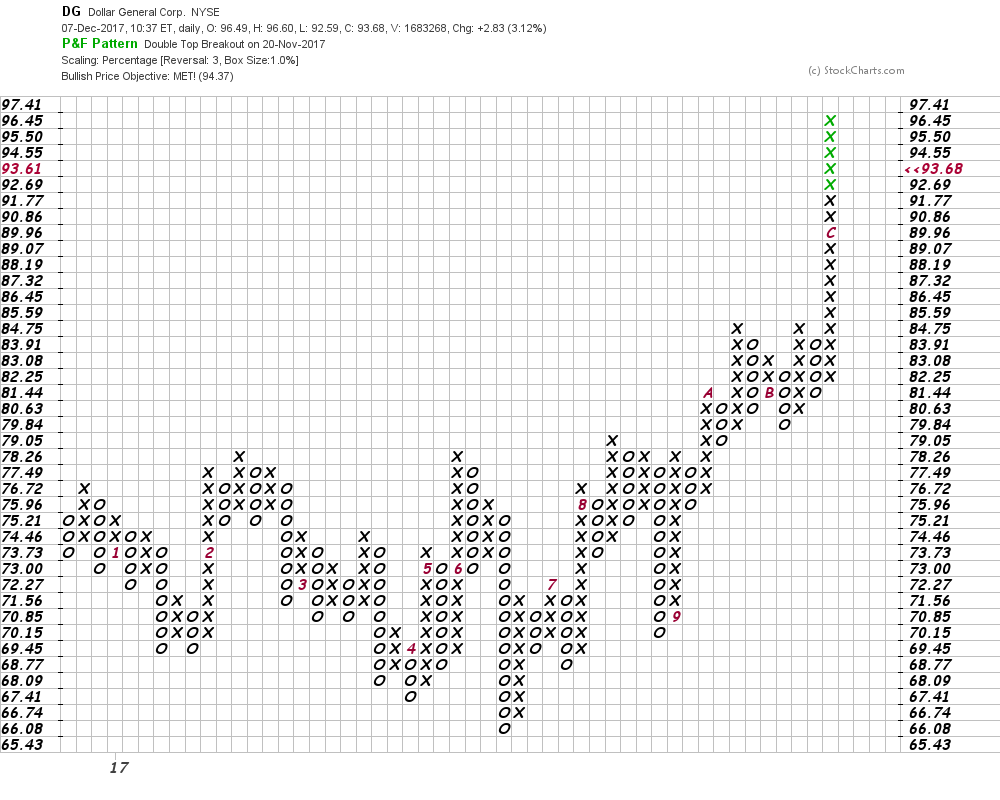 Bottom line: The price of DG has become a bit extended since early November so a sideways move or even a small downward correction would not be out of the ordinary. Traders and investors should use a shallow correction to probe the long side anticipating longer-term gains to the $120 area. A close below $86 would be my risk point.