On this day in 1941, Imperial Japanese naval and air forces attacked the U.S. naval base at Honolulu, Hawaii, prior to delivering a declaration of war. Four U.S. battleships were sunk and four others were damaged. The U.S. lost 188 military aircraft, while 159 others were damaged; 2,403 U.S. service members were killed in action that day, while another 1,178 were wounded. My bet is that you did not know that Canada declared war on Japan that same day in response, even before the United States did the next day. A battle had been lost. A beast had been awakened.

As I stare at all of my screens this morning, one item makes me stop and check other sources to verify its authenticity. That item is not a commodity, not really a security, and only maybe might be considered money by the accepted definition: Bitcoin. Twenty-four hours ago, we were amazed that this "product" was trading at more than $12,000 to the U.S. dollar. This morning, the last sale that I see, which will surely change wildly by the time I hit send, is above $14,600. Just incredible. In fact, Bitcoin has gained a rough 10% against the greenback in the last seven hours.

Last week, I wrote on Bitcoin. I was negative -- not extremely so, but I did state the case that as is, the crypto-currency was not for me. I also relayed my feeling that the central banks controlling the planet's reserve currencies would eventually consider Bitcoin, or any leading digital-type currency, to be competition for power over planetary wealth. I would prefer to wait until derivative products trade on a well-regulated exchange before risking my own wealth. Obviously, there are many who disagree. Suitability would be an issue, I think, for many.

Bitcoin, where it now stands in terms of market cap, is larger than 97% of the firms in the S&P 500. I can easily see the value in blockchain technology. That, to me, could be where there is a real change in the way that trust-based businesses are conducted, and could be as revolutionary by itself as, say, manned flight, or maybe air conditioning. I still think the inventions of the wheel and antibiotics rank as numbers one and two, mind you. All kidding aside, my point is that this technology could be one of those 90-degree turns that leaves people wondering how folks ever got by in the "early days".

In the meantime, I wonder what the interest in Bitcoin is drawing value away from? There has always been a slice of the investment community that held an interest in non-national alternative currency. Prior to now, those folks were called gold bugs. Is it the same mindset that seeks Bitcoin, but merely a generational shift? In the event that the lights go out, physical gold is still physical gold, so this is not apples to apples. But I bet the 60-year-old gold enthusiast and the 25 years old crypto-currency enthusiast share some personality traits. Though the Bitcoin topic does seem to drive more hate-mail than any other topic that I write on, I would love to hear from the readership. Do you have an opinion on this comparison? That interests me very much.

Should the House of Representatives and the Senate successfully mesh their tax reform bills and actually greatly reduce corporate tax rates, what then? U.S. households are expected to save an average of $1,200 in 2019. That is after considering the overall higher tax rates that will be imposed upon folks living in the highly populated blue states that will likely see their individual tax returns lose the full deductibility of said state and local taxes.

What I am getting at here is: what if the changes in the fiscal environment succeed in pushing out the long end of the curve, succeed in weakening the dollar, and in turn succeed in creating significant inflation? What does Jay Powell do then? Is it fair to say at this time, when the economy is clearly growing and financial markets seem to be adding to a public "wealth effect", that inflation might spike unexpectedly? The Federal Reserve could fight any unexpected move here by raising interest rates, right? Hmm. An increase in the fed funds rate is already penciled in for next week. The markets also seem to be pricing in the next hike after that in March. Right now, futures markets say that there is a fair chance at a third increase from today's level in June.

I'm not saying that this can't be done. I am saying that this is a narrow path we walk. Raising rates as aggressively as we now seem poised to do, while winding down the balance sheet in the background like we are should have a suppressive impact upon inflation. This monetary environment will have to co-exist with a stimulative fiscal environment, should tax revenue decrease while government spending (obviously at a greater deficit) increases. Now, think about Jay Powell, incoming Fed Chair. Has any other incoming Fed Chair had to simultaneously think about preventing the economy from "overheating", and from falling into recession, and have to walk that tightrope, while trying to normalize what can only be seen as prolonged perverse monetary conditions? He may be in a tougher spot than anyone realizes.

On Wednesday, we dug into the possible impact of the corporate alternative minimum tax. We know that the House version of the tax reform bill had repealed this tax. Different story in the Senate. In an effort to please everyone and show some revenue, the Senate left this provision in place in a last-minute change before voting on their bill Saturday morning.

As a reminder, the corporate AMT is meant to force corporations with very low effective tax rates to pay a minimum of 20%. Many tech companies do not. One big reason that they do not, besides leaving cash outside of U.S. borders, are tax credits that these kinds of firms can claim for research and development. We are talking hundreds of millions of dollars. This gave Senators a rough $40 billion to play with over a decade on the revenue side -- at least in their thinking. A corporate AMT that enforces a 20% minimum (which would also be the headline corporate tax rate), would force this kind of tax credit into extinction, and perhaps end up actually raising federal taxes on many of these tech firms.

One such firm would be Apple. According to data I've seen over the last few days, Apple sees an annual tax benefit from research and development of roughly $678 million. This benefit for Apple would easily be the largest of any U.S. firm. Alphabet (GOOGL) would be number two, and their benefit is less than $500 million. Forcing this minimum 20% tax on Apple, effectively removing this R&D benefit, would be a drag, you might think, on valuations (currently less than 14 times forward PE) for this greatest (in my opinion) consumer electronics company of all time.

Then there's Broadcom (AVGO) . Thursday night that firm, a supplier to Apple, reported earnings. AVGO beat expectations for both earnings per share and revenue. It raised the dividend. It raised first-quarter guidance and long-term free cash flow targets. Wow. This would perhaps also imply that the next quarter for AAPL might look pretty neat.

Wait. There's more. Did you see the article banging around the Financial Times that explains the benefit that Apple might see from the repatriation of funds? No? Apple has stashed $252 billion in cash and investments outside of U.S. borders. To put this in perspective, Microsoft MSFT is second, with $132 billion, so we're talking about a lot of dough. The Financial Times article estimates that if AAPL had tried to bring that cash home right now, the tax bill would come to $78.6 billion, but at 14.5%, the bill comes to $31.4 billion for a benefit of $47.2 billion. Higher dividends? Increased buybacks? Enough dough to pay for research and development, even if a corporate AMT is left in place? All of the above?

Chart of the Day (Another Look at AAPL)

Back in mid-October, I went deep on Apple (AAPL) in this space. I put a $176 price target on the name at that time, which I re-iterated at the Cramer Teach-In event. My panic point at that time was $141. Upon earnings, the stock ramped higher and actually hit $176. I sold half of my long position there at that time. I then pointed toward my aggressive secondary target of $197. The second leg of this journey has not progressed as triumphantly as the first. Thankfully, we reduced principal in the name through living by our disciplined approach to trading at that time. Now, it's time to take another look and see what we should adjust.

Still using election night 2016 as our starting point, we'll use the same approach that we used back in October. The first thing that strikes me is that, while relative strength has waned over the past month, a bearish-looking moving average convergence divergence (MACD) crossover event roughly three weeks ago still leaves both the 12-day and 26-day exponential moving averages (EMAs) above the zero line, and well above the nine-day EMA. That's positive. Money flow is also surprisingly strong over two months for a name that saw its equity valuation run sideways and then lower over much of that time. 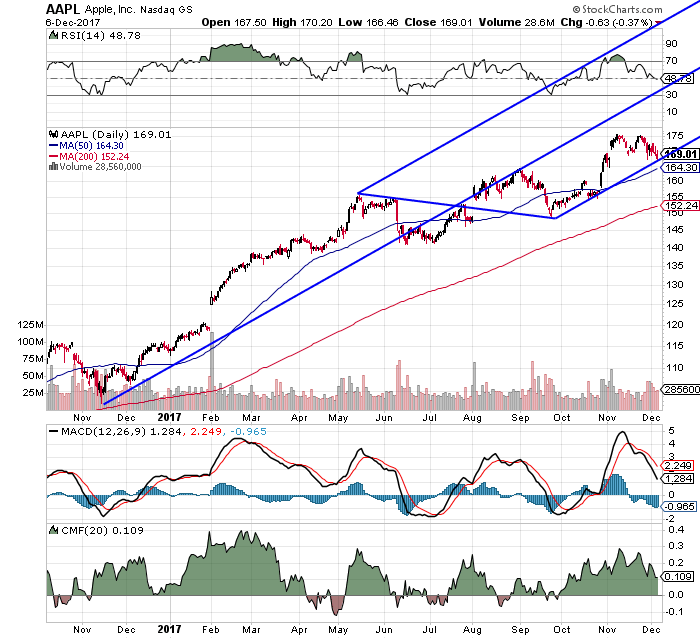 The Pitchfork model kind of tells me a lot. Support suggested by the model is not broken. In fact, we find ourselves at an important juncture right now. This $169 level looks to be key. A trader who has already taken some profits in the name and enjoys a lower entry point might play games on the out. Traders who got in after earnings and are down in this name should, in my opinion, play it tighter than that. My revised targets:

Panic Point: Raised from $141 to $152 for those sporting a positive P/L in the name. For those who got in late and are hurting, I would suggest sticking to the 50-day simple moving average (SMA) of $164 as a stop-loss. Just my opinion.

Apple, incidentally, is a holding in the Action Alerts PLUS charity portfolio that Jim Cramer co-manages.

These are my levels to watch today for where I think that the S&P 500 and the Russell 2000 might either pause or turn.

Get an email alert each time I write an article for Real Money. Click the "+Follow" next to my byline to this article.
TAGS: Currencies | Markets | Financial Services | Investing | Technology | Economy | Gold | How-to | Risk Management | Stocks