The media officer, and maybe the person in charge of investor relations, at United Technologies  (UTX) could be under increased pressure lately as the issue of moving jobs overseas has become a talking point with the media and the new administration. Let's look at the charts and indicators to see if this topic could be having any impact.

In this twelve-month daily chart of UTX, below, we can see a two-phase market. The first phase, in my opinion, is a rally from the January/February lows to the late April highs. This advance lasted just three months, but it logged the majority of the gains seen this year.

Contrast this with the quick peak in August and the price action in November. See the difference? I believe the added time spent in the lower half of the range has been accumulation (buying). With prices near the top of their range recently and the slopes of both the 50-day and 200-day moving averages pointed up right now, UTX is in a stronger technical position than anywhere since May.

The daily On-Balance-Volume (OBV) line rose in phase one and has been steady since May. Lower price lows in September and October diverge bullishly from the higher momentum lows in the same timeframe.

In this three-year weekly chart of UTX, below, two out of three of our indicators are bullish. Prices are above the rising, 40-week moving average line.

The trend-following Moving Average Convergence Divergence (MACD) oscillator has been in bullish territory (above the zero line) since April and just gave us a fresh buy signal, with the two averages of the oscillator crossing to the topside. The only indicator that is not in gear on the upside is the weekly OBV line, which is pointed lower and suggests that there has been selling of UTX into strength. 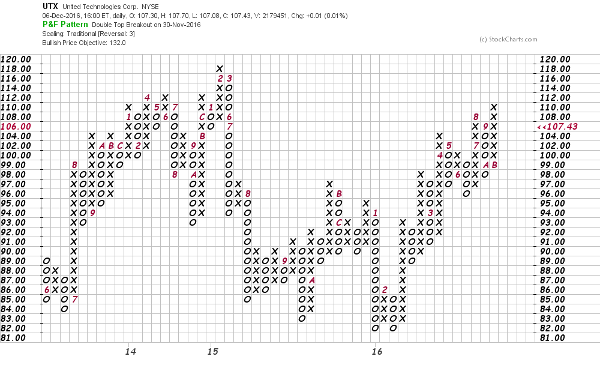 In this Point and Figure chart of UTX, above, we just concentrate on price. We ignore volume. We ignore time. We have not added any time-based indicators. UTX just made a new high for the recent move up, and the longer-term price target for UTX measures to $132. Not bad.

Get an email alert each time I write an article for Real Money. Click the "+Follow" next to my byline to this article.
TAGS: Investing | U.S. Equity | Regulation | Markets | Technology | Economy | Politics | Jobs | Stocks