Jim Cramer recently highlighted People's United Financial (PBCT)  as one of 10 companies that could be acquired in 2017, saying KeyCorp (KEY) should buy this fellow regional bank and noting that KeyCorp's purchase of First Niagara earlier this year has produced tremendous dividends for shareholders already.

Looking at PBCT's charts, the stock is extended in the short and intermediate term. It is likely to either trade sideways or lower. Longer term, however, we have higher price targets. These higher price objectives could be seen if PBCT is a potential takeover target.

In this daily chart of PBCT, above, we see a sideways chart or trend until mid-October. In the second half of October the price of PBCT goes sharply higher as the perception of bank stocks changed rapidly. A couple of positive clues preceded this price strength. A bullish golden cross can be seen in September as the 50-day average line turned up above the slower 200-day average.

The daily On-Balance-Volume (OBV) line turns in January and rises the entire year confirming and foreshadowing the price gains. The 12-day momentum study is the worry with a very strong reading above the zero line in November. If PBCT pushes up to a new price high it is very likely that it give us a lower momentum reading and thus a bearish divergence.

We decided to use a Japanese candlestick chart for our weekly perspective to help with explaining our reluctance to buy PBCT at this juncture. In this weekly candle chart of PBCT, above, you can see upper shadows (the distance from the close to the high of the bar) above the $18.50 level. Prices are above the rising 40-week moving average line and the OBV line confirms the price strength.

The Moving Average Convergence Divergence (MACD) oscillator has been above the zero line since August. Successful use of candlestick charts depends on three things. First is a trend to reverse. Second is the right shaped pattern. Third is confirmation. We would need a bearish candle to follow this week's high wave pattern. 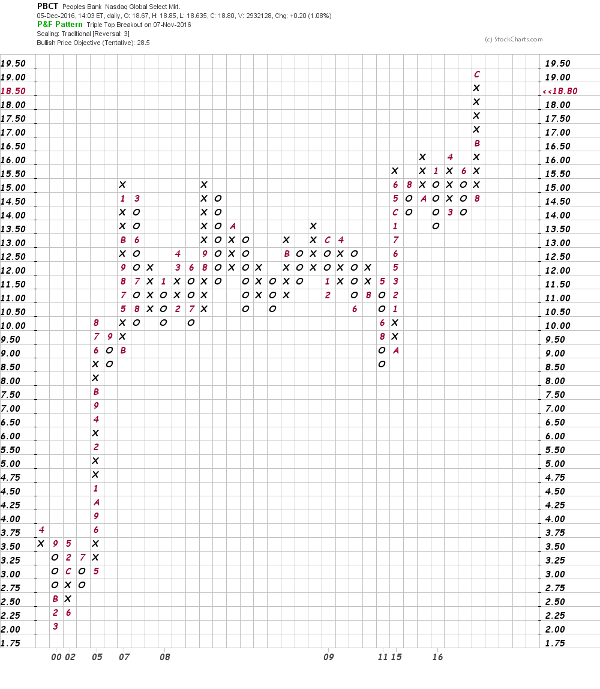 This Point and Figure chart of PBCT, above, shows the breakout over $16. The consolidation before the breakout yields a price target of $28.50. I don't deny that PBCT can reach $28.50 at some point but in the short run I anticipate a correction of some sort.

Get an email alert each time I write an article for Real Money. Click the "+Follow" next to my byline to this article.
TAGS: Investing | U.S. Equity | Financial Services | Mergers and Acquisitions