Jim Cramer recently highlighted Cypress Semiconductor (CY) as one of 10 companies that could be acquired in 2017, saying Advanced Micro Devices (AMD) should buy the semiconductor company and noting Cypress has a strong balance sheet and is half the size of AMD, at an economic conference sponsored by our sister site TheDeal.com.

Yesterday, we looked at the charts of Advanced Micro Devices, Xilinx, Marvell Technology and National Oilwell Varco, which also made Cramer's list. Let's start off today with Cypress.

CY has been in an six-month consolidation pattern. Prices will eventually break out of this pattern and we would tilt the odds to the upside. The daily and weekly charts of CY suggest an upside move could begin sooner than later. Let's look closer.

In this 12-month daily bar chart of CY, above, we have at least two ways of looking at the price activity. First, we can see an impressive rally from a February low to an early September high. Another way to approach the chart is to consider the rally from February to June as part one and the price action since June as part two or a consolidation before the next move. The movement of the 50-day and 200-day moving averages could also be broken in two with a steady, but slow increase in the 50-day average in the first half and then several "tests" and crossings of the average line since July. The rising 200-day average line is tested in late June and early November.

The action of the On-Balance-Volume (OBV) line could be segmented from February to June as slowly positive and a choppier, but strong OBV line from July until now. The first phase is clearly stronger and the second phase suggests some profit-taking.

The Moving Average Convergence Divergence (MACD) oscillator has been above and below the zero line this year. The MACD oscillator is currently above the zero line but close to a new sell signal. The weekly chart should help us clarify the trends.

In this three-year weekly chart of CY, above, we can see that the stock is above the rising 40-week moving average line. The line was tested in October and could be tested again in the short run. The weekly OBV line turned up with prices in February and has also corrected with prices in recent months.

The MACD oscillator on this timeframe has been bullish since late May and looks like it is moving toward a new buy signal. 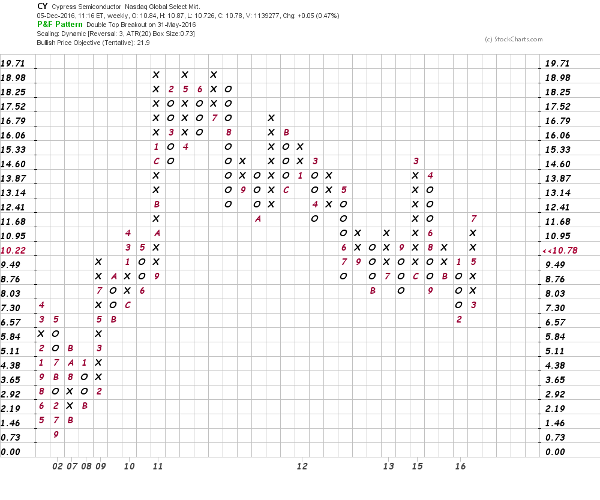 In this long-term Point and Figure chart of CY, above, we can see that prices are in a longer-term down trend from 2011, but a breakout would give us an upside price projection around $22. Not a bad move. We could get there slowly or a potential M&A deal could help CY get there a lot faster.

Get an email alert each time I write an article for Real Money. Click the "+Follow" next to my byline to this article.
TAGS: Investing | U.S. Equity | Technology | Mergers and Acquisitions

Some Sound Advice From Proofpoint Along With Some Bullish Charts

Nearly 20% of their customers are in the hospitality, travel and healthcare industries.