"True navigation begins in the human heart. It's the most important map of all." -- Elizabeth Kapu'uwailani Lindsey

Land navigation has always been fun for me. I was lucky. I could read a map and I could follow a compass, usually. There are times and places where navigating, at least before GPS devices were invented, became difficult. No natural or man-made landmarks. No roads. No chartered waterways to let you know if you were on the right track. There was one type of place where land navigation was particularly difficult. The jungle. No possible way to walk in a straight line there. No possible way to shoot a reliable azimuth at anything more than a few feet away. Truly dangerous, if you don't keep your cool.

We are the lucky ones. It really is not so hard to figure out just what is going on here. There are some peculiarities reflected in our markets that are making for some interesting trading patterns. For one, despite the intense intraday volatility, the S&P 500 opened on Thursday morning just below 2640 after markets caught wind that the U.S. Senate was making progress toward passing that tax reform bill. The index ran higher from there that day, collapsed mid-day on Friday in response to the now corrected ABC News story, only to rally later in the day to close where? Just above 2640. Then there was Monday's trading session, which saw this broad index of equity performance open much higher, only to see traders and algos take profits in gradual progression all day, allowing for a close in negative territory. Where? Just below 2640. Three days of extreme volatility, after an eternity of almost none, yet our market's broadest measure of performance appears to gravitate to one specific level.

Though these phenomena might make the equity market seem sleepy to someone paying only peripheral attention, there is almost incredible change going on under the hood. On a one-month daily chart, the Dow Jones Industrial Average now sports Relative Strength of almost 80. For those unaware, a number around 70 is usually where traders consider a security, or an index to be in an overbought condition. According to this measure, the Transports are now overbought as well, and the S&P 500 still is as well, despite the just-described flat line experienced since Thursday morning. You know what is not overbought? The Russell 2000. That one still has some work to do, but does seem to be making up some ground of late, and as an almost purely domestic index, tax reform actually targets those companies for improved earnings results.

A Horse of a Different Color

Now, the Nasdaq Composite is a horse of a different color. It's getting ugly over there. Relative Strength on the Composite is perfectly neutral on that month-long daily chart. That's clearly based on technology sector weakness. You want to get granular here? The Philadelphia Semiconductor Index (SOX) is very close to a technically oversold condition over the very same timeframe (speaking of semis, read this morning's article by Jim Cramer to see his take on the tech sector; he doesn't think it deserves the current battering). Last Thursday, I did explain in this space that for Lam Research (LRCX) , my panic point was $197. That spot was indeed hit that morning, and I did pull the trigger there, as well as in some other similar names.

Did I sell it all? No. That's not how I operate. I did sell the lion's share, though. I often mention that traders must understand where they want to go, and make sure that they have price targets. Panic points are just as important, and when you have a wildly successful run in a name, as many of us have had in these semiconductor-type stocks, levels that protect your gains and get you down to house money are very important. Forget actual forward-looking valuations. If that were all that mattered, then LRCX is still cheap. Hard not to notice that while LRCX and Nvidia (NVDA) make short work of the 50-day simple moving averages (SMAs), Intel (INTC) , Seagate (STX) and Texas Instruments (TXN) have all seemed to hang in there much better. Why? Modest year to date profits? Less to protect?

Making money in stocks is hard work. At least, it's supposed to be. If you've put in the hours and done your homework, all while suffering through the names that actually did cost you money, don't you think protecting your home runs and making sure that they don't turn into singles or doubles should be a primary objective? This isn't a game. Somebody is trying to take from you, every day. In the age of algorithmic, electronic trading, the pros have put the home-gamer at a disadvantage. Understand this. Fight. Learn to hate. These guys are trying to steal from your family, from your children. It is incumbent upon each and every one of us to raise two fists and work. If it takes 24 hours a day, seven days a week to be smarter than the algos (because you can't be faster), then so be it. Be smarter. Leave it all on the field. Let that fire burn.

The Death of Retail? Maybe Not.

Retailing is an almost entirely domestic business, particularly brick-and-mortar retailing. The current headline corporate tax rate, prior to any adjustment that might soon be made as the two houses of congress try to mesh their own versions of tax reform, is 35%. You all know that. You probably also know that across the S&P 500 the net effective tax rate is just 26.2%. What you might not know is that firms across the retail space are not so capable of reducing their effective tax rates. This group averages 35%. As a primarily domestic business line, these firms have also not benefited from this year's weaker dollar. Then on top of that, there is the obvious shift in consumer behavior away from walking the mall, and standing in line just to pay for your goods.

Well, guess who's hot? That's right. The retailers. Hot as a pistol. Wonder why the transports are so hot, or telecom? Same deal: domestic and highly taxed. At what point, though, are these sectors truly overbought? At what point, after adjusting for revised earnings guidance (still to be seen) for these firms, are they overvalued, barring a spate of mergers and acquisitions? By the way, acquisitions are seemingly back in vogue. When we see good companies paying too much for crap because they are having trouble growing themselves, that is when this clambake might be close to a wrap. We're not there yet, and that's a story for another day, but that's one thing that I keep an eye on.

The energy sector is another spot that is highly taxed, but that sector has provided us with clearly defined ranges of late, and the stocks themselves have been easily tradable. If you trade the sector, then at least of late, you have made money there. The retailers, though, have not traded in neat ranges like energy, so now, you've got to think about protecting gains. Let's go there, gang.

Chart of the Day: Kohl's

I have long pounded the table on behalf of two retailers: Walmart (WMT) and Kohl's (KSS) . My Walmart call, of course given the name and where I made the call, gained much more attention. However, Kohl's has been a sneaky good name, and pays an awesome 4.4% dividend yield. It has long been my premise that if you do not have the resources and the backing to confront Amazon (AMZN) the way Walmart can, then you have to cozy up to the e-tailing giant, the way KSS has.

First thing you notice on this six-month daily chart of the name is the bloated Relative Strength of 78. This reminds you that falling in love is dangerous, and you better have a plan in place. Yes, prepare, despite a rosy picture for tax reform. Here you see a moving average convergence divergence (MACD) that suddenly has the 12-day exponential moving average (EMA) reaching for the heavens, as both that 12-day and the 26-day violently cross over the nine-day. Then there is money flow, which obviously has had a fantastic November. 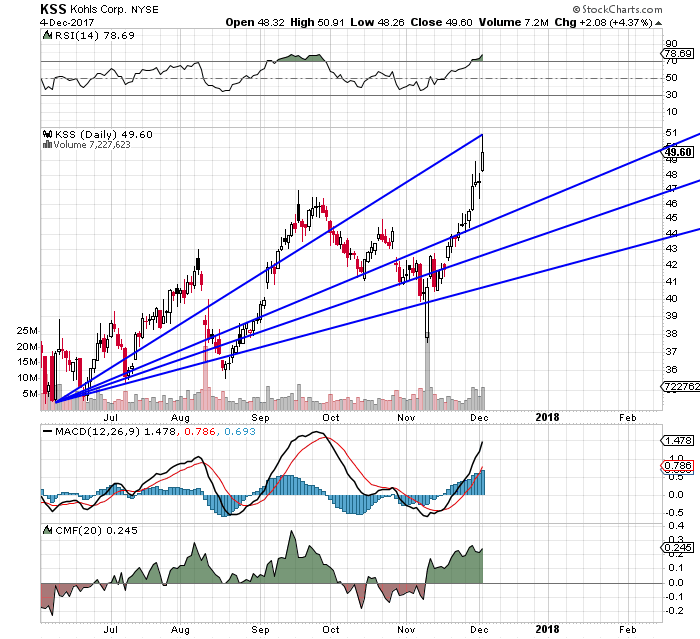 Now, my moderate target for this name is $51. That level was reached at Monday's highs. I trimmed just a small slice. My secondary target is $58. That's where I really want to go. I left those models off this chart, as they made the chart too crowded, and I am trying to show you one way to identify panic points, when my standard models just don't look right to me.

One method I use at times (definitely not always) like this is known as the Fibonacci Fan. Can be used in an upward trend, or a downward trend, but you pretty much need a trend. Tracking that trend from low to high and extending the chart into the future, one can lay out fanned levels simulating 38%, 50% and 62% re-tracements based on a trend that adjusts for time consumption. In other words, based on this model, I would start to worry about KSS round $44.50 if the stock were to get smoked today. However, in a month's time, I would likely either bail out, or re-load somewhere around $46.75. Understand? Keep in mind that this tool is a hand grenade, not a sniper rifle.

The stock will not be stagnant. I have often told you that you can change price targets once. That's my own time-tested discipline. Changing targets more often allows me to get sloppy, which if left unguarded even once, and heavens forbid, being allowed to succeed, would ultimately lead to failure on bigger, more important battlefields. That's my opinion. Panic points? I allow for myself unlimited change.

Get an email alert each time I write an article for Real Money. Click the "+Follow" next to my byline to this article.
TAGS: Investing | U.S. Equity | Consumer Discretionary | Consumer Staples | Technology | Markets | Economy | How-to | E-Commerce | Risk Management | Stocks