The "FAANG follow-through" continues this December.

FAANG stocks -- the group of stocks made up of Facebook (FB) , Apple (AAPL) , Amazon (AMZN) , Netflix (NFLX)  and Google's parent company Alphabet (GOOG) (GOOGL) -- continue to lead the market higher as we head toward the final stretch of 2017. On average, the FAANGs are up 47% year-to-date, and they're not showing any signs of slowing down. FB, AAPL and GOOGL are holdings of Action Alerts PLUS.

But it's the group's "laggard" that is showing the biggest upside potential right now. Alphabet has had the most restrained gain of the group this year, up 31% since the calendar flipped to January. That's phenomenal year-to-date performance by pretty much any other measure (it's almost double the rally of the rest of the broad market, for instance).

Compared to the rest of the FAANGs, though, Alphabet's surge looks downright modest.

That could be about to change, however.

Alphabet is testing a key level Tuesday that could act as a springboard for higher share prices in the weeks ahead. Already, it's propelling shares around 2% higher in this afternoon's session.

To figure out how to trade Alphabet from here, we're turning to the chart for a technical look: 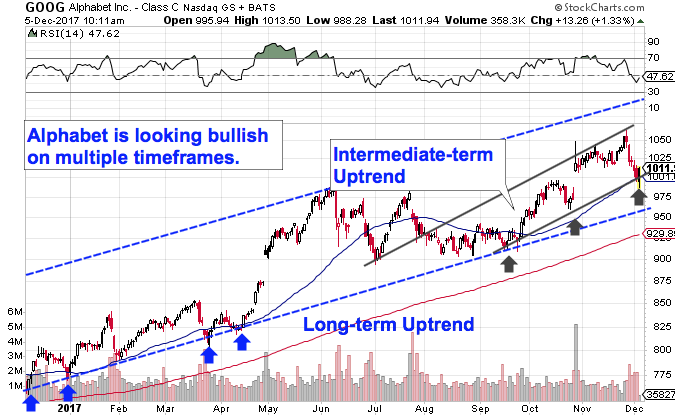 You don't have to be an expert technical trader to figure out what's been happening in shares of Alphabet all year long -- this stock has been in a well-defined long-term uptrend since before the start of the year. Shares touched trendline support back in the middle of September, clearing the way for a big bounce higher.

On an intermediate-term timeframe, we're seeing the exact same technical trajectory, albeit in miniature. Alphabet has been in an accelerated uptrend since that mid-September low, catching a bid on the last test of trendline support just before the calendar flipped to November. Now, as shares test that technical price floor for a third time this week, Alphabet is rallying in reaction to the test.

Simply put, Alphabet is a "buy the dips" stock this December -- and we're getting a very buyable dip Tuesday.

Look for Alphabet to test new all-time highs this month.

Get an email alert each time I write an article for Real Money. Click the "+Follow" next to my byline to this article.
TAGS: Investing | U.S. Equity | Technology | Entertainment | E-Commerce