We've correctly called the OPEC production agreement and banked some nice additional profits in our oil stocks going into the end of 2016. It's already been a great year for oil stocks, but what will 2017 hold? One way to look at the prospects for oil, and therefore oil stocks, is by looking at the curve of crude prices -- the way that individual monthly prices for the futures shape up. And here, despite the intuitively negative look, is where things look most positive.

Oil is delivered in monthly contracts, and each contract trades separately. These prices, once arrayed on a screen, lay out the futures "curve," that is, how markets are looking at the future prices of crude oil. I've dealt with all kinds of futures curves in my 30-plus years of trading oil, but one thing you can't say is that the curve is really predictive of the future. More often than not, it is a better outline of what the traders and hedgers are doing than what they think the future price will be.

Here's a look, below, at today's curve. 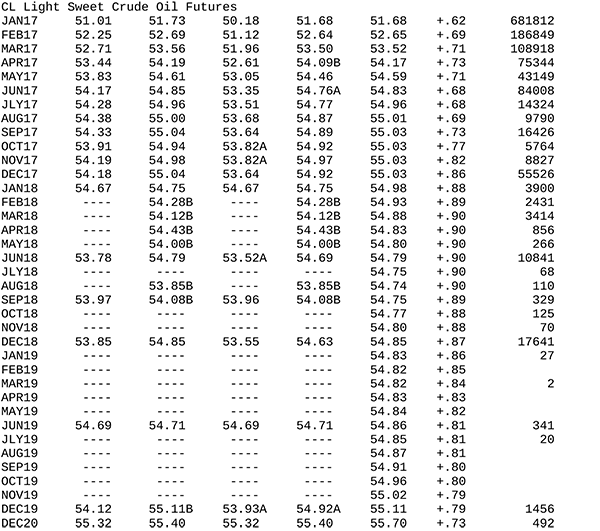 These numbers represent a huge difference from the numbers we saw even a week ago before the big OPEC deal in Vienna. At that point, we had been seeing a deep contango market, where oil prices in the future were a lot higher than where they were trading in the front (present) months. This has been the nature of the crude curve since the oil markets began to crater in late 2014 and have been a staple of crude trading ever since. But what does a contango market mean?

Many like to look at contango markets as a signal of crude storage, and that is true -- but a simpler way to look at it is mine: Most participants realize that the markets are busting, know that low oil prices are unsustainable in the very long term because costs of retrieval fall above the trading price, and bank on a recovery of prices somewhere in the future. You could say that a contango market is dominated by the speculators, who are willing to buy (bet) on higher prices later on.

But what of producers who are looking to hedge? In a busted market, they are retreating in capital expenditures and working wells, biding their time and trying to survive to see the next boom. But as prices begin to recover, they will now look to the future themselves and try to hedge future production that will correspond to new drilling they want to plan for in the coming up-cycle. During these time, speculators like to move even further out on the curve (more into the future) while producers (commercials) are looking to sell futures 12-24 months out. Suddenly, you have a curve that is being more dominated by commercial players, looking to lock-in profitable prices and plan for restarts of production.

You may remember that I nearly perfectly called the bottom in oil prices by merely looking in January 2016 for the turnaround (the flattening) move of the crude curve (my most important oil column). Today, there's been another massive move in the oil spreads, and we're looking at a market that has, in the space of days, moved more than $2 in 12-month spreads to reach new backwardation (premium): 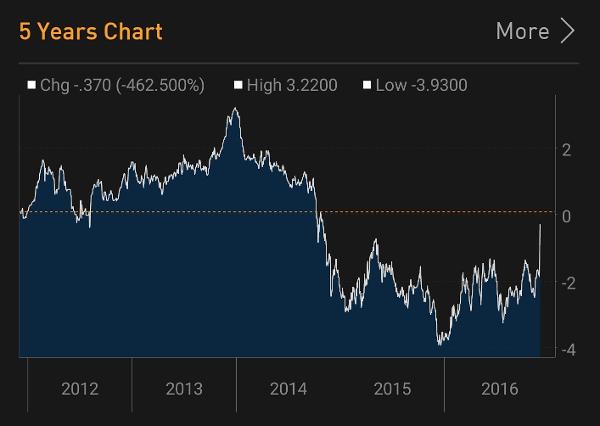 This shows to me just how sustainable our rally is, even if it isn't a direct move up. I'm convinced we're going to continually make constructive progress in oil prices throughout 2017.

Let's look, as a practical matter, at why a premium (backwardated) market is absolutely required to see a long-term recovery in oil.

Imagine you're a shale producer here in the U.S. You've just seen prices move from $45 to $52, at least in the front-trading months. This is great. Let's say you've needed $55 a barrel to restart some non-core acreage that you could have producing by June 2017. With a deep contango, a $3 premium might not have been much to ask. We've actually seen as much as a $12 discount between front and back months during the crude bust. If those prices exist, you lock in prices, borrow some money and wait until June to make your locked-in profits.

But you're not alone in this thinking - every other producer is trying to do the same thing. And, if they're successful, they'll simply again restore the gluts that have plagued domestic markets with low prices for the last two years.

If you think about it, a premium market, where prices in the future are lower than present prices, works to discourage fast restarts and quick restoration of gluts that a two-year rebalancing process has only slowly managed to fix. Producers have to be wary of adding wells so quickly, even in a market that is clearly rebalancing and rallying. They cannot merely lock in profits and move merrily along. They must wait, or speculate, both of which they'd rather not do. In a truly backwardated market the futures work to keep the rebalancing process on track and production increases slow.

Again, looking back on the December-to-December spread chart I put up earlier, you'd see that a premium, backwardated market was a critical component to the bull markets in oil prior to 2014. It still remains one of the most important indicators I count on to making long-term predictions on oil.

And one you should watch, too.

Get my insights free in your inbox. Sign up at http://dandicker.com.