Jim Cramer recently highlighted Advanced Micro Devices (AMD) as one of 10 companies that could be acquired in 2017, saying that Micron Technology (MU) looks like a great suitor. Readers of Real Money should know that I am just a simple technical analyst, and though I have passed the Series 86 exam I won't comment on the merits of two companies hooking up. Let's just stick to the charts and indicators today.

"I could see Micron soar on this," Cramer said at an economic conference sponsored by our sister site TheDeal.com.

Now, Real Money readers should know that I'm just a simple technical analyst, and although I've passed the Series 86 exam, I won't comment on the merits of two companies hooking up. Let's just stick to the charts and indicators today.

Deal or no deal, AMD has been a great performer this year with a strong uptrend that even the casual watcher cannot miss. In this one-year daily bar chart of AMD, above, we can see that AMD is comfortably above the rising 50-day and 200-day moving averages. Take notice of the volume histogram below the price chart -- volume has been expanding in the direction of the trend -- just what chartists like to see.

An easier to understand picture of volume comes from the On-Balance-Volume (OBV) line in the middle panel. The OBV line rises when the volume of trading is heavier on days when AMD closes higher. The OBV line has made new highs along with the price action.

In the bottom panel is the 12-day momentum study. There was a small bearish divergence between the price action and the momentum study but the new highs in November has neutralized that potential warning.

Sometimes stocks look good in the short-run (daily) but are not so impressive on a longer-term basis (weekly). AMD has a strong weekly chart, above. AMD broke out of a base pattern lasting about 19 months. The breakout in April when AMD broke above $3 is clear on this chart. The price action in August through early November looks like an equilateral triangle. AMD is above the sharply rising 40-week moving average line.

The weekly On-Balance-Volume (OBV) has been rising all week. The weekly Moving Average Convergence Divergence (MACD) oscillator has been above the zero line since March and just crossed to a new go long signal. 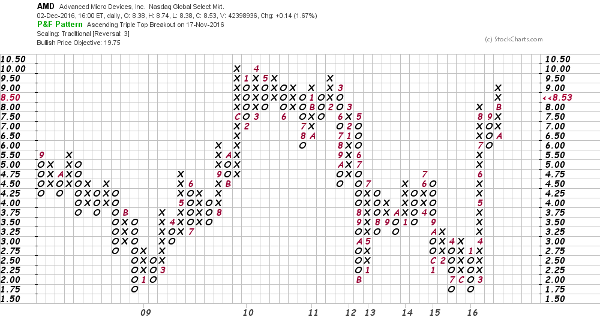 In this chart of AMD the breakout is clearly a trade at $10.50. The long-term price target is $19.75. Maybe $19.75 could become the price offered to shareholders if (repeat if) AMD was acquired.

Let's see how things turn out next year.

Taking a Feeler on Livent

Here's where I'd add to my position with this lithium compounds firm.

Among other things, results revealed that quite a few firms are now facing a higher bar, and that reopenings have begun affecting consumer behavior in a number of ways.