We last reviewed the charts and indicators of Walgreens Boots Alliance (WBA) in June, and we commented that "WBA has declined $10 in the past two months, from $88 to $78, and this may be a shift from a sideways trend to a downtrend. It is hard to tell if $76 will be broken, but honestly, it does not look like strong support."

With a few months of hindsight, we can see (first chart below) that $76 held in late June and WBA firmed slowly to September, and then the subsequent decline broke $76 in October, with prices making a low around $64 at the end of October. Prices have rebounded the past five weeks, and with CVS (CVS) in the news, a fresh look at WBA seems in order.

In this updated daily bar chart of WBA, below, we can see that prices have not (yet) retraced 50% of the September-October decline. The $76-$84 area is likely to act as significant resistance. Prices are above the 50-day moving average line, but its slope is still bearish.

The 200-day moving average line is well above the market and pointed lower. Volume was heavy into the late October price low, which suggests some "throw-in-the-towel selling", but the On-Balance-Volume (OBV) line only made a small recovery and has been neutral for much of November.

The trend-following Moving Average Convergence Divergence (MACD) oscillator crossed to a cover shorts buy signal in late October, and looks like is has crossed above the zero line for an outright go long signal.

In this weekly bar chart of WBA, above, we can see that after a long sideways trading pattern for WBA, prices have been in a downtrend the past several months. The slope of the 40-week moving average line has been bearish since June.

The weekly OBV line has been pretty volatile lately, with a sharp up-move, down-move and recent up-move. It is hard to say if there has been any sustained liquidation or accumulation. The weekly MACD oscillator has narrowed towards a possible cover shorts buy signal, but it hasn't crossed it just yet. 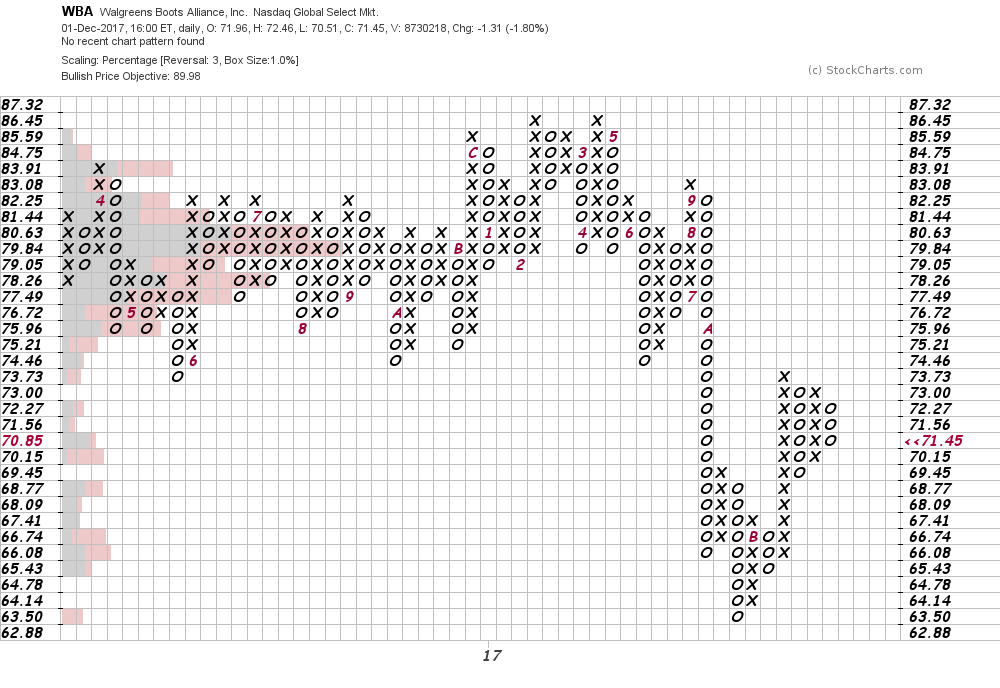 This updated Point and Figure chart of WBA is interesting. There is an upside price target of $89.98 shown, but there is also a big band of resistance, from $75.96 to $83.91 looking at the volume at price data (left side of the chart).

Bottom line: the charts of WBA present a tough call. The late October low seems like it should hold, considering the increased volume seen, but new accumulation is not presenting itself in the typical ways with a rising OBV line and stronger moving averages.

With a significant band of overhead resistance, I suspect that WBA will need to trade sideways between $66 and $76 for some time before attempting a sustained upside move.

A Trio of Back-to-Normality Trades Worth Noting

With lockdowns ending and life as we knew it resuming to some extent, these three stocks should benefit.

Cannabis Cos. Ready for Sales to Heat Back Up in Massachusetts

State's dispensaries get OK to reopen recreational curbside service on May 25.