The major indices have had a great run since the U.S. Presidential election, but not every stock has been along for the ride. Tesla Motors (TSLA) has badly underperformed the overall market since the election, and according to the charts, the stock still has a rough ride ahead of it.

First, we'll compare the performance of Tesla (red) to the SPDR S&P 500 ETF (SPY) (green) since the start of November. The post-election rally may be losing steam, but Tesla's lack of participation could be indicative of deeper problems to come. While the major indices have been scaling new heights, yesterday Tesla finished the day just $0.30 above its lowest closing price since February. 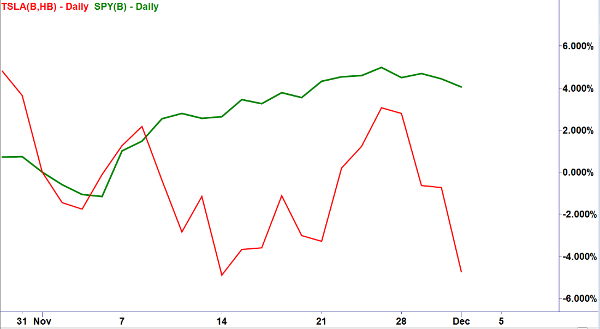 In the chart below, Tesla is threatening to break down from a descending triangle pattern (dotted lines). A close beneath $180 will break the lower boundary of the pattern, and simultaneously place the stock at an eight-month low. The bearish pattern projects Tesla to the $150 area, not far from the stock's year-to-date closing low of $143.

Another sign of weakness is the tremendous amount of difficulty Tesla is having with its key moving averages. In early October, the stock fell after colliding with both its 50-day (blue) and 200-day (red) moving averages, which were in the process of forming a death cross (point A).

Then in late October, Tesla managed to break through its 50-day MA, only to decline sharply after crashing into its 200-day MA (point B). Last week, the stock plunged again after hitting its 50-day MA (point C). In recognition of this price action, traders may want to consider a strategy of shorting the stock when it rises to one or both of these moving averages. 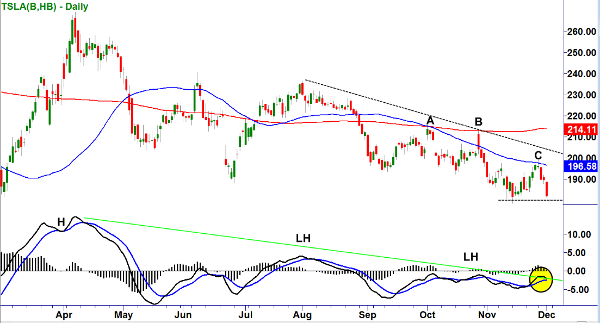 Tesla's MACD (moving average convergence divergence) indicator is also revealing a bearish pattern, in the form of a series of lower highs (LH). The indicator is suggesting that the stock will move lower, which would necessitate a break of the descending triangle pattern. Tesla's MACD is also on the verge of flashing a sell signal (shaded yellow).

The latest controversy surrounding this stock involves its accounting methods. According to the Wall Street Journal, Tesla has drawn the attention of the Securities and Exchange Commission for using "individually tailored" accounting practices.

While the company hasn't been charged with any wrongdoing, I imagine the SEC will be keeping a close eye on Tesla's future earnings reports. This might make it more difficult to engineer a strong report, as it did last quarter.
Get an email alert each time I write an article for Real Money. Click the "+Follow" next to my byline to this article.
TAGS: Investing | U.S. Equity | Consumer Discretionary | Industrials