"We really can't forecast all that well, and yet we pretend that we can, but we really can't." -- Alan Greenspan

The "take'em" bots came out to play on Thursday. Stocks rallied hard in the morning, softened a bit as the day wore on, and then finished strong on some decent volume. The enthusiasm generated by the improving macro, as well as perceived progress toward the passage of the Senate tax bill, was more than enough to absorb projections of pension fund mandated month-end rebalancing outflows of roughly $9.0 billion (domestic). Oh, yeah... take 'em.

The train was running along at full speed after Arizona Senator John McCain finally got behind the bill. McCain made the necessary points as he stated: "I believe this legislation, though far from perfect, would enhance American competitiveness, boost the economy, and provide long overdue tax relief for middle class families." Who doesn't want to boost the economy and compete globally while coming to the aid of middle class families? Rock on.

Wait a second ... I think there's something on the tracks ahead. Better slam on the brakes. Uh oh. Debris on the tracks -- aka, The Joint Committee for Taxation. "The who?" No, that was a pioneering rock band that came from England in the 1960s. The Joint Committee for Taxation is the crew that tries to make the call on the fiscal implications of any tax legislation that might move forward announced late on Thursday afternoon that this plan's projections for growth might be a little too optimistic. Expected revenue generation would perhaps come in a bit light. Hmm. Perhaps we should sell some equity index futures overnight, and buy back some Treasuries. Oh, I see you've already though of that. Nice job.

Steven Mnuchin, Secretary of the U.S. Treasury, is a pretty sharp guy. Mnuchin hasn't really made a career of regularly screwing things up. Well, Mnuchin has been clear for most of the year. He feels that proposed tax cuts would indeed pay for themselves through growth, and this development that forecasts a revenue loss of about $1.0 trillion over a decade does not support his view. The Joint Committee only sees the deficit reduced by a little over $400 billion over those ten years. Yes, the markets did get a little ahead of themselves on Thursday. At least in the early going, this will inspire some profit-taking for traders who found themselves up a bit more than they expected after the Thursday run. The deficit hawks in the Senate will be forced to make some noise today. Could be a lot of noise.

That will cause volatility. Hey, increased deficit spending unsupported by revenue growth would at least push out the long end of the yield curve, and possibly even weaken the currency. Those would be positives in the short term -- maybe not so much down the road. Politics. S&P earnings expectations for 2018 are running at about $146. Just doing the math in my head, you can probably add a rough $19 there, should the headline corporate tax rate drop from 35% all the way to 20%. The crew in the Senate may have to work their way from 20% up toward 25%. Each percentage point is worth about $100 billion of revenue over 10 years, according to the kids who actually do the math on paper. Game on.

WTI Crude pushed back up toward the $58 a barrel level in response to the deal reached by OPEC and other major oil producers to extend the curbs on output through year's end 2018. The energy sector responded well on Thursday, as a couple of chips that were in play actually fell the right way for the group.

The most significant of those chips was the prospect that Russia might not be fully on board with the idea of extending production cuts quite that far. It had been known that there was some pressure from the Russian private sector to start boosting production once the older deal expired this March. Will there be a discipline problem? So far, with some relatively minor hiccups, compliance has been good, and one can not argue with the success that these cuts have had in re-balancing the markets. Of course, global demand for crude has been rising the whole time.

Remember that most of the world's economies are growing at the same time. Demand is not going anywhere, except higher, in my opinion. U.S. shale output remains the question mark, and at these prices seems poised to increase as well. The former cartel is counting on this rising demand to absorb this increasing competition. Perhaps key to note is that this time around, both Libya and Nigeria will see production capped. While constructive, compliance here will be something that the Saudis will have to stay focused on. For me, I'll stick with the Permian and oil services, for now.

Know what I have been buying in baby steps over the last couple of days? Did you miss Alibaba on the way up? Did you look for a point of entry without reverting to an old-fashioned car chase? Me too. The FAANG types have seen less favor in the marketplace this week than they had prior. I consider Alibaba to be a FAANG-type name, so I took a look.

Then there was this week's $7.0 billion bond sale, which apparently went off with something like $46 billion worth of subscription. This despite the firm already having $22 billion worth of cash and cash equivalents on its balance sheet. The firm sold the debt in tranches with maturities running out 5.5, 10, 20, 30, and 40 years, in dollar terms. Two things about these dollar-denominated bonds catch my imagination. One, obviously selling dollar-denominated debt attracts a broader audience, thus reducing borrowing costs. The sale did go off well. That worked out. Secondly, Alibaba must be comfortable earning large slices of incoming revenue in yuan, and paying off long-term debt in dollars. See where I'm going here? Food for thought, gang.

Chart of the Day: Alibaba

So, let's take a look at a chart on Alibaba (BABA) that dates back to early June when the stock really started to cook. What strikes me is the negative money flow, which seems to have persistently fluctuated toward the negative since mid-September. Another significant indicator has been the moving average convergence divergence (MACD), which has illustrated for us a series of bearish crossovers of the 26-day EMA by the 12-day EMA that began in August. Mind you, both of these moving averages remain above the nine-day EMA, which I'll take as a mild positive.

Now, take a look at the Pitchfork. Worked like a charm, until it didn't. You can see that the lower trend line broke earlier this week and has not recovered. In fact, the 50-day SMA broke as well, despite having worked as support two weeks ago. Now, this stock has come a long way. It could, in fact, fall even more. I do like the way Jack Ma is thinking, though. He's being innovative, and aggressive, and not just for the short-term. Over the last two days, I have put on about one-tenth of what I am willing to get long here.

My thought is that every investor should have a shopping list of names that they wish they had bought, but missed, and then get involved when they go on sale. For Steve Guilfoyle, this was one such name. Don't be timid. I actually see this stock falling as far as $168, but I really do not know if that level will either be reached or even hold if reached. What I think I do know is that next year I want to say that I bought Alibaba this year. 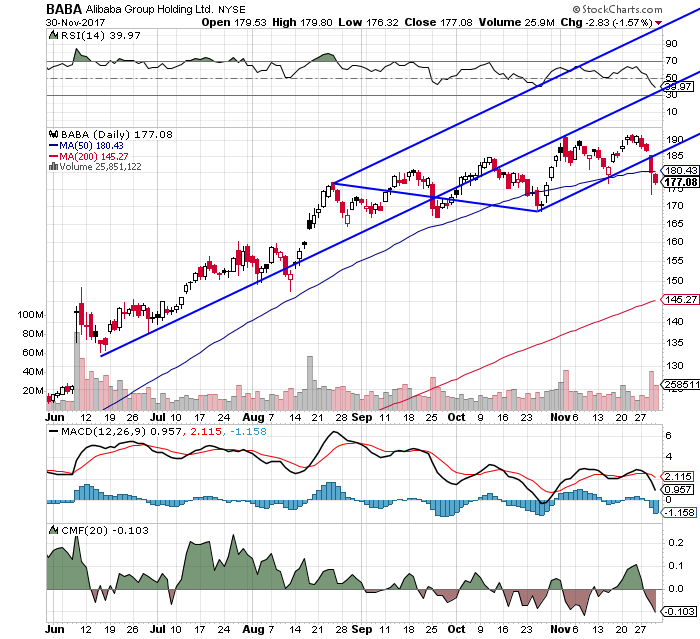 Get an email alert each time I write an article for Real Money. Click the "+Follow" next to my byline to this article.
TAGS: Investing | U.S. Equity | Technology | Markets | Economy | How-to | E-Commerce | Politics | Risk Management | Stocks