First, a victory lap -- I was one of the very few (I believe Francisco Blanch of BofA was the only other) to strongly predict a substantial cut at the OPEC Vienna meetings on Wednesday. In the last several columns, I had not only predicted that cut, but gave stocks to buy to play it, including Noble Energy (NBL) and Oasis Resources (OAS) , which were up 11% and 28% on Wednesday. Pretty good trades.

But as with all things, that's yesterday's news. Everyone wants to know what you're going to do for the next act, and where you predict oil prices and oil stocks to go from here. Of course, I have my thoughts on this as well.

First, an analysis of the agreement. I had expected something much more than window-dressing to come out of Vienna and, boy, did we get it. While I assumed that Saudi Arabia would in the end "go it alone" for the full brunt of the necessary 1.2-1.5m barrel a day cut if they had to, they in fact got a whole lot more from both other OPEC and non-OPEC participation.

Despite much pessimistic talk from both the Iranians and the Iraqis about being unwilling to accept any limitations on production, the only complete exemption was given to tiny producer Indonesia. For the Iranians, a full six-month freeze was agreed to, using secondary and independent production numbers, not those generated by the Iranians themselves. Iraq agreed in essence to similar terms.

This marks tremendous movement by the Shiite members in OPEC, halting their planned increases below both of their "golden" production goals of 4m b/d for Iran and 5m b/d for Iraq.

It was a stunning achievement for the Saudis and puts the OPEC cartel, which was prematurely thrown into the dustbin of history by most other oil analysts, back to the fore as the global generator of oil pricing.

If there's one thing I've learned through more than 30 years of oil trading, it is that if the Saudis say it, you'd better take it seriously. I did, and made some money. I hope you did too.

To show just how important this is for the quicker rebalancing of oil supply that was already on its way, have a look at this chart from Georgi Kantchev of the Wall Street Journal: 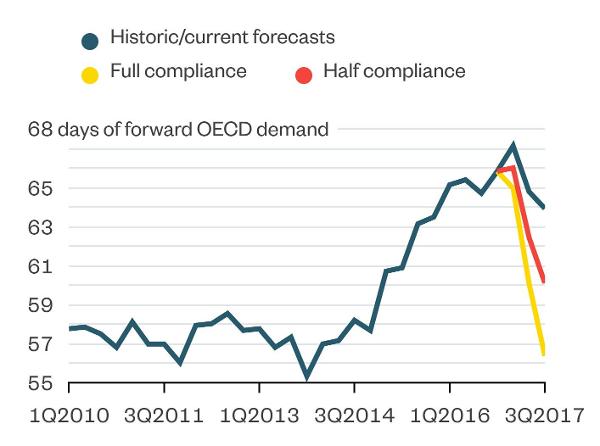 Even with moderate compliance, the cut in global supply will, by the end of the second quarter of 2017, drop global stockpiles back towards the 55-60 days coverage that marked more traditional modern markets and saw oil prices above $100.

That's not to say that prices are headed back to $100 or U.S. producers won't respond -- and the likelihood and extent of that response in terms of ramping production as prices creep higher is an important topic, where I have to cover the forward curve and the movement I think the spreads are about to make in response to the draining of the glut that's about to happen.

But all that is for the next column. For today, you need to know what to do, particularly with the stocks you already have, and the ones you're set to cash in on, after such a heady move.

First, I expect this oil rally to sustain itself into the end of the year, slowly, but certainly steadily. I expect to end 2016 between $52-$58 a barrel, with opportunistic buying to appear below $48 a barrel instead of below $42, before this agreement.

For specific stocks, I have these recommendations: in Oasis, if you bought it, take the money and run. It's reacted precisely as we expected with its enormous beta, and has perhaps another day or two of euphoria in it. But after buying it around $12, I'm happy to push it out as a great trade near to $18.

As for Noble, its recent $2 billion deal with the largest power company in Israel continues to shore up Leviathan prospects, making it easier to regard its very underrated Niobrara shale opportunity with favor. If you bought it around $34 as I suggested, you're already up $4 a share. Now, put it away as a longer-term play and let it ride.

And, if you've continued to follow me with Permian monsters like Cimarex (XEC) or the Centennial assets you got by the Silver Run Acquisitions (SRAQU) buy, don't even think of selling them -- they're going to stay at the core of our holdings.

It's been a very good week.

Get my oil insights in your inbox. Sign up for my webinar and free blog posts here.