Market jitters are running high again ahead of Italy's referendum, due to take place this Sunday, on whether to change the constitution to make it easier for the government to pass legislation.

A "yes" vote would empower the current government of Prime Minister Matteo Renzi to implement much-needed reforms. A "no" vote would lead to his resignation and a period of uncertainty. Opinion polling so close to the vote is forbidden under Italian rules, but the most recent surveys indicated a clear victory for the "no" camp.

A gauge of eurozone sentiment by Germany-based institute Sentix released earlier this week pointed to an increase in fears that the single currency area will break up. The perceived euro exit probability jumped to 19.3%, the highest level since the Sentix euro breakup index survey started. In the chart below, the blue line represents institutional investors, the red line, retail investors. 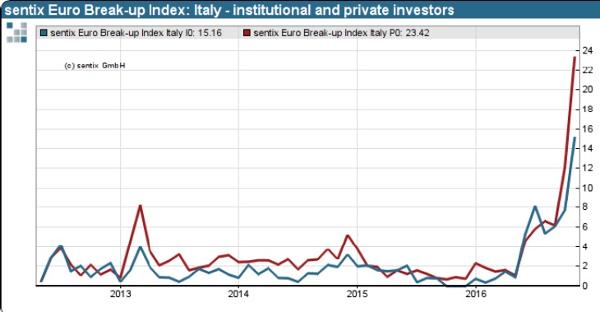 These jitters have been pushing down the prices of Italian assets. The iShares MSCI Italy Capped ETF (EWI) , the only ETF focusing solely on Italy that U.S. investors can access and which offers broad exposure to 85% of Italian companies ranked by market capitalization, has lost 20% year to date.

The yield on Italy's 10-year bonds has jumped to around 2% from a low of about 1.2% back in September.

It is a good opportunity for investors who like to be contrarians and enjoy taking risks (or have enough capital to be able to afford to) to get some exposure to Italy ahead of Sunday's referendum. I have been criticized for this stance before, with readers writing to tell me that I am too optimistic and noting that Italy has a toxic combination of high debt and high unemployment.

Be that as it may, I don't believe a "no" result in the referendum would be the catastrophe that is priced in by the markets. A "no" would indeed bring a period of heightened volatility, but I think those who believe Italy would leave the eurozone soon as a result of this vote are exaggerating.

Let's forget for a minute that the European Central Bank (ECB) is buying sovereign and corporate bonds like there's no tomorrow, effectively putting a floor under prices, and let's focus instead strictly on the specifics of this vote.

For one, Italian businesses are used to political crises. It's the way the country has operated for decades (and it is what Renzi wants to change things with the constitutional reform he is trying to push through). A "no" victory would only reconfirm the status quo, rather than upset things the way the Brexit vote has done in the U.K.

There are many observers who say the main danger following a "no" vote is that the Five Star Movement, a populist, Eurosceptic party created by comedian Beppe Grillo in 2009, would sweep to power and take Italy out of the eurozone, thus starting a chain reaction that would lead to the disintegration of the single currency area.

While this scenario could be why the fears of a breakup in the Sentix survey have jumped to their highest level ever, it conveniently leaves out a few arguments that run against it. The main one is that, consistently, surveys show that most Italians do not want to abandon the euro.

But even if they did, a referendum on euro membership would not mean the country would be free to just leave. The Italian constitution prohibits the repudiation of international treaties by popular vote, so another constitutional referendum would need to be called to change that provision.

All this takes time, and if there is one thing that populism fails, it is the test of time. Just like in the classic Mark Twain quotation -- or, rather, misquotation, but hey, this is a post-truth world -- reports of the euro's death are highly exaggerated.
Get an email alert each time I write an article for Real Money. Click the "+Follow" next to my byline to this article.
TAGS: Investing | Global Equity | Rates and Bonds | Markets | Financial Services | ETFs | Funds | Economy | Politics | How-to | Risk Management | Stocks