Dave and Buster's (PLAY) suffered a serious decline this year, but has held key support (former resistance) from 2015-2016. Is PLAY ready to rally again, or will it have an adult time out? Let's check out the charts and indicators. (In full disclosure, I pass by the Dave and Buster's in Times Square twice a week and I have never stepped in, though I do know people who enjoy going there.)

In this daily bar chart of PLAY, below, we can see that PLAY, after a decline from $73 to $46, has finally rallied above a flat 50-day moving average line.

The 200-day moving average line is still declining, and will take longer to reverse direction. The On-Balance-Volume (OBV) line peaked in June with prices, and only improved slightly this month.

In the bottom panel is the 12-day momentum study, which shows a bullish divergence in September to early November as it made higher lows, while prices made lower lows.

In this weekly bar chart of PLAY, below, we can see that prices are well below the declining 40-week moving average line. The weekly OBV line peaked in June and shows only minor improvement this month.

The weekly Moving Average Convergence Divergence (MACD) oscillator is below the zero line, telling us that the trend is bearish, but the two moving averages that comprise this indicator are close to a crossover and "cover shorts" buy signal (a buy in a downtrend).

In this Point and Figure chart of PLAY, below, we can see a small base or accumulation pattern, with an upside price target of $57.71. 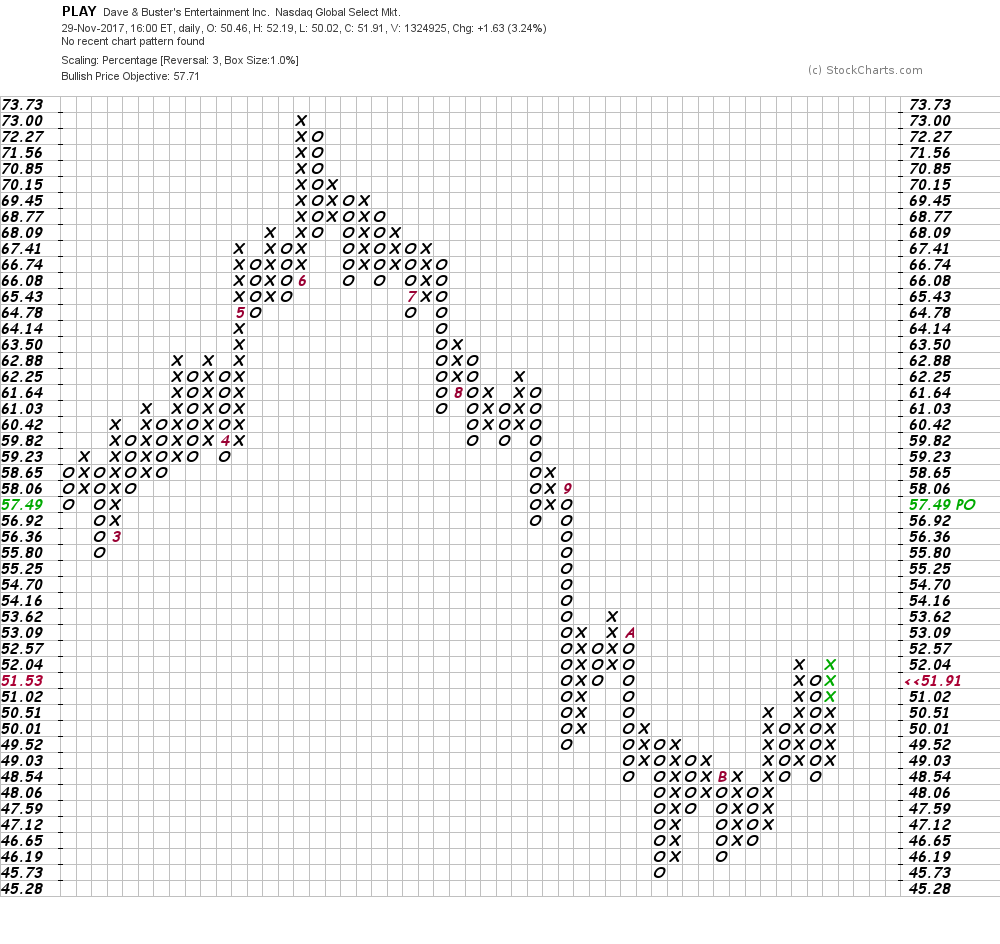 Bottom line: PLAY made a low at $46 in October and a successful retest of that level in early November. The price action over the past three months could support a rally to the $57-$58 area in the weeks ahead, but this means we still may not break out over the 200-day moving average line.

Get an email alert each time I write an article for Real Money. Click the "+Follow" next to my byline to this article.
TAGS: Investing | U.S. Equity | Entertainment | Gaming | How-to | Sports business | Stocks